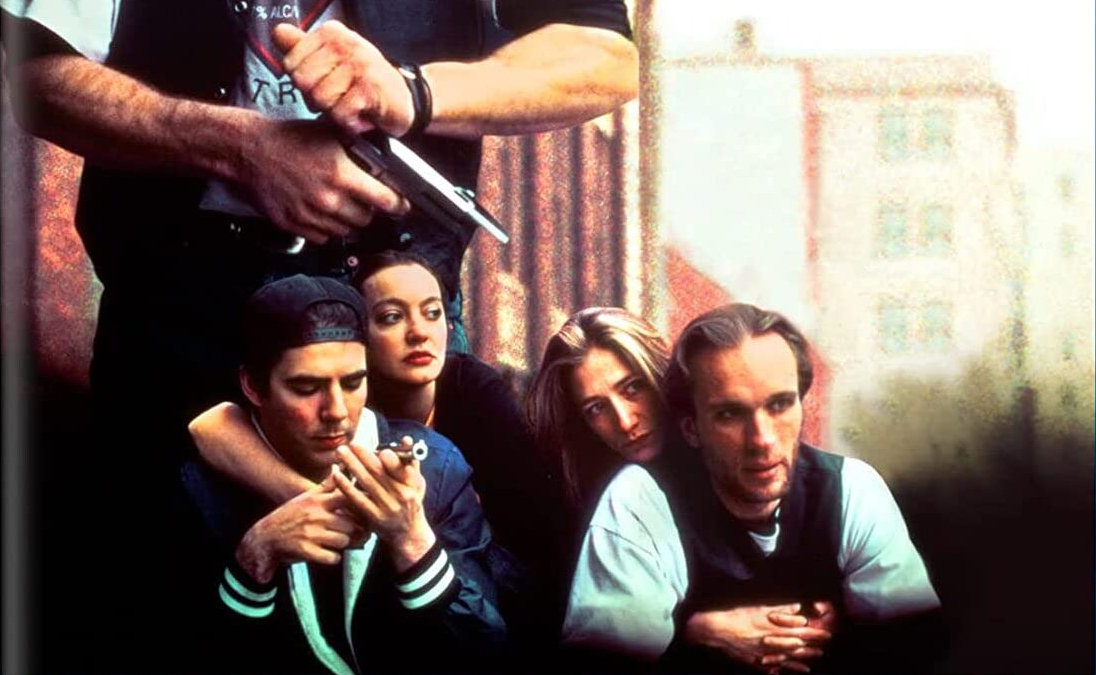 You can still the influence of Nick Gomez’s Laws of Gravity.  Even if it’s embedded into the DNA of the work of Elaine May and John Cassavetes to the Safdies or other NYC indie directors over the last fifty years.  His tale of small-time crime and big-time emotions and arguments is as fresh and raw as it was when it hit the scene thirty years ago.

Jimmy (Peter Greene) and Jon (Adam Trese) have their little ring of petty crimes that keeps them in some money and helping their respective girlfriends Denise (Edie Falco) and Celia (Arabella Field) out.  It’s only when freshly returned from Prison (and Florida) Frankie (Paul Schulze) shows up with a cache of unregistered Guns, things go quickly from okay to worst possible scenarios.  The trio brings the worst out of each other.  Jon the young hothead heeds no one’s advice about his reckless behavior or treatment of Celia.  Every piece of ego, stupidity, and anger rolls up into a final night that ends in bloodshed.

Laws of Gravity is a film that’s the sum of its parts.  That is to say, writer/director Nick Gomez has created a film that’s accumulative in nature.  That it isn’t just one piece that drives everything but rather every single moment and incident we witness is one step closer to the inevitability of violence.  Yes, many will say that Mean Streets was a heavy influence, but the rambling shambling nature of the film and its story would be otherwise.  Mean Streets though has a propulsive narrative drive – discretely hidden – that Laws of Gravity does not.  Rather Gravity is all about character and interaction that pushes any plot out of the window.

If one does not like the realism of Casevete’s overlapping loud and argumentative dialog should think twice before viewing this film.  Gomez’s film is one that feels like New York as something out of Mikey and Nicky or Uncut Gems.  There’s an aggressiveness and confrontational nature to everything that one can only understand if they’ve been to New York.  Some will find the affectation entertaining, and others will find it shrill and indecipherable.

If one loves the small-time crime thrillers of the 1990s without the post-Tarantino meta nonsense look no further than Laws of Gravity.

Kino Lorber delivers us an excellent transfer that retains all the grit, grime, and beauty of the 16mm shot film.  The reviewer having seen this theatrically and in multiple iterations on home video has always felt it was a muddled mess of photography.  On Blu-ray, the film is positively luminous.  The only caveat is there are a few minor scratches and minor blemishes but nothing that is truly bothersome.  The work that Kino has done here is impressive as it takes the murkiness out of the image leaving us with a beautiful clear, sharp image, with a wonderful patina of grain that reminds one of the beauty of 16mm shot movies.

The all-new audio commentary by Writer/Director Nick Gomez, Moderated by Historian/Filmmaker Daniel Kremer opens with Gomez discussing how he began the movie with a Budget ($35,000) rather than a script and as he describes a “movie made with a Bolex and two Clamp lights” and continues on with an all-around informative track.  Some of the details include one of the Producers was an Art Dealer who wanted to get into “the movies”, the formation of The Shooting Gallery Production – which was a big indie production shingle in the 1990s, the various odds and ends Production Jobs he did before making Laws of Gravity, how the script was specifically written for most of the lead actors – including Falco, Schulze, the casting of Greene – how James Gandolfini audition at the same time and why they cast Greene, how they achieved the improvisational style of the dialog and the direction, how they got all the music in the film – for free no less, a real-life incident between Greene and Trese on set – how this crystalized their performance, their work, and their personal relationship, how the shoplifting scene was created on set, the work of Production Designer Monica Bretherton, inspiration from the early work of Hal Hartley, the influence of Mean Streets, the dated language and behaviors that are unacceptable now – and his response to this and the current era, the amusing connections of petty crime and indie filmmaking, the lack of monitor/playback at the production and how it effected the production and his trust of cinematographer Jean de Segonzac, how the final scene and the method acting between the cast that ended up turning very physical and dangerous in real life, and much more.  Gomez starts and doesn’t relent in his commentary until the end of the film.  Which is a great thing as Gomez is a literal open book about the making of the film, the film itself, the techniques he used as a director to accomplish this movie, and much more.  This is truly one of the great commentary tracks of the year.

Laws of Gravity remains a riveting piece of indie crime cinema that Kino has treated with the respect it deserves.  Recommended.