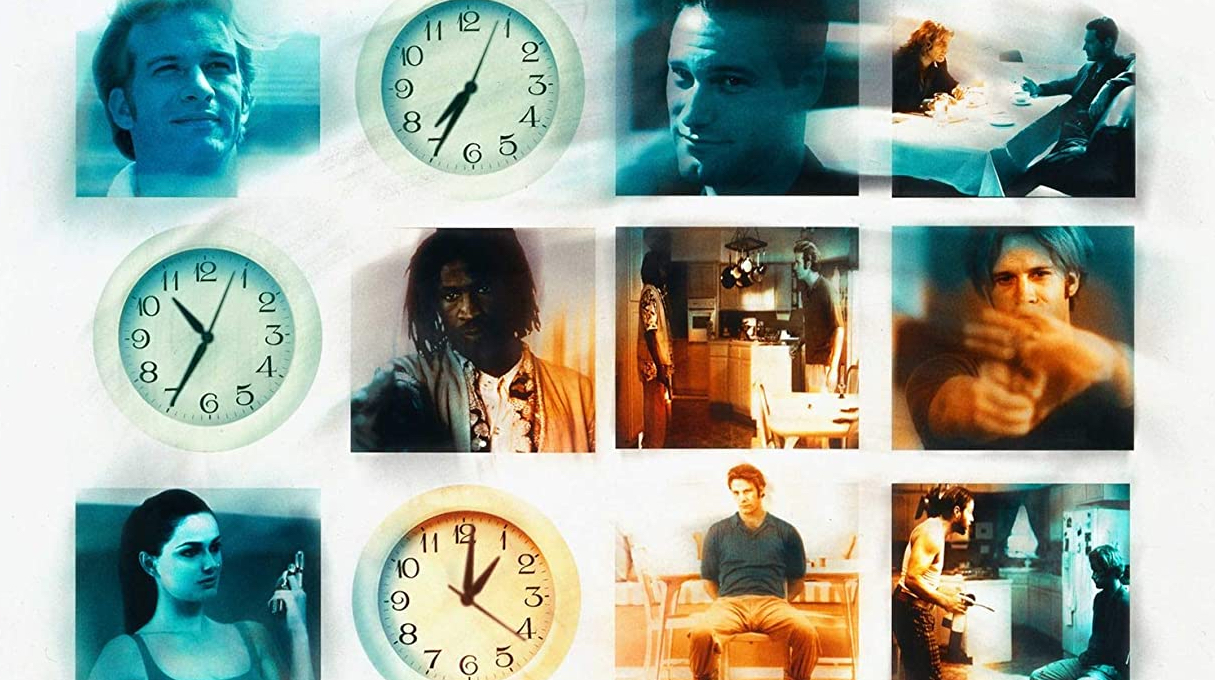 Thursday a late-90s Tarantino-Influenced Crime Dark Comedy is being released for the first time on Blu-Ray.

Before Skip Woods became an A-List Screenwriter he wrote and directed the indie crime film Thursday. Bad people doing bad things with a timeline that’s all over the place puts this one into the Faux Tarantino universe of the time.

Casey Wells (Thomas Jane) thought he could leave his life behind as a racist, murderous drug dealer.  He was wrong.  Eventually, your past catches up with you.  That past in the form of Nick (Aaron Eckhart) and his gang (played by James LeGros and Paulina Porizkova) have found him and to what end? If Nick is to be believed it’s to say goodbye before he’s married and gone from the US.  All is not what it appears as Nick leaves a briefcase full of heroin in unsuspecting Casey’s care.  Now everyone from Rasta-Hitmen, Nick’s Crew, and dirty cops come out the woodwork.  Trying to not only find the drugs but $2 million in cash Nick has fled with.

Jane and Eckhart are solid as the former murderous partners in crime.  The jokes about them looking alike will be all the more crystalized if one sees this film.  The best performance is by Porizkova playing the psychotic and sexually charged Dallas.  Her moments with Jane are actually terrifying with Porizkova allowed to go not over the top but just the right amount of arched.

The biggest issue with Thursday is that it suffers from the late-90s Crime Film troupe of White Dudes dropping racial slurs (specifically the N-Word).  It’s not dropped once but multiple times over multiple scenes.  This stops the film dead in its tracks.  There isn’t a justified reason for these to be in the film.  Maybe it’s to show how terrible these people are but there’s a moment that sums that up pretty quick with the murdering of a pregnant woman.  Though depiction does not necessarily mean endorsement.  It is hard to get past this stuff.

Thursday’s amoral to its very core, a film about bad people doing bad things.  It’s a true Neo-Noir with bad people doing bad things.  The Tarantino inspired crime film does take some of the more despicable aspects of Tarantino’s early films (specifically Reservoir Dogs and Pulp Fiction).  A few wrong missteps that will have our current cinema landscape rejecting this film wholeheartedly.  Those that can look beyond the missteps will find Thursday is an interesting relic of its era.

The Shot on 35mm and 16mm film has made the transition to Blu-Ray perfectly.  The Kino Lorber produced transfer retains all the beauty of each film formats the production was shot on.  The transfer has a nicely balanced grain structure, contrast levels, and sharpness.

The newly recorded commentary by Australian Critic Sally Christie is an informative and entertaining track.  Details include the careers of Skip Woods, Aaron Eckhart, Thomas Jane, Paul Marshall, Glenn Plummer, the indie film rise and the film landscape that Thursday was made in, Pulp Fiction’s influence on not only this film but the films of the time, the hitman character cliché/stereotype/archetype, Tarantino’s influence as a whole on this era, the costume design by Mark Bridges and his work in the 90s and this film, the career of Michael Jeter and his appearance here, the film’s connection to Araki’s The Doom Generation, the acting and modeling career of Paulina Porizkova (including her amazing TED TALK), the use of racial slurs (something that Thursday was not the only film to do liberally), the discussion of male-rape in pop culture (the scene where it’s a female raping a male), the career of James LeGros, the career of Mickey Rourke, the creation and running Propaganda Films (they produced and distributed Thursday), and much more.  Christie’s commentary is definitely a must-listen for anyone that likes Thursday.

Lying for a Living with Thomas Jane (14:51) – an all-new interview with Thomas Jane on the making of Thursday.  Jane begins by recounting having an audition for The Thin Red Line with Terrence Malick and how long of production that he was offered three roles in the film before Thursday and by luck the fourth time he was offered another role.  In type Jane fashion there are some great stories about a hernia, taking a class with Brando (where the title comes from), his time working with Michael Jeter, and much more. Jane as always is honest and a delight of an interview while discussing the making of this production.  Note: he does a killer Brando impersonation.

Kino Lorber has put together a handsome package for Thursday.

Kino Lorber’s Blu-Ray of Thursday is out January 12th