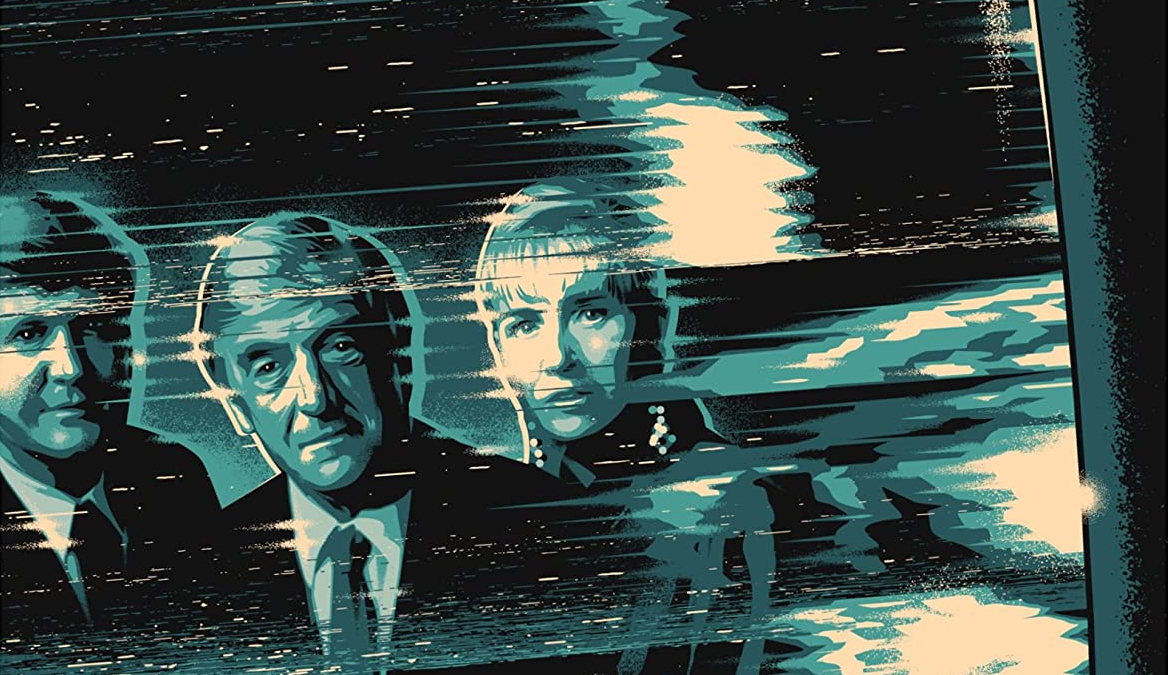 Ghostwatch the infamous BBC One “Shocker” from 1992 is as fresh and as influential as it was thirty years ago.  101 Films have given the film wonderful extras and transfer.

Damn. Some things hit you in the sweet spot.  I love how a single film can recontextualize an entire subgenre for you.

The film began as a bit of theater with the BBC being a bit cheeky on Halloween presenting a special called Ghostwatch to an unsuspecting audience.  Filmed months prior by director Lesley Manning from a script by writer/producer Stephen Volk.   The film is so effective in its terrors and verisimilitude that it caused quite a ruckus in England when it was shown on Halloween in 1992.

Taking it out of that context and on its own terms as a film… it rocks.  Though one will have to consider that James Wan, Blair Witch Project, and the Paranormal Activity franchise have literally sucked the marrow from the conceits and troupes that Ghostwatch was doing for the first time thirty years ago.

Much of the reason that it works so well is the slow burn that writer Volk imbues into the entire enterprise and how director Manning ensures that the reality of the piece is never put into question.  The way that the film cheekily plays with reality and fiction is the key to its entire success.  Casting real-life News Anchors and other personalities that take their roles without a single wink.  Even the children and mother are supremely good – though one can very much see where James Wan took the family dynamics of his Conjuring-verse or Insidious films.

All of this is for naught if it doesn’t work as a horror film.  Magically, Ghostwatch does work effectively so as a horror film with some truly effective scares and moments of unease.  Ghostwatch inadvertently outdoes most of the “found footage” horror films that thirty years later have all of the tech and modernity at their disposal.

101 Films has given Ghostwatch its best foot forward.  Shot on Video back in 1992 could be a disaster in the making.  Luckily enough it was shown in the UK and the PAL standards were very different than the terrible US standards.  Those PAL standards give way to a video image that’s wonderful and not at all the consumer-grade or even commercial-grade Video from the US.  The image is more akin to a Super 8 or 16mm shot.  Though there is definitely ghosting – pun intended – in the image and the affectations of CCDTV cameras at the time in which you’d expect.  All that being said that Ghostwatch looks wonderful considering its source and the fact that it has been essentially out of circulation since its debut.  Bravo to 101 Films for taking on what could only be considered an exhaustive task.

Commentary with film historians Shellie McMurdo and Stella Gaynor begins with their first viewing of the film – which they both watched live back in 1992 – which terrified them both.  Some of the other details include how Ghostwatchwas a sequel (of sorts) to Crimewatch – a real BBC special that was similar to how Ghostwatch was done, how the mistakes that are in the film are kept and translated to the reality of the piece as it being live when it was originally aired, the lack of it being in circulation after its first screening because of the trouble BBC got into, and much more.  McMurdo and Gaynor give us a detailed informative, historical, and personal account of Ghostwatch.

Commentary with writer Stephen Volk, producer Ruth Baumgarten, and director Lesley Manning begins with a last-minute edition requested by BBC.  Some of the details include the challenges faced from the production with using pre-recorded footage on a New Stage that at the time was a set up for Live Footage, the various techniques that they used to make some of the video footage “scarier”, how they had to balance the “codification” between horror films and reality tv, the huge amount of work that they did to create the “pastiche” that felt real when it came to the camera work, music, video graphics, editing, how they could not use BBC facilities, how they cast real life behind the scenes crew that were willing to be actors – and how few from the BBC were willing to do so, how Volk approached writing roles that don’t sound like actors but approaching realism, how they honestly thought the production would not fool anyone – much to their surprise it was quite the opposite, how the project was developed originally as a six-episode series and how that transitioned to what it became, what drew Manning to the project, the themes of young girls being victims of poltergeists and other horror entities, and much more.  Volk, Baumgarten, and Manning provide an essential, highly informative, very technical commentary track.  The discussion is the kind that any future filmmakers would do good by listening to this track as it gives some truly great insight into “found footage” or as I like to call it faux-docs.

Do You Believe in Ghosts? (48:14) – is an all-new making-of documentary filmed for the 30th-anniversary ofGhostwatch and the phenomenon post-broadcast.  The documentary covers the inception, pre-production, production, and release of what was at the time a “Special” on BBC One that turned out to be an elaborate bit of filmed scary theatre and the fallout, and more importantly the relevance and how this affected the horror genre.  Seven years before Blair Witch Project became a thing.  The documentary features everything you could possibly want to know about the making and behind-the-scenes of this ingenious piece of filmmaking.  Part of the wonderful part of the making-of is how much they get into not just how things were achieved but the fallout after the show – it was very reminiscent of Welles’ War of the Worlds Radio Broadcast sixty years prior, and of course how highly influential Ghostwatch was on film and specifically horror.  Featuring interviews from the remaining cast and crew writer Stephen Volk, producer Ruth Baumgarten, director Lesley Manning, “actors” Sarah Greene, Gillian Bevan, filmmakers Robert Savage & Jed Shepherd (who directed & produced – respectively – the similar themed Host [2020]).

Shooting Reality (7:36) – an all-new featurette created by the director of Ghostwatch Lesley Manning.  This brilliant visual essay where Manning discusses – along with visual accompaniment – how she blocks out scripts and creates notes for herself on what was a very complex assignment, the various ephemera created, and lastly some of the letters she got following the broadcast of her film.

Horror Fan. Non-Horror Fan.  Ghostwatch needs to be seen by film fans in general.  101 Films have given the film the best foot forward with great extras and a beautiful transfer.  Highest recommendations!!!

101 Films’ Blu-Ray Edition of Ghostwatch is out December 13th