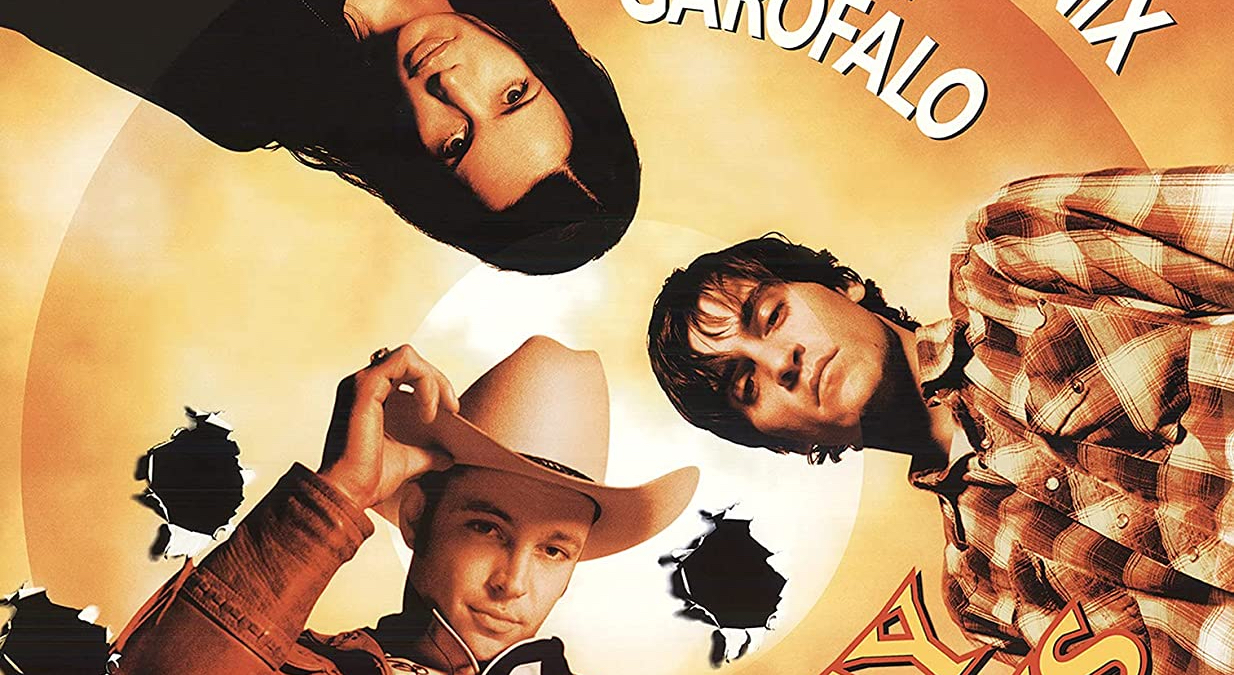 Clay Pigeons the underseen cult classic dark comedy gets a new lease on life thanks to the fine folks at Kino Lorber with this beautiful Blu-Ray release.

There is a certain time frames for film (1997 – 2000) that because I worked as a projectionist I got see about 95% of everything released.  Everything.  Even the terrible.  Yes, I saw Baby Geniuses.  I also saw some truly terrific films.  David Dobkin’s Clay Pigeons was one of those upper tier terrific films.

Clay (Joaquin Phoenix) is your average charming dolt in a small town.  Clay’s life quickly turns as bodies begin to turn up, some his fault, some not.  Making his life difficult, to say the least, is his best friend’s widow Amanda (Georgina Cates) who he’s trying to sever ties with. This coincidentally coincides with the appearance of his new friend Lester Long (Vince Vaughn).  Clay’s life takes a turn for the worst as the FBI (in the form of Janeane Garofalo) thinks the bodies are his victims.  Only Clay and Lester know that it’s Lester’s doing the killing, trying to “help” his buddy out.

The primary reason the film works is the work of both Joaquin Phoenix and Vince Vaughn.  The film is essentially a duel between these two characters and actors.  Phoenix with his more subdued simmering energy.  Vaughn with his manic wild uncontained energy.  The way these two clash first as friends then as adversaries are electric on-screen.  One need only look at the mid-film scene set at the dock at night to understand the kind of greatness that’s within the film.

The script from Matt Healy is exceptional as it feels like a spiritual cousin to Blood Simple but never being Blood Simple or any of the Coen Brother’s output.  Simply because Healy’s script is verbally aerobic and verbose in character in the way that the Coen’s scripts are.  Though the Clay Pigeons is darkly funny there isn’t the sense of the sinister that the Coen’s seem to imbue their films with.

Dobkin’s direction is clean and beautifully economical.  Even though he had come from Music Videos none of the jumpy “stylish” directorial flourishes are present here.  The film is more traditional and classically shot than most of the films during this era.  Clay Pigeons is better off for it.  It remains as fresh and undated as when it was released over two decades ago.

Kino Lorber has been provided a beautiful and sharp transfer.  The transfer shows off the 35mm shot film.  The image is a huge upgrade from the twenty-year-old DVD.

The all-new commentary by director David Dobkin provides a detailed informative track about a film that he obviously loves and adores.  Details include going against the grain with the Music Video director cliché of flashy quick edited features without substance, working with composer John Lurie, the opening moments and finding the Old 97s, film in Utah for Montana, the work and working with Georgina Cates, shooting the film with a single camera, working with Vince Vaughn and working on the three films together, a funny anecdote about the Truck that Joaquin Phoenix drives in the film, the use of music in this film, working with Ridley Scott, the original cast ideas of Bill Paxton, Viggo Mortenson and Laura Dern, some of the directorial techniques he developed on this film, working with Jeanne Garofalo, the details of making sure that actors are secure during sex scenes, and more.  There are moments toward the end of the track where Dobkin goes silent but all in all, this is a great track and worth the cost of the disc.

Theatrical Trailer (7:02) – 3 different trailers and 1 trailer for the soundtrack.  These trailers are also of varying quality like the TV Spots.

Clay Pigeons is the kind of underrated cult classic that Kino Lorber has quickly become the champion of.  HIGHEST POSSIBLE RECOMMENDATIONS