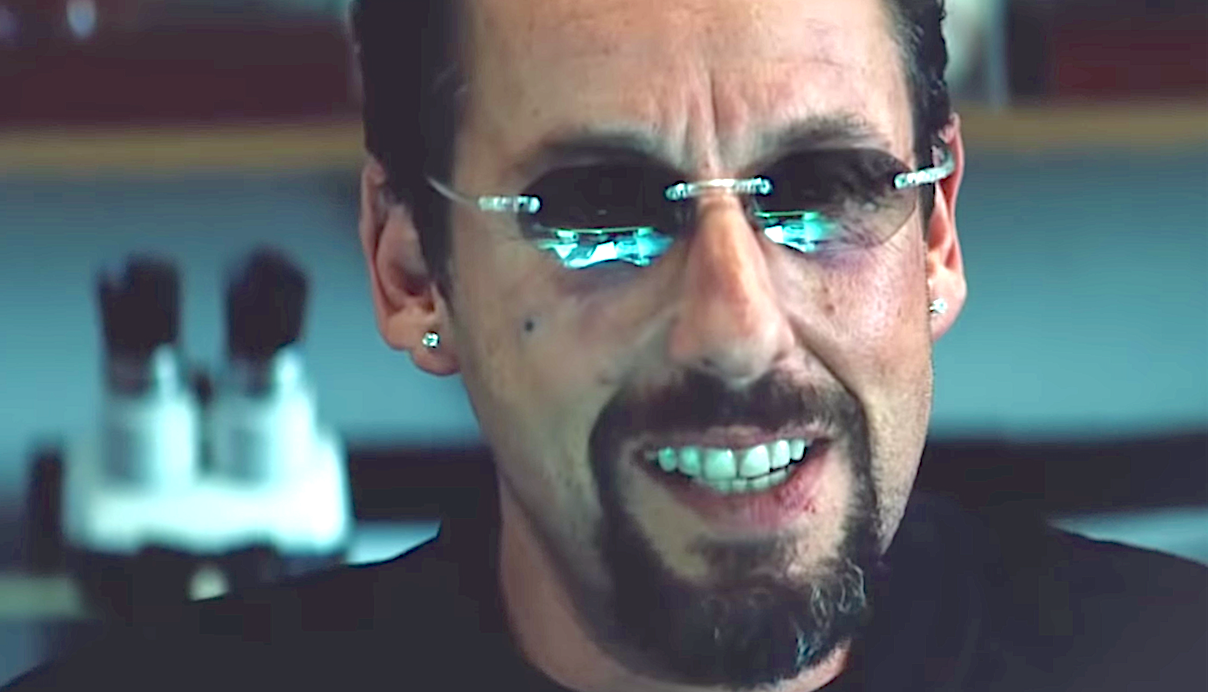 The Safdie Brothers with the help, of all people, Adam Sandler take their filmmaking style to the next level with Uncut Gems.

Nothing can prepare you for the type of film Uncut Gems is.  Beginning in the wilds of conflict diamond country in Africa and ending in the microcosm universe of an rare gemstone Writers/Directors Josh and Bennie Safdie bend the ticking clock narrative format to the breaking point.  The results are a film that is nerve-racking, emotional, thrilling, ugly, beautiful, and propulsive in equal measure. Sometimes all of it at once.  In all of this thunderous filmmaking stands Adam Sandler. Leaving behind the goofy man-child persona, at least for a minute, to give us a performance the likes of Ben Gazzara and John Casavettes would be proud of.

Compulsive Gambler Howard Ratner (Adam Sandler) is a Jeweler with a “can’t lose” situation involving a Black Opal and a seven-figure payday.  That is if Howard doesn’t screw it up.  Gambling isn’t Howard’s only vice but it’s the main source of umbrage, to say the least, in every aspect of his life.  Owing money all over town, specifically to Arno (Eric Bogosian), soon to be separated from his wife Dinah (Idina Menzel), trying to make a big payday with Kevin Garrett during the 2012 Eastern Championship Finals, and a mistress in Julia (Julia Fox) that may or may not be trustworthy.  All are parts of his addiction to the thrill of the bet.  Willing to throw it all away on the glory of the win … Can Howard hold it together for seventy-two hours and cash in on the score of his life, or go for broke on an even bigger score.

Uncut Gems brings the Safdie brothers from burgeoning talented filmmakers to full-on cinematic wunderkinds of the highest order. Few, if any films have tackled the addiction to gambling in the nervy way that the Safdie brother’s film does so well.  In their hands, it isn’t just another vice to look down upon or to be saved from.  Much like Danny Boyle’s Trainspotting and the Safdie’s have an innate ability to not only empathize (not and I repeat not, sympathize) with Howard’s gambling, they cleverly showed us the attraction.

By building tension in the most mundane of situations, the Safdie’s show how Howard’s addicted begins to swing everything out of control.  The script written by the Safdie’s and frequent collaborator Ronald Bronstein is born out of a true understanding of the slide into being unable to “unfuck yourself” from a dire situation, only to compound it with more.  The simplest of scenes play out with the sort of intense dread of a horror film or a slow-motion car crash one is unable to stop.  No one knows when Howard will pull the pin from the grenade and let all hell break loose.

If Uncut Gems will be a totem for anything, it will be that Adam Sandler was capable of truly great and special performances.  Untethered by any of the signals that earmark a Happy Madison Production, Sandler is unbelievably good as Howard.  Sandler’s biggest strength is how good he plays off of the entire supporting cast, and often times making everyone’s performance that much better.  Whether it’s the tenderness he brings to the moments with Fox, or the frustration seething through him when facing off against Lakeith Stanfield, or working off non-actors like The Weekend or Kevin Garnett there Sandler proves that he is not just up to the challenge but does so with the kind of style reversed for names like DeNiro and DiCaprio.

The amazing work does not just begin and end with Sandler.  The supporting cast is one of the most varied and best of the year.  The ensemble work is revelatory.  Bogosian, Menzel, Judd Hirsch, Stanfield all do great work but it’s Julia Fox as Julia that steals the show.  What could have been a cliché role, and in some respects is, in Fox’s hands is anything but typical.  Fox shows a maturity and understanding of who Julia is that gives the role an uncommon depth.  There is a moment in the third act between Sandler and Fox that the actress just doesn’t deliver but helps sells the moment so fully that the earned third act payoffs are because of her.

The biggest take away from Uncut Gems is that the Safdie brothers have only begun to scratch the surface of what they are capable of.  I for one will be along for every anxiety-provoking venture these two bring to the screen.