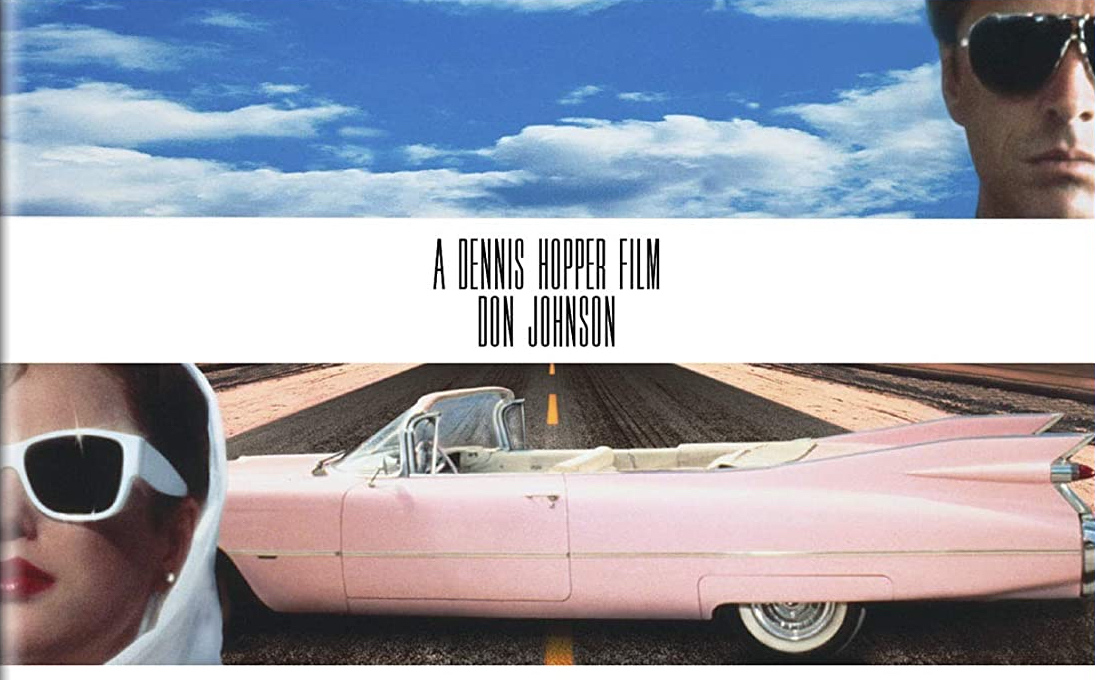 Buildings aren’t the only thing burning in the sweltering heat of Dennis Hopper’s Neo-Noir The Hot Spot.  Kino Lorber gives us an edition to allow reassessment of this forgotten film.

Drifter Harry Maddox (Johnson) comes to Lander’s Texas and quickly sets himself up as a car salesman.  It is only a matter of time until he’s involved with not one but two very different women.  Gloria (Connelly) is a sweet innocent 19-year-old who works at the Car Dealership with Harry.  Dolly (Madsen) is the wife of Car Dealership owner George Hershaw (Jerry Hardin) looking for some heat and excitement. Harry quickly involves himself with both women.  Blackmail, arson, murder, extra-marital affairs, strip clubs all play a part in the undoing of Harry Maddox.

Hopper’s slow-burn approach is the perfect pitch to play out this Texas Heat Stricken Noir.  The 130-minute run time allows things to play out the way that things would in the middle of a Texas summer.  Simmering is something that few people excel at and here Hopper proves to more than adept at this sort of storytelling.

Cinematographer Ueli Steiger’s understated but visually lush photography is the film’s secret weapon.  Heat is one of the hardest things to portray on screen without cliché.  Here Steiger and Hopper find a visual language with the camera and visuals to perfectly capture the stifling heat that permeates every frame.  One does not seem surprised that everyone is gleaming with sweat and that at any moment a fire could erupt in a lowly building.

The film’s secret weapon is the chemistry between Don Johnson and the two female leads Jennifer Connelly, and Virginia Madsen.  It is hard enough for one pair of actors to generate heat but to have essentially a triangle and they work perfectly is almost unheard of.  Johnson and Connelly’s chemistry is very different than Johnson and Madsen’s chemistry which one could take for granted but never should.  The way sexual tension works in both relationships informs the movie and even motivates it in a way that puts it on the elevated level of sexual thrillers.

Like many of Dennis Hopper’s later work (especially Out of the Blue), The Hot Spot is an under-appreciated gem just waiting to be rediscovered by cineastes en mass.

The Brand New 2K Master – Color Graded and Approved by Cinematographer Ueli Steiger is beautiful. The image is handsome and sharp with retaining that filmic look of the early ’90s 35mm. KL has made sure that this one has its best foot forward and is a definite upgrade to the prior release by Shout Factory (which was a double feature).

Kino Lorber must be commended for their very active mix of the film.  The Hot Spot has one of the most active low-end tracks of recent memory.  The Jack Nitzsche’s score and its aggressive use of the subwoofer is reproduced here too much of this reviewers’ glee.

The brand-new commentary by writer Bryan Reesman is an informative track.  Those that have listened to Reesman’s tracks on The Secret of My Success and Buried Alive will be ready for the rapid-fire delivery of detailed anecdotes and production information about the film.  Details include the rise and history of Film Noir, the Hayes Codes (aka the Production Code) and the standards it imposed it to films, how the Hayes Codes as it related the Film Noir, the history of the location (Taylor, Texas) and the productions that it hosted, Roger Ebert’s profile of Hopper at the time of the production, the work of novelist of The Hot Spot (called Hell Hath No Fury) Charles Williams, the adaptation by Williams and Nona Tyson, the differences in the novel and film, Jennifer Connelly and her career at the time, the Reesman’s experience with his viewing of Phenomenon, a 4-hour cut of the film, the career (both acting and directing) of Dennis Hopper and how he came to The Hot Spot, the work of Ueli Steiger and his specific look he created, the sex scenes in the film, the amazing score by Jack Nitzsche, Nitzche’s gathering of legendary musicians for the score, the work and career of Don Johnson, the work and career of William Sadler, the directorial style in Dennis Hopper’s filmography, and much more.  Reesman is able to bring the same sort of deeply researched and entertaining track that he is known for.

Trouble in a Texas Town (7:03) – is an all-new Interview with Star Virginia Madsen.  Beginning with discussion of how miserable the production was because of the Texas heat and a funny anecdote about Dennis Hopper directing.  Details include her being cast, how Hopper directed and wrote the film and it informed her performance, her critique of the performance in the film, and much more.  Madsen is a great informative and honest interview.

Frank Sutton’s Last Dance (6:25) – is an all-new Interview with Actor William Sadler.  Beginning with a unique audition process at Hopper’s amazing Venice Beach California house (if you haven’t heard about it look it up, truly architectural marvel).  Details include how Sadler approached his portrayal, just how early in his career the film was, Hopper’s initial conception of how he would shoot the film, and more.