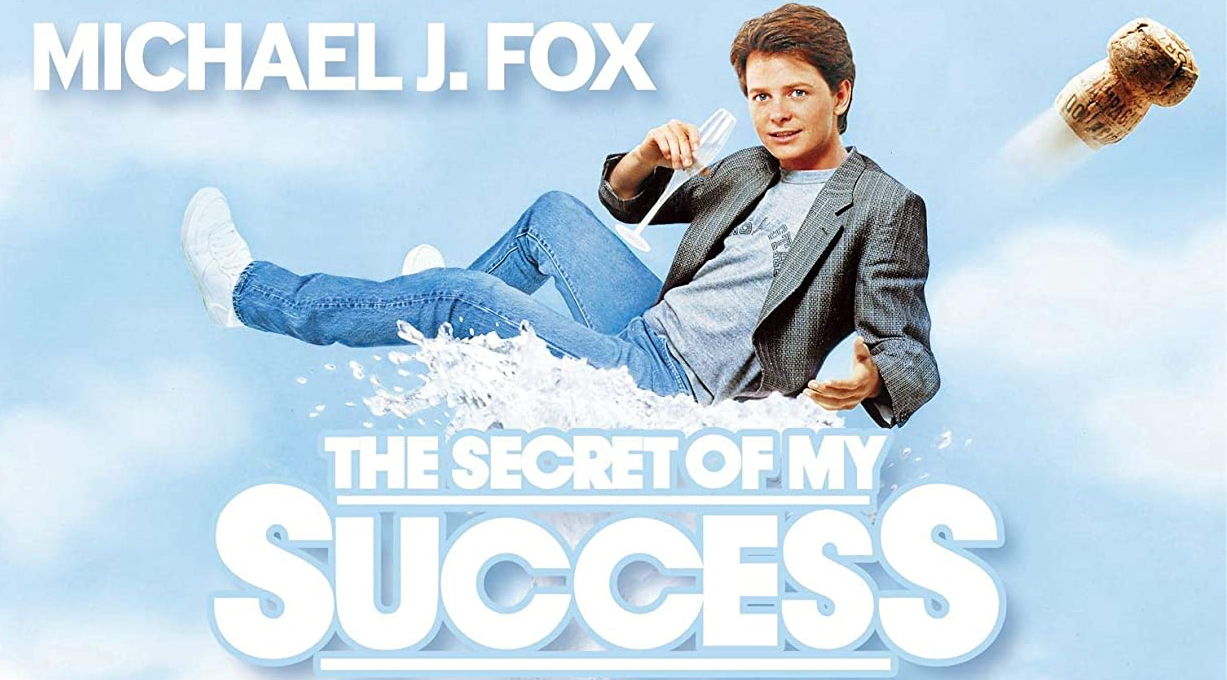 Herb Ross’s Yuppie Corporate Comedy The Secret of My Success makes its debut on Blu-Ray from Kino Lorber’s KL Studio Classics.  The disc has a solid transfer and great extras.

Yes, I know.  It’s a yuppie comedy.  Greed is good.  The 1980s.  Reganaughts and what not.  That being said The Secret of My Success is a winning, entertaining proto-Screwball Comedy anchored by the genius that is Michael J Fox and a game cast.

The very waspy named Brantley Foster (Fox) goes to New York City determined to take the city by storm and be what Tommy Wolfe affectionally called “The Masters of the Universe”.  Brantley is genuinely a good guy so don’t hold his Gordon Gekko ideals against him.  As he begins his first day he’s let go because of cut-back.  He ends up at a job in the mailroom thanks to his Uncle (the always reliable Richard Jordan).  Through a series of coincidences, Brantley takes the nom de plume (and even more waspy name) Carlton Whitfield and a corner office that isn’t his.  Working both jobs Brantley is making moves and shaking up the company so much his alter ego has been brought to the attention of his Uncle.  Never mind the fact he’s sleeping with his Aunt Vera (Margret Whitton) and in love with his Yuppie Co-worker and mistress of his Uncle Christy Willis (Helen Slater).  If it’s all confusing, it’s because it is and all of it gets even whackier as they all converge on a weekend in the Hamptons hosted for the Executives of the Company.

The Secret of My Success is successful because of its cast.  Headlined by Michael J Fox in full-on charming comedic star, much of the reason we like Fox is on display here.  Brantley is infinitely likable because of his motivation to be more than just a mailroom clerk.  We love seeing Fox strive for more.  Here is no different but with one exception.  The supporting cast around Fox is one of the best he’s ever had.

Beginning with Richard Jordan in fully Gordon Gekko mode is great.  But its Margret Whitton as Aunt Vera that steals the show, taking the stereotyped role of the ignored housewife and giving it a modern sexually forward angle that Whitton devours with her comedic genius.  Helen Slater though not given a lot to work with, the script shortchanges her, makes a character a lot more complicated than the standard 80s romantic lead.  John Pankow shows up to do the John Pankow thing, which is too be the coolest cat in the room.

Director Ross working from a script by Jim Cash, Jack Epps, and AJ Carothers has more in common with the Screwball comedies of the 30s than it does with something like Oliver Stone’s Wall Street. The economics and business aspects of the film are very simplistic and bent toward the film’s plots rather than the other way around.  What it does excel at is the comedic parts of the film.  Though strangely the film’s got a preoccupation with Fox stripping down and being caught in his Calvin’s at least half a dozen times.

The Secret of My Success is still funny and entertaining thirty plus years on.

Kino Lorber’s Blu-Ray disc features a handsome transfer that though isn’t a restoration is nonetheless a winning image.

The newly recorded commentary by Bryan Reesman is winning track from the Journalist.  Literally no stone is left unturned by Reesman.  He discusses everything from the production, to the various cast members, Director Herb Ross’s career, the soundtrack and the various needle drops and the history behind them, Fox’s career, the visual look of the film, the comedy, the nostalgia of the era and how it informed on the film, and much more.  I really appreciated that Reesman was constantly giving information about the production and the various people that worked on it.

Sharing Secrets with Helen Slater (10:14) – is an all-new interview with Slater.  Kino does forewarn that the quality of the video as it appears to be done via video chat.  Though it does not distract from Slater’s discussion of the film.  Slater is a delight and informative.  Anecdotes include being self-conscious about her height (because she was taller than Fox), Herb Ross as a director, her inspiration for the character, the cult of Fox’s Fandom, rehearsal, and much more.

The Secret of My Success’s success is in Michael J Fox in full-on charming mode.  Kino Lorber’s disc is a Recommend.