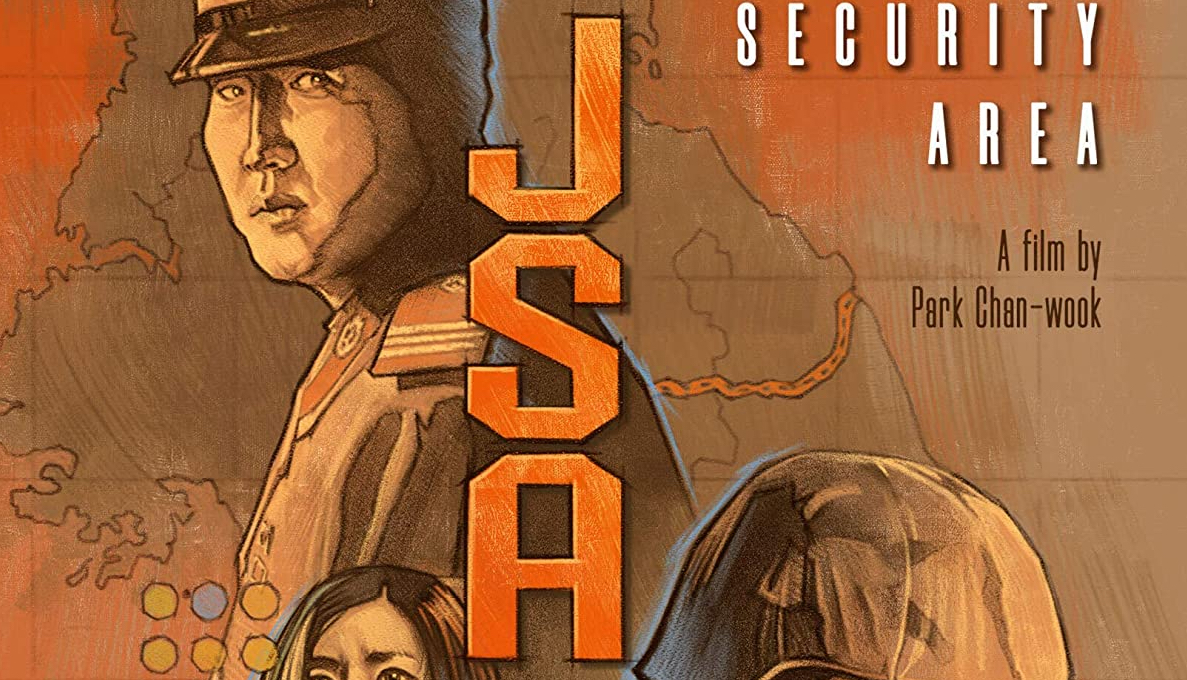 After too long out of print in the US, Park Chan-Wook’s JSA (Joint Security Area) comes roaring back to home video.  The Arrow Video Blu-Ray is armed with beautiful transfer and plenty of extras.

With star turns by Lee Young-ae, Song Kang-ho and Lee Byung-hun JSA may at first glance not be like any of Park’s other features.  Slowly the tense military thriller tightens the reigns turning from thriller to tragedy.

The DMZ is what separates North from South Korea.  Armed guards and military installations line this invisible line.  During one late night, there is an incident on the North Korean side that costs two of the Northern Soldiers’ deaths.  To attempt to quell what could turn into a full-out work an investigation is conducted by the Swiss Military let by Major Sophie Jean (Lee Young-ae) is brought in.  Major Jean finds a confounding mystery at the center of this incident.  One that Sergeant Lee (Lee Byung-hun), Private Nam (Kim Tae-woo), and Sergeant Oh (Song Kang-ho) do not want to tell anyone.  As Jean begins her investigation, we find the real story behind Lee, Nam, Oh, and Private Jung Woo-jin (Shin Ha-Kyun).

Park Chan-wook’s filmography is one filled with the cost of violence and the tragedy of it.  In that regard JSA matches up perfectly to his filmography.  Though there were other films Park had directed prior to JSA this feels like his first fully formed one.  Do not let the commercial qualities fool you.  This military thriller is as much a military thriller as Oldboy is a revenge film.

Based on a Novel by Park Sang-yeon the adaptation takes a novelistic approach with dueling narratives; one told in the past, one told in the present.  This allows the audience to know what the outcome is but not the details of how it occurred.  Park and his screenwriters focus on the budding friendships between the four men and the tensions the political ideals they were raised with cause.  By undercutting the more exploitative aspects of the story we are left with a drama with a well-spring of emotion.

When the violence does occur, it makes no mistake Park does not hold back, it is horrific and unsettling.  As it should be.  Many of fan of Korean cinema often take the brutal violence on display as “cool”.  JSA and Park make sure that none of this is “cool” or “badass” but rather upsetting and terrifying.  That is the key to JSA’s power.  A power that has not faltered in the twenty years since its initial release.

The High-Definition transfer included here is beautiful.  Arrow Video’s transfer is sharp, with solid contrast levels, and a healthy grain structure.  Having seen the film in theaters and on home video (in other iterations) this Blu-Ray is as impressive looking as JSA has ever looked.

The newly recorded commentary by Critic Simon Ward.  The critic delivers an insightful commentary track for Park’s Third Feature Film.  Details include director Park’s career and how JSA varies from his filmography, its ties to A Good Few Men, the careers of Lee Young-ae, Song Kang-ho, and Lee Byung-hun and their relationships and ties to director Park’s filmography, the directorial style and how Park handles the flashback and multiple points of views in the film, Park’s Vengeance Trilogy and how it cast a long shadow over his career, the politics of the film, Quentin Tarantino’s love of this film and Park’s filmography as a whole, the change in Park’s preference of acting styles through the years, and much more.  It’s a solid informative track for novices and experts in South Korean cinema.

Stepping Over Boundaries (35:14) – Critic Jasper Sharp discusses the career of Park Chan-Wook and where JSA lines up in his filmography.  Sharp is great with discussing not only the work of Park but the work of the other directors from South Korea that came up during the boom in their Korean Cinema.  The critic discusses very interestingly the Homoerotic notations of JSA, the structure, the visuals, a divergence into the film Shiri and its relevance to JSA (this review quite liked the film from the late 90s but has been some time since seeing it), other films that dealt with South and North Korean conflict; Silmido, Taegukgi, Welcome to Domogal, Operation Chromite, and much more.  The featurette is both an interview and visual essay of sorts as there are scenes, photos, posters and other visual pieces are shown throughout to give emphasis of Sharp’s commentary on Park and his film.

JSA is welcomed back to Home Video with a wealth of extras and a beautiful transfer.  HIGHEST POSSIBLE RECOMMENDATIONS!!!

Arrow Video’s Blu-Ray for JSA is out now.