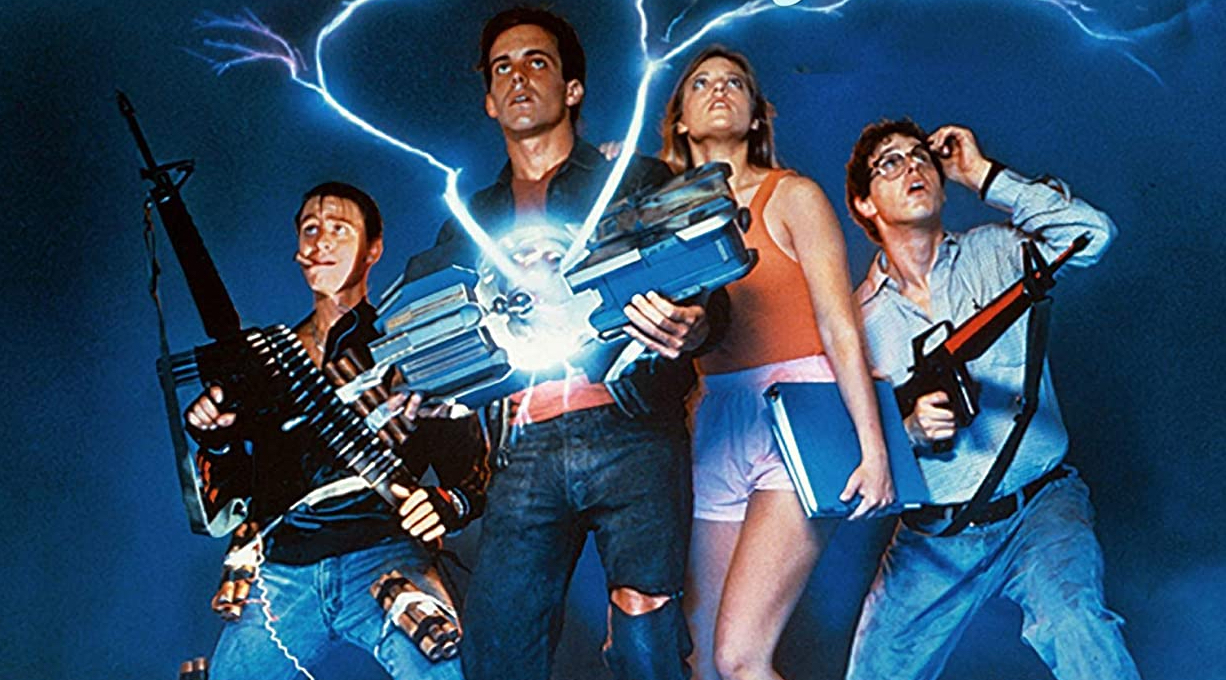 The beloved true cult classic My Science Project comes to Blu-Ray with extras from Kino Lorber.

It is both shocking and sad that My Science Project never became the hit it should have been.  When you realize that it was released in 1985 and at the time the following films were in release;

Back to the Future

The Legend of Billie Jean

That’s a murder’s row of popular 80’s films about teenagers.  So, it’s shocking, but sad that My Science Project never got a foothold beyond its devoted fanbase who mostly found it on steady rotation on HBO and on VHS.  For those that did find the film… like Flight of the Navigator has become a cult hit.

Mike (John Stockwell) is a gearhead that cares more about his Goat (GTO for you uninitiated) than he does about everything else.  That includes school, grades, and his girlfriend.  If he doesn’t produce something good for his science project his science teacher (Dennis Hopper in an amazing supporting turn) is going to fail him.  Mike manages to corral Ellie (Danielle von Zerneck) the Editor of the School paper to help him with his project.  This help comes in the form of going to the local military plane graveyard.  They find what appears to be an alien artifact.   They along with their Teacher and a few friends (Fisher Stevens and Raphael Sbarge both in scene stealing mode here) manage to unleash a power that literally transcends time, space and even reality.  Can the teenagers figure out a way to stop the machine from turning the entire world into an alternate plane where there are no limits.

Part of the fun of the film is the adroit choices it makes throughout the film.  Casting Dennis Hopper as an ex-revolutionary now science teacher that huffs laughing gas (note this was an entire year before Blue Velvet was made) is a delight.  Casting Fisher Stevens as Vince the amped up sidekick who is as much of a nuisance but a lot funnier than say Willie Ames.  The romance between Mike and Ellie that has them both changing a bit during the course of the film.

Writer/Director Jonathan Betuel creates a film that in part rejects much of the conventions set forth by John Hughes films and Amblin.  Though most of those formulas were being created at the time, it is still a blast seeing what we’ve come to know as the troupes not being used.  Stereotypes like “the nerd” is not played out the way one would expect.  The action set pieces are crisp, inventive, and hit the cusp of the PG-13 rating they got.

My Science Project makes the perfect companion piece to another Betuel scripted feature The Last Starfighter.   Its teenage heroes are taken with the same sort of seriousness and respect that Starfighter and most of the best films of the era did.

The transfer provided to Kino Lorber seems to be the same one that the OPP Mill Creek disc used.  Though this disc has a healthier bit rate leading to a cleaner and crisper image.  There isn’t a sign of digital artifacting that the older disc had plenty of.  One would have loved an newer transfer but considering this may be the last time we may get the film in any format the work that Kino has done here is amazing.

The newly recorded commentary by Kat Ellinger and Mike McPadden is a great discussion about the film.  Beginning with the 1950s nostalgia in the 1980s, how that 50s nostalgia led to films like My Science Project and other Sci-Fi infused Teen Movies, Spielberg and Amblin Films, Dennis Hopper in the film and his career resurgence at the time in the Mid-80s, how Disney created Touchstone and its history, the cast that includes Fisher Stevens, Debra von Zerneck, Raphael Sbarge, and John Stockwell, writer/director Jonathan R Betuel and the production of the film, the “kids discovery something weird” genre (aka Goonies, Gremlins, The Explorers, Back to the Future), the Summer of 1985, the box office failure, its rise to cult status through Cable TV and VHS, the lack of this type of film in the current culture, the rise of PG-13, the rise of VHS and accessibility of Cult Films, the self-aware nature of the film, the budget and production schedule, how Betuel was able to pull off the production though being it’s his first directed film, FX Guru Rick Baker’s additional contribution, the third act cameos from genre character actors, the ties to Bill and Ted Excellent Adventure, the making of the dinosaur and the setpiece around it, and more.  Ellinger and McPadden do a great job of not just dispensing information about the production but the personal ties to the film they have.  Excellent commentary and well worth a listen.

The Flip Side of Reality: An Interview with Fisher Stevens (6:50) – the actor (and now filmmaker) recounts his experience audition and getting the role of Vinny.  Stevens discusses the director, his work in the production, the smart script, working with Dennis Hopper, Hopper’s sobriety, working with John Stockwell (a great bit about Stockwell audition for a very famous film), his friend and co-star Raphael Sbarge, and more.  It’s a great enthusiastic interview.