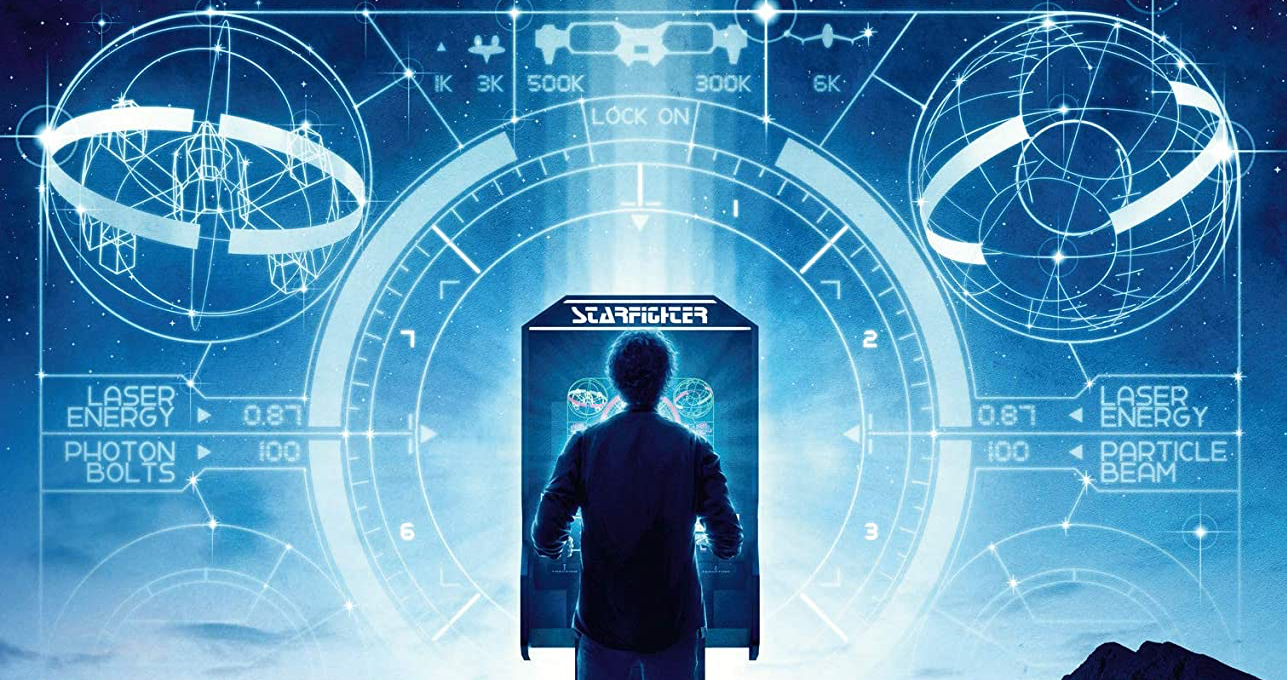 The Last Starfighter gets a definitive release with Arrow Video’s newest Blu-Ray release with a new 4K Scan and a host of extras.

So, my parents got separated during the Summer of 1986.  My sister and I stayed with my mother.  My father left the house.  My father took with him our massive VHS and Betamax collection.  Literally, he took every VHS that I would watch; Star Wars, Empire Strikes Back, Return of the Jedi, Bladerunner, Star Trek: The Motion Picture, Star Trek II, Ghostbusters, 48 HRS, Condorman, Escape from New York… One of the few VHS tapes that were left was The Last Starfighter.

That summer I watched The Last Starfighter at least 100 times.  It was comfort food.  Not in the way it was easily digestible, it was though, but in the way that it took me away.  The film comforted me in a time where my world was rocked by things adult told me were fine and I definitely knew they weren’t.  Alex Rogan’s (Lance Guest) want to escape his provincial life even at eight years old I understood completely.

After watching The Last Starfighter what kid didn’t wish with all they’re being that someone like Centuri (Robert Preston) would say they were “the chosen” one and you away to save the galaxy?  It’s a potent concept and for kids in the 80s who were oftentimes handling divorce or worse… this was type of film that we ate up.  It is also why nostalgia can be a powerful thing.  It isn’t the movie/comic/cartoon itself, it’s the memories attach to said piece of pop culture.

The brand-new restoration from a 4K scan of the original 35mm camera negative is gorgeous.  The older Universal Disc is okay but suffers from what most Universal Catalog Blu-Rays suffer from; DNR.  Arrow Video’s Blu-Ray looks like a beautiful archival print, with a healthy sheen of grain.  The transfer hasn’t had the life choked out of it.  The work here makes the CGI effects look less brittle as they had in the prior Blu-Ray edition.  The color reproduction and sharpness here make the disc pop in the way the film has not on home video.

The archival audio commentary by Nick Castle and Ron Cobb is still a great commentary more than 20 years later.  Castle and Cobb are old friends and have an easy chemistry that makes the commentary a entertaining listen.  They recount the production, creating the CGI, Cobb’s work as production designer and how that translated to the FX work, the nuts and bolts of how early era CGI worked, and personal recollections.  The track does sometimes suffer from the describing the action on screen and there is a decent amount of silence.  By far and large the track is well worth your time especially for Cobb, who is no longer with us, as he’s one of the pillars of Sci-Fi production design of the biggest projects of the 70s and 80s.

The new audio commentary by Mike White of the Projection Booth Podcast is a great listen.  Unlike the Cobb and Castle commentary there is not of empty space here.  White discusses everything from the production, the actors, the behind the scene crew, the FX work, the era this was produced and how it affected the film, the massive undertaking (2 years in fact) of the Computer FX, the careers of Robert Preston, Lance Guest, Catherine Mary Stewart, and Dan Herlihy, Comparisons to Ready Player One (and Ernest Cline’s follow up Armada), at the time critical reviews, hilarious adaptation that include a Marvel Comic, a Read-along Cassette, the Novelization (from the King of movie adaptations Alan Dean Foster of course), the lack of a video game and the history behind that, contextual history of the release at the time and the pop culture landscape at the time, the reason why sequel/reboot won’t happen, and much more.  White gives us a great commentary with an overflowing wealth of information and context for this film.

The other new commentary by Lance Guest and his son Jackson Guest is an entertaining one.  The father and son recount Guest experience on the film.  They discuss modern pop culture references (Community, Star Wars, Ready Player One, etc.), Lance being able to see the film in IMAX, working with Robert Preston, Nick Castle, his father who was a Pilot, and much more.  There is a great back and forth between father and son on this very entertaining and informative track.  Though like the Castle/Cobb commentary there are a few silent sections.

Maggie’s Memories (9:28) – an all-new interview with actor Catherine Mary Stewart.  Beginning with her experience audition the film, Stewart is a lovely interview.  She recounts the production, her time with Guest, the popularity of the film, the gaming culture at the time, the use of CGI and traditional effects, the fun working with Guest as two different characters, the first screening, and more.  It should be noted the interview was filmed during COVID and done so via Zoom and the quality of Stewarts side is as such.

Into the Starscape (12:20) – is a new interview with composer Craig Safan. Safan discusses how he opted for a traditional full-orchestrial score rather than the electronic based that he had done prior, working on the score during the entire production rather than post, his approach to composing with one major theme rather than multiple themes, the various instruments he used, and more.  It should be noted the interview was filmed during COVID and done so via Zoom and the quality of Safan side is as such.

Incredible Odds (9:27) – is a new interview with screenwriter Jonathan Betuel.  The screenwriter discusses how he came up with the idea of The Last Star Fighter, how he wrote the script in four days, working on the script itself, how quickly the script sold, working with Nick Castle, what the continuation of the series would have been, and more.  The interview is more of a micro-commentary with sections of the film played over Betuel’s voice.

Interstellar Hit-Beast (10:14) – is a new interview with special effects supervisor Kevin Pike. Pike gives us a micro-commentary for his work, discussing it while select scenes play and behind the scenes b-roll footage, and stills.  Pike really goes over the practical work, not just the make-up, he and his crew had to do for the film.  Things like the lights on the sets, the monitors display information, creating the actual gun turret and pilot seat for the Starfighter, and much more.  It’s a great featurette/micro-commentary.

Excalibur Test (7:46) – is a new interview with sci-fi author Greg Bear on Digital Productions, the company responsible for the CGI in The Last Starfighter. Bear gives us a micro-commentary for the work he was covering during the making-of the film, discussing it while select scenes play and behind the scenes b-roll footage, and stills.  Bear goes over the coverage that he did as a journalist including the bringing Ray Bradbury in, previous productions that used CGI; Tron, Brainscan, the production offices of Digital Productions, the FX work, the Cray Super Computers they used, and more.

Greetings Starfighter! (7:24) – is an interview with arcade game collector Estil Vance on reconstructing the Starfighter game.  Vance discusses his building of both the game case and actual game Star Fighter.  Working in his spare time, he is a Physician by day, he created everything from scratch with the help of the internet.  You actually see his handiwork, which is quite impressive, during the video intercut with scenes of the videogame in the film.

Heroes of the Screen (24:19) – is an archival featurette on the making of the film.  Using b-roll behind-the-scenes footage, stills, and new interviews with Lance Guest, Nick Castle, Catherine Mary Stewart, Screenwriter Jonathan Betuel, and more discuss the entire production of the film including the development, casting, production, FX work, score, the release, and the legacy.

Crossing the Frontier: Making The Last Starfighter (32:02) – this hold over from the DVD special edition of the film is a great throwback old school making-of.  Lance Guest hosts this look into the making of the film and specifically the FX.  This is a great look at the FX footage including some great ILM Test footage of X-Wings.

All galleries can be navigated by clicking the Next Chapter button on your remote.  These unfortunately do not have a “Play All” Option.

The Cast – 26 stills and descriptions.

Starfighter Command – 216 stills, including some of Dan O’Herlihy without make-up, the photos for the cave, behind the scenes still, up close photos of background aliens and a lot more.

The Starcar – 82 stills, Robert Preston and crew behind the scenes, up close on the console and design,  CGI stills, stills of the computers that were rendering the Car when CGI, and more.

Alternate Ending – 44 stills of the alternate ending discussed in all three commentaries.

Anatomy of a Starfighter CGI – 37 stills of the step-by-step process in order to create a CGI scene in the film.

Promotional and Merchandise – 29 stills of clothing with production embles on them, the Action Figure prototypes that never came to be, board games, the eventual Nintendo video game, and from the 15th anniversary celebration.

Arrow Video has done it again.  They’ve taken a beloved Cult Classic, The Last Starfighter, and turned in a massive Special Edition filled with new and archival featurettes, and an amazing new Transfer.  Highest Possible recommendation!!!