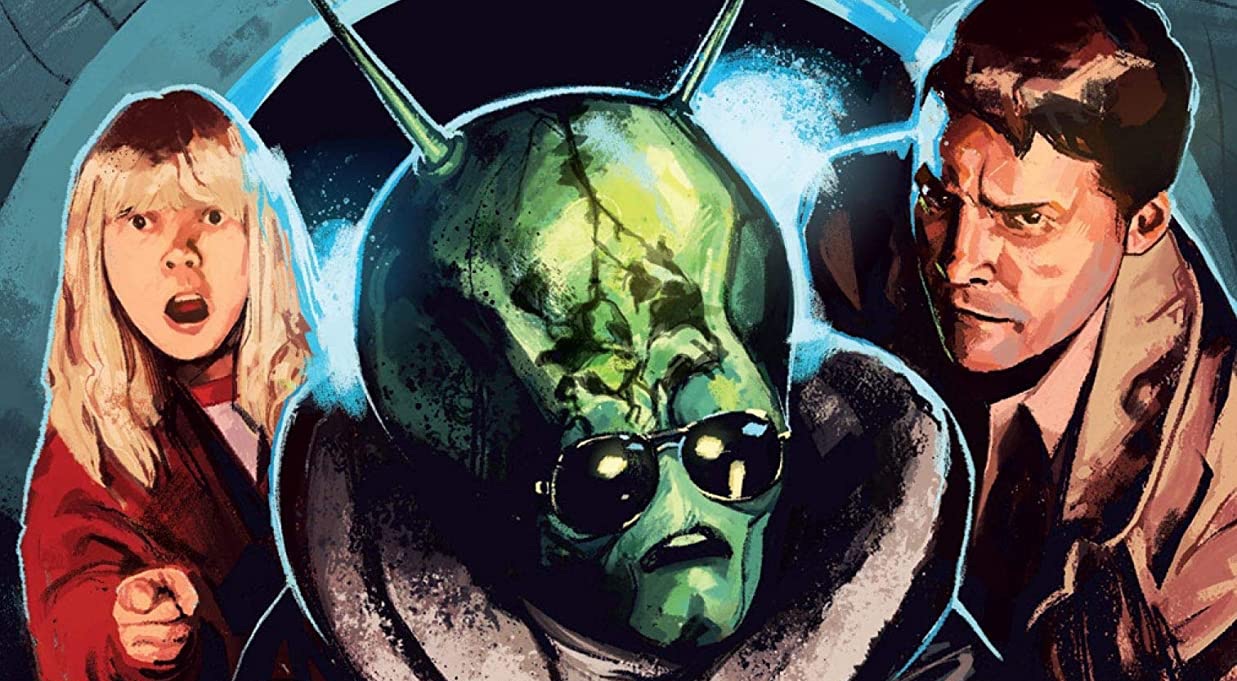 Patrick Read Johnson in another universe is a HUGE director.  The first of his cult family film trilogy (that continues with Baby’s Day Out and concludes with Angus) is a great riff on the alien invasion film.  After watching this still funny film you’ll want to be in that alternate universe where Johnson got a lot more work.

Four Martians hear Orson Welles’ performance of War of the Worlds and mistake it for a real Martian invasion.  Blaznee, Captain Bipto, Pez, Dr. Ziplock, and Giggywig set course for the broadcast’s location… a small town in Illinois, Earth.  They get more than they bargain for when they come in contact with an apathetic human population.  Slowly but surely this small town with its newly minted sheriff (Douglas Barr) and his daughter (Ariana Richards) find out that these Martians are less than capable. Can they help these Martians from themselves as they incur the wrath of the townspeople by destroying the new freeway off-ramp.  Though the real danger to both Martian and Citizens is a killer robot with zero tolerance for jokes or mistakes.  Both of which this group of dimwits is filled to the brim with.

What makes the film work so brilliantly is Johnson’s understanding of these manic, drolly seriously, aliens.  Not making them a joke is part of the fun.  The film treats these guys as though they’re apart of the dirty dozen or some sort of rejected military unit from Mars.  They think of themselves as a real threat.  It’s how the film is able to make that deadpan funny with the way that the humans interact with them where the comedy comes from.

Spaced Invaders thirty years on still works as a hilarious sideways riff on War of the Worlds.  Patrick Read Johnson’s film packs enough laughs to entertain both young and old.

This is definitely an upgrade to the very bad first-generation DVD released by Disney (which wasn’t even anamorphic widescreen). The Blu-Ray upscaling does increase the contrast levels, sharpness, and overall clarity.

Just as fun and entertaining as the film is the newly recorded audio commentary by Johnson, Co-Writer Scott Lawrence Alexander, Co-Editor Seth Gaven, and Second Unit Director Scott Andrew Ressler. The group has a great time, and a lot of laughs discussing the production and film itself.  Anecdotes include Deforest Kelly cast in Dano’s part, the Special Effects work and its connection to The Mandalorian, stolen explosion shots from Spielberg’s Empire of the Sun, the film being an inspiration for Invader Zim, some great rear projection tricks for filming at night with kids (a precursor to the advanced work they’re doing on the aforementioned Mandalorian), and much more.

FAN ONE – is an all-new 17-minute interview with Co-Writer/Director Patrick Read Johnson. The co-writer/director discusses how he became filmmaker through seeing Star Wars three months before the release (which is the basis for is film 5-25-77), moving to California, working at an FX house, and eventually getting into screenwriting at 19-years-old and eventually led to making Spaced Invaders. There’s some great practical talk about how the film was made on a lower budget ($2.2 million), how the film got picked up (a great story), and much more.  There are some great behind-the-scenes photos of the time that are peppered throughout the interview.  Note: the number of times that Johnson saw Star Wars in the first 30-days of release is staggering.

THE SHERIFF OF BIG BEAN – is an all-new 9-minute interview with Star Douglas Barr.  Barr who begins the interview on much work and craft goes into performing in a film with Makeup FX.  The actor dives into how he got the job, the production, working with the legendary Royale Dano, working with the other actors, and more.  Included are some great behind-the-scenes photos are included.

SPIFF AND ME – is an all-new 6-minute interview with Star Ariana Richards.  Richards discusses how she began as a child model and grew into a child actor and was eventually cast in the film.  She recalls some of the memories she had (she made it at 7-year-old) of being cast, director Patrick Read Johnson, and much more.

BLAZNEE SPEAKS! – is an all-new 9-minute interview with Actor Kevin Thompson.  The actor discusses his work as Blaznee (the Jack Nicholson-Martian) in the film.  Thompson discusses his work prior to this (on Return of the Jedi, Critter, Garbage Pail Kids) lead to Spaced Invaders.  The genius of Thompson doing a Nicholson impersonation during the audition is what got him the job and created the character that wasn’t really in the script.  Some of the other fascinating information from Thompson is the practical work and struggles with working in the makeup which was quite difficult.

MODEL KITS FROM MARS – is an all-new 10-minute interview with Visual Effects Supervisor John Knoll.  Beginning with a very entertaining story about how he got to go to ILM (when it was based in Van Nuys) during his father’s business trip.  How this evolved to being hired at ILM and his friendship with Patrick Read Johnson, who was also a model builder. That friendship leads to an offering of his first Visual FX Supervisor gig.  Knoll is great at breaking down the production and how it worked on a lower budget production.  The interview contains some great behind-the-scenes photos and a great look at one of the models from the film.

INVASION OF THE WATERMELON HEADS – is an all-new 9-minute interview with Alien Special Effects Supervisor and Creator John Criswell.  Criswell does a great job in discussing how not only he got the job but the “nuts and bolts” of the challenges of the servos, gears, and remote controls (a funny story about interferences coming from different unexpected places).  There some fascinating information that he gives about effects work and the infancy of Foam Latex and Animatronics what he felt was his failings.  Included are some good behind-the-scene photos.

Rounding out the special features is the film’s Theatrical Trailer, trailers for My Science Project (hopefully a packed special edition coming soon from Kino), The Puppet Masters, and Deep Rising.