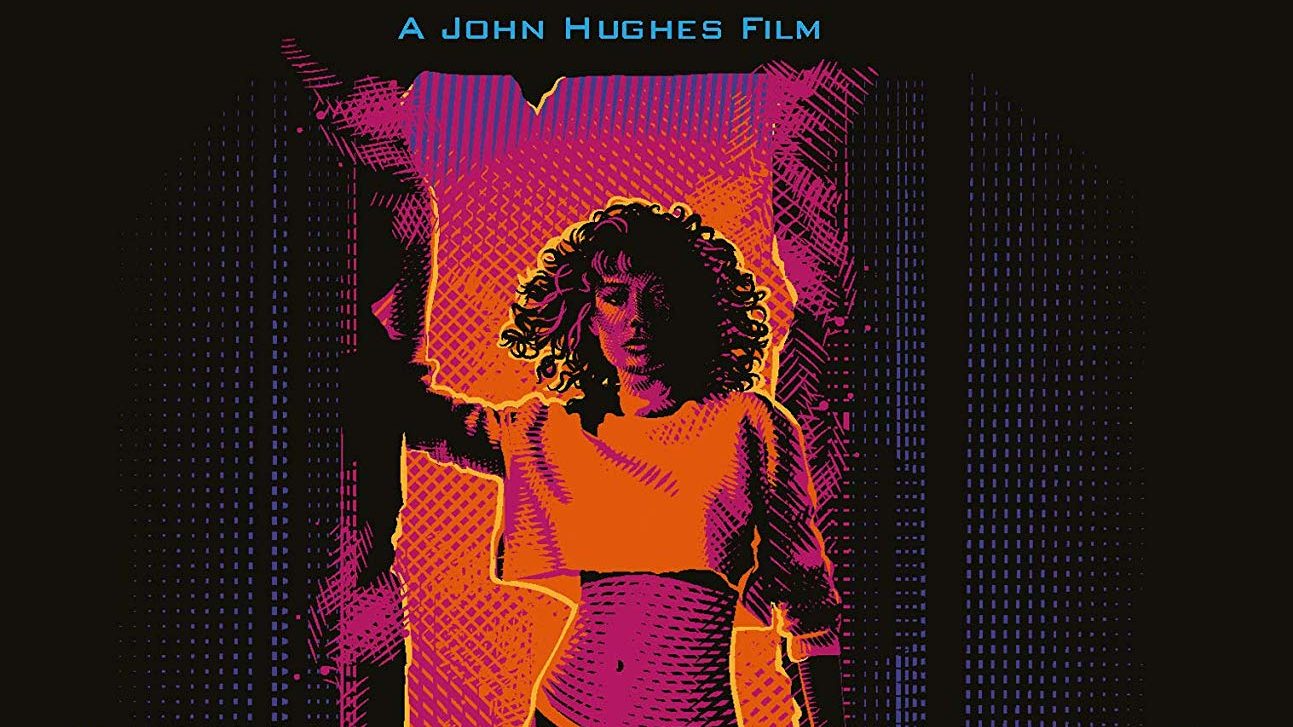 Adam takes a journey back to 1985 for the not-so-PG-13 Weird Science.  Arrow Video is releasing the film on Blu-Ray with all-new extras and a 4K Transfer.

Wow, 1985 had to be a weird fucking year to make movies.  The pun wasn’t intended.  Watching John Hughes’ Weird Science, one is struck by this very sentiment with every passing scene.  Still entertaining and fun but the film with ample amount of nudity, language and general un-PC behavior would never have received a PG-13 nowadays nor would probably be made today.

Gary (Anthony Michael Hall) and Wyatt (Ilan Mitchell-Smith) are losers of the highest order, made all the more obvious by an incident in the High School Gym that half the girls in the school witnesses.  Pondering one night of what would make them popular, whilst watching the original Frankenstein, the two horny teens decide to create the woman of their dreams by using Wyatt’s computer.  A bit of movie-magic ends up with the teens creating Lisa (Kelly LeBrock).  Lisa not only guides them on the ways of being popular but manage to teach them a lesson or two (maybe the wrong lessons but who are we to judge?).  Throw in Vernon Wells straight out of The Road Warrior, Bill Paxton as the Older Brother that was shat out of hell, and Robert Downey Jr (before he was Robert Downey Jr) and you have the recipe for a highly entertaining movie.

It is odd, to say the least, to go back to the oeuvre of John Hughes in this “woke” era to see how really questionable a lot of what passed for comedy (e.g. Long Duck Dong in Sixteen Candles for examples).  Even here Weird Science takes some deep breaths to get through.  Some may want to skip a revisit all together because of this fact.  It does present a fascinating look back at the 1980s and all its crapulent glory.  Weird Science isn’t a bad movie or a movie so far out of line that it shouldn’t be rewatched.  In fact, it has some salient points to make about image that is only lightly touched upon but definitely still rings true.

That being said, it’s still a fun and funny mash-up of High School Comedy and High Concept Science Fiction.  There is something hilarious about a film about two teenagers that create a dream composite sex pot only to never have sex with her/it and to actually learn a few lessons from her/it.  Gary and Wyatt are good kids just looking for what every kid looks for in High School; popularity and the opposite sex.  The film allows Lisa to be a mentor of sorts for them, not giving them what they want but (as the song says) giving them what they need.

One wonders after the trifecta of Sixteen Candles, Weird Science, and Breakfast Club that Anthony Michael Hall didn’t turn into the biggest comedic forces of the 1980s.  One also wonders why he wasn’t cast a Ferris Bueller.  Weird Science is Hall at his loosest and best.  There isn’t a moment that Hall doesn’t take a turn it into a moment for him to shine.  Equally as good is Bill Paxton who was just adding scene-stealing part after scene-stealing part after the toad that is Chet.  Paxton’s Chet is the model for Asshole-Big-Brother parts from this point forward.  It is all Paxton, only some of Hughes writing, that creates this iconic role.

With that said the film belongs to Kelly LeBrock as Lisa.  Playing the part as Part Bride of Frankenstein and Part Yoda, LeBrock shines like the star she is.  Hughes gives her both moments to shine comedically and dramatically.  There isn’t a scene that she comes into that she doesn’t control everything.  Hughes adroitly writes Lisa as a higher lifeform that knows that none of these boys will ever touch her let alone be with her.  The only part that one would consider dated is just how much Hughes over fetishize and sexualizes her to the point of absurdity, though that could be the point that Hughes is trying to make.

At the end of the day, Weird Science still stands as one of the best of the High-Concept High School films of the 1980s (not the best, we all know that’s Back to the Future).  It’s great to see other than a few bumps Hughes’ most commercially straight-ahead comedy still shines as bright as it did in 1985.

This New restoration by Arrow Films from a 4K scan of the original negative is beautiful.  The hyper-stylized way in which Hughes and Cinematographer Matthew F. Leonetti have decided to shoot Weird Science in only benefits the transfer.  The contrast levels and color saturation are perfectly balanced giving the image a better-looking feel than the previous editions.  I have been on record for a very long time for my dislike for most Universal Catalog titles (produced by Universal).   Arrow Video’s transfer has nary a sight of DNR or cleaning of the grain, giving the film a beautiful sheen of grain.  Bravo to Arrow Video for giving us such an amazing transfer.

The film offers three different cuts of the film;

One may wonder what the differences are.  Well, the only difference between the extended and the theatrical cut are two additional scenes.  One is where Gary and Wyatt are watching Frankenstein while they compare it to other films being “scarier” as Gary hilarious begins to cook crap in the house.  The other scene begins with the Devo Heads and is in the midst of the party.

The Edited-For-TV has a whole featurette that runs 94-minutes discussing the various edits made not just for language but for content as well.  The featurette is quite hilarious and entertaining to watch as is the Edited-For-TV version.  Those familiar with watching Weird Science on TBS, TNT, USA or WGN will be right at home with this version.  Including the fact that it’s a Stand-Def transfer that’s not bad quality but is framed 1.33:1, taking you right back to 1988 when you would have seen this version. Note the film does come with Subtitles, an odd benefit.

The 18-minute split-screen comparison of the edits is hilarious and enlightening to the TV-Censoring process.

Casting Weird Science is an all-new 6-minute interview with casting director Jackie Burch.  Burch discusses the third film she did Hughes.  Some great insider information like who was up for Lisa other than Kelly LeBrock (one of which was Sharon Stone).  Burch goes over the casting of the various characters, including Vernon Wells and Michael Berryman.

Dino The Greek is an all-new 7–minute interview with supporting actor John Kapelos.  Kapelos is known for his roles in Sixteen Candles and Breakfast Club.  Kapelos is a great interview giving not only his history getting into the acting but also gives the skinny on what the word “Malaka” means (it’s great).

Chet Happens is an all-new 20–minute interview with special makeup creator Craig Reardon.  Reardon gives a detailed breakdown of how he came onto the project, the work that was done, and how he almost got Back to the Future but ended up on The Goonies and how that lead to Weird Science. The interest is a great mixture of interview, behind-the-scenes photos, and b-roll footage.

Fantasy and Microchips is an all-new 10–minute interview with editor Chris Lebenzon.  Lebenzon known for working with director Tim Burton on his classic films here discusses first his origins as an Editor moving to Los Angeles and got into Editing working on things like One from the Heart, The Outsiders and eventually how he was hired for Weird Science.  Other tidbits include how multiple editors came onto the project and his relationship with Hughes.

Ira Newborn Makes The Score, an all-new 13–minute interview with the composer.  Newborn discusses his theories on making the musical score for Weird Science and how he came to use the Synth Score sound.  Tidbits include how he was only given about 5-weeks to edit Weird Science, much to his chagrin, and also how he only had 2-weeks to score Ferris Bueller’s Day Off.  From the account of the work done on Weird Science from Newborn, it sounds like he had a contentious relationship with the director.

Round out the Special Features is Theatrical Trailers, TV Spots, Radio Spots, and Image Galleries.

The Theatrical Teaser is 2.5-minutes long and is just that, a teaser that shows off the guys making Lisa. The Theatrical Trailer is 90-seconds and more of a traditional trailer along with the trailer guy voice over.  The Two TV Spots last about 60-seconds.  The Image Galleries are broken down into three sections; Shooting Script, Production Stills, Poster, and Video Art.  The Shooting Script is by far the best gallery as it states includes the entire 134-page script you can navigate through. Production Stills also can be navigated as there are about 120-stills to look at.  Finally, the Poster and Video gallery contains about 23-stills of various Movie Posters, Vynil covers for 33” and LPs, VHS, and DVD covers from around the world.

Weird Science is one of the best High-Concept Comedies of the 80s.  Arrow Video has given it the deluxe treatment and shouldn’t be missed. Highest possible recommendations!!!!

Arrow Video’s Blu-Ray of Weird Science is out now