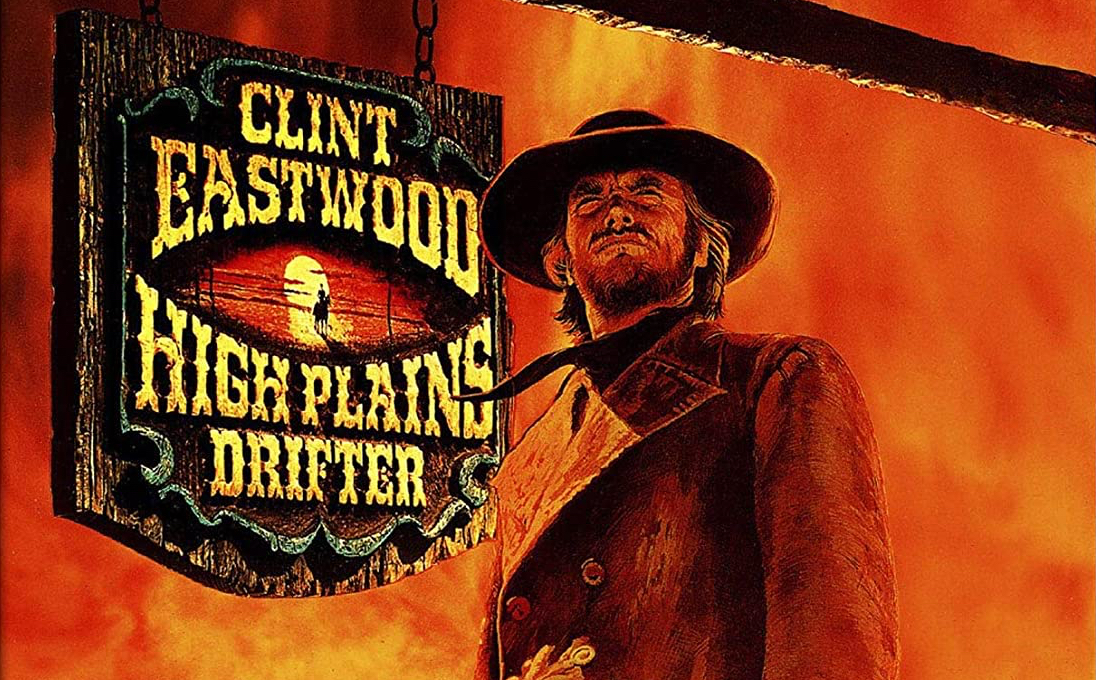 High Plains Drifter is resurrected back to Blu-Ray with a new transfer and new extras from Kino Lorber’s KL Studio Classics line.

More a horror film than western High Plains Drifter is a lot more complex now than it was fifty years ago.  It still stands as one of the best westerns of the 70s.

A Stranger (Eastwood) comes into the town of Lago.  The townsfolks are not welcoming of strangers and especially this one.  The reason why is its deep-seeded secrets.  Somehow the Stranger knows these secrets and uses this against the town.  What begins as an all-out assault of the town and townspeople becomes more and more clear an act of vengeance.  The Stranger having more of a tie to Lago than first appears.

To say that High Plains Drifter is a complex film for these days and times is an understatement.  There is no way to get around the Eastwood’s characters rape of a woman at the beginning cannot be justified.  Now, and even then, this sort of sleaze cannot be excused.  One could make the argument that Eastwood is showing that the character is truly from hell.  The other side is that it’s just plain troubling.

The film is extreme in all ways with its scenes of a Marshall being whipped that goes on for well over 3 minutes.  These moments go overboard but it seems like this is the point.  That these were troubling times and that greed corrupts absolutely.  Nothing in this film is nice and smooth.  Everything is rough and coarse.

That is not to take away from High Plains Drifter.  In fact, these things add to its complexity and the case that this is a horror film rather than a western.  Eastwood essentially remade the film more than a decade later with Pale Rider. Though Pale Rider is nowhere as powerful as High Plains Drifter.  It is because of Eastwood’s willingness to make people uncomfortable with the film’s violence even the violence perpetrated by its supposed “hero”.

The (new?) transfer done by Kino is nothing short of miraculous.  The film’s image which goes from a dusty bleached out day time to contrast filled nights is beautifully reproduced here.  The finale, for those who are familiar, with the deep red color is no problem whatsoever for this edition of the film.  Compared to other releases this newest release is amazing.

The newly recorded commentary by Filmmaker Alex Cox is an interesting one.  Both a historical and critical one Cox discusses various aspects of the film.  From its homage/reference/similarities to Django the Bastard, The Great Silence, Joe Kidd, the work of Don Siegel, and Sergio Leone.  The sexual assault in the film.  The complicated nature of the film.  The production in northern California.  Eastwood’s hatred of smoking cigars.  The film’s closeness to the Italian Westerns specifically the ones about revenge.  Cormac McCarthy.  High Noon.  The Production Design and the literal painting of the town red.  And Much more.

Interview with Actress Marianna Hill (14:12) – the actress in this new interview discusses Eastwood’s directorial style, how she was cast (after she had to be turned down a role in Joe Kidd), the role Callie, her thoughts on the sexual assault of the character in the film, and more.  Hill’s interview is an interesting one for sure.

Interview with Actor Mitchell Ryan (8:14) – the new interview with Ryan, it should be noted, was recorded during COVID-19 and thus done via Zoom.  The actor recounts meeting the director, being cast, the role of Dave Drake aka one of the Gold Mine owners, working at Mono Lake, and more.

Interview with Actor William O’Connell (16:12) – a new interview with the actor that plays the Barber in the film.  Beginning with his origins and beginnings in Southern California that eventually led to working as a younger actor before the Korean War which as a reservist that he had to go, after using the GI bill and going to Scotland to be trained as an actor, meeting Alec Guinness, and so much more.  O’Connell has so many interesting tidbits and anecdotes that it’s too good to ruin.

A Man Named Eastwood (7:08) – is a vintage making-of from the time of release.  The first part of this EPK is more of a biography of Eastwood’s career up until that point.  Don’t let the first 2-minutes dissuade you from watching.  Any fan of Eastwood will love this featurette.  It does include some great 16mm footage of the making of High Plains Drifter with Eastwood directing on the set.  It’s interesting seeing Video Playback back in ’73.

TRAILERS FROM HELL with Josh Olson (2:33) – the micro commentary from Olson discussing Eastwood’s second directorial effort, the set, the score, and more.

TRAILERS FROM HELL with Edgar Wright (2:32) – the micro commentary from Wright discusses one of his favorite westerns and how dark and twisted the film is.

Two Theatrical Trailers (New HD Transfers) – Trailer 1 (2:30) and Trailer 2 (1:25) are beautifully restored.  One only has to watch the Trailers from Hell episodes included here to see the job that they’ve done at restoring the trailers.

Radio Spot (0:54) – Played with an Image of Eastwood from the film

KL Studio Classics Blu-Ray of High Plains Drifter is a true winner.  A beautiful transfer and a wealth of special features make this the HIGHEST POSSIBLE RECOMMENDATION.