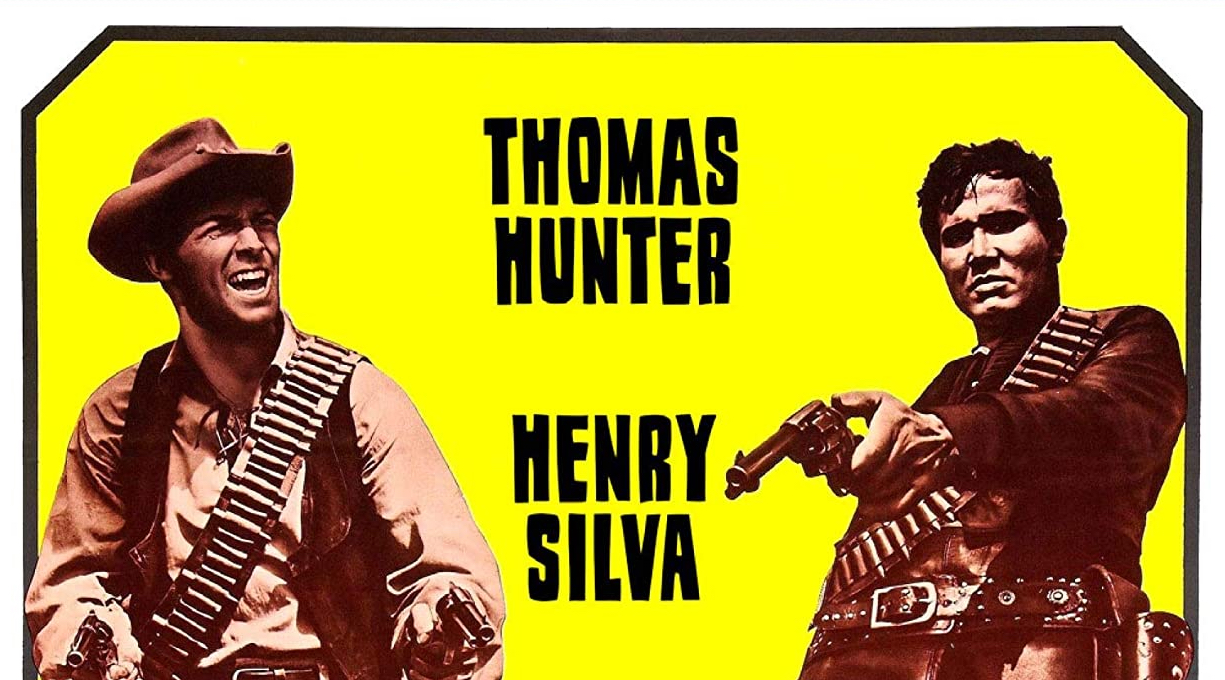 Henry Silva goes hard as the villain in The Hills Run Red.  Kino Lorber has released another fine but forgotten Spaghetti Western.

Different films are elevated because of different things.  Some are raised by the direction or editing or score.  Others by the unique production design, story, or special FX.  In the case of Lee W. Beaver/Carlo Lizzani’s The Hills Run Red is the indelible performance by one Henry Silva.  Silva playing the secondary villain, Mendez, goes over-the-top and hard.  The result is a compelling mishmash of ridiculousness and actual thoughtful acting.

Two Texas “Rebels” are on their way to Mexico with a cache of Gold.  One Ken Seagull (Nando Gazzolo) gets to flee. While the other Jerry Brewster (Thomas Hunter) is intercepted by the Army.  Jerry is put into a terrible prison with only the thought of his wife and child to keep him sane.  Five years later, Jerry is released and finds Seagull betrayed him and killed his wife.  Jerry now calling himself Jim Houston sets out on the road to revenge.  In Houston/Brewster’s way include the psychopath Mendez (Silva) and an assorted lot of ranch hands and western stereotypes.

Lizzani’s film does manage to have a few tricks up its sleeve on its way to the inevitable ending.  The film’s biggest ace is Silva and his performance as Mendez.  Silva doesn’t just chew scenery he devours it.  With his arched laugh, the strange accent, and the devilish grin in his eye the actor manages to create a character that is straight out of the Looney Tunes and Batman ’66 rogues gallery.  It is not to say that the performance is bad.  It’s beyond good or bad.  It’s an optical illusion. One that has to be seen to be believed.

The Hills Run Red is your standard straight-ahead Italian Western with revenge on its mind.  It’s the truly inspired work by Silva that elevates this film from perfunctory to something special.  That and someone cutting a tattoo off their arm but you’ll have to see the film for that.

It’s a wonderful hi-def version of the film.  The colors, sharpness, and most importantly the grain structure all is beautifully rendered on Blu-Ray.

The newly recorded commentary by Filmmaker and Western Historian Alex Cox is another winner.  The director is also an expert and scholar on Westerns in all its shapes and forms.  Here unlike his fantastic commentary for High Plains Drifter, he’s discussing the Spaghetti Westerns.  Details that Cox goes over include the film is loosely based on One Eye Jack (the Marlon Brando directed film), the Ennio Morricone score (which is a great one), how the Italian used the Confederate and Union Soldiers in different ways than American Westerns did, the career of Thomas Hunter, the career of legendary producer Dino De Laurentiis, the sorted and varied career of Henry Silva, the terrible theme song (which was a staple of this type of Western), the career of Lee W. Beaver aka Carlo Lizzani, Lizzani’s directorial style, the career of Dan Duryea, the amazing western set on the De Laurentiis studios for this film and other westerns, the career of Nicoletta Machiavelli, the more psychological aspect of this western which was out of the norm for an Italian made of the time, Henry Silva’s arched performance, and much more.  Cox does a great job of giving us a context and background on the production of this surprising Western.  Note that like his previous commentary there is a fair amount of silence, but patient reviewers will rewarded.

The Hills Run Red is all about the Henry Silva.  Recommended!!!