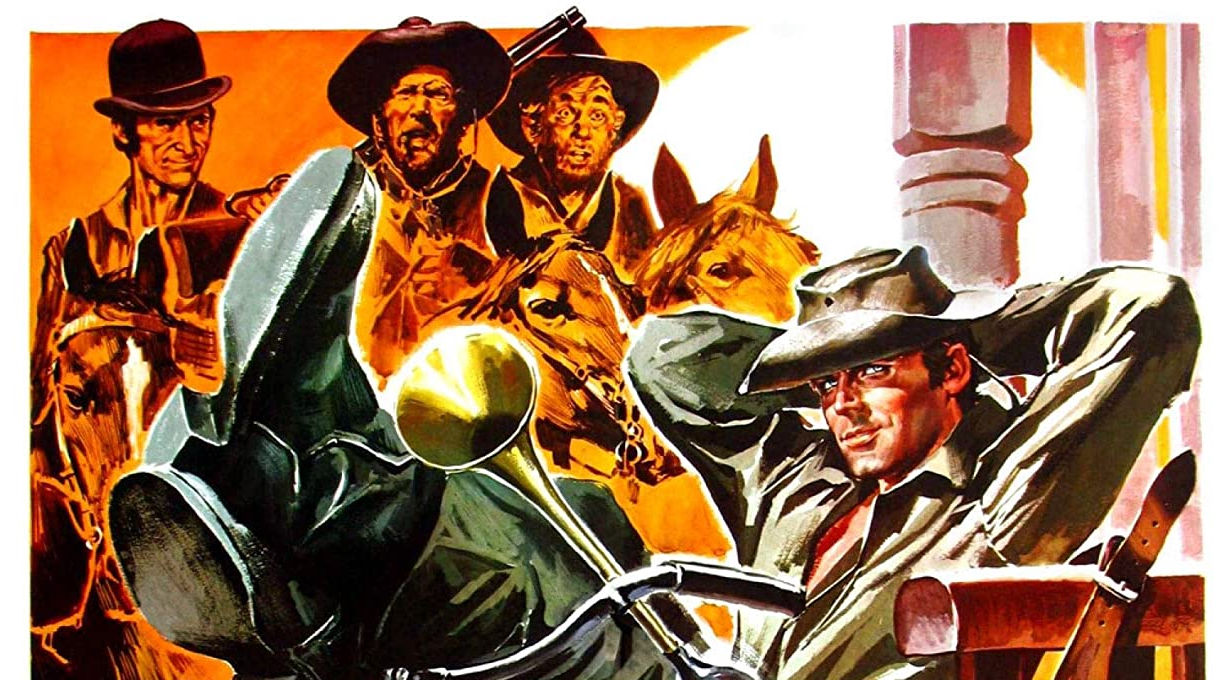 Man of the East, a Terrence Hill Spaghetti Western Comedy makes its US Blu-Ray Debut from Kino Lorber.

Having Terrence Hill in a Western Comedy without Bud Spencer is like Peanut Butter without the Jelly.  Man of the East finds good substitutes (e.g. chocolate) in Harry Carey Jr, George Walcott, and Dominic Barto.

A trio of criminals (Carey, Walcott, Barto) loses their leader a man they called the Englishman.  They attempt very badly to hold up a stagecoach including a Dandy of an Englishman (Hill).  All converge on their leader’s old home to find that Dandy turns out to be their Leader’s Son, Sir Thomas Fitzpatrick Phillip Moore.  No sooner than they meet does an Evil Cattle Baron (and his son) comes into the picture.  Is there any other kind of Cattle Baron but Evil?  With a promise, the trio has made to The Englishman.  Thus, begins the trio turning Tom into a man of the West to be able to defeat said Evil Cattle Baron (and the Baron’s Son).

Enzo Barboni aka EB Clucher the director of They Still Call Me Trinity brings that sort of bawdy broad comedic sensibilities to Man of the East.  Though unlike Trinity, Man of the East is more congenial than the hilarity pugilism of the Bud Spencer and Terrence Hill Trinity movies.  Here Hill is front and center which gives the film a very different feel while keeping to him as the type we expect from Hill.

Surprisingly, the film feels more like The Quiet Man than Trinity or any other western with fist-a-cuffs being the order of the day rather than shootouts.  In that respect, Man of the East excels and is at its best; people slugging it out.

It’s a wonderful hi-def version of the film.  The colors, sharpness, and most importantly the grain structure all are beautifully rendered on Blu-Ray.

The newly recorded commentary by director Alex Cox is an informative one not only on this film but the Spaghetti Western Comedies as a whole.  The director is also an expert and scholar on Westerns in all its shapes and forms.  Here unlike his fantastic commentary for High Plains Drifter, he’s discussing the Spaghetti Westerns.  Details discuss include the comedy in the film, the They Call me Trinity films, the duo Bud Spencer and Terrence Hill, how this was to be the third Trinity, the career of Harry Carrey Jr, the career of Terrence Hill, the strange reimagination of director Enzo Barboni as EB Clucher, the rarity of dogs appearances in Westerns, the massive success of They Call Me Trinity and Trinity is Still My Name, the Sergio’s (Corbucci and Leone) thoughts on the Lowbrow Comedies like Man of the East and Trinity, the common laws of the era in both England and the US, more.  Note that like his previous commentary there is a fair amount of silence but patient reviewers will be rewarded.  The reviewer’s favorite part is Cox literally popping open a bottle of Kentucky Bourbon and taking swigs throughout the commentary.

The broad comedy of Man of the East will appeal to the fans of Bud Spencer and Terrence Hill.  Recommended!!!