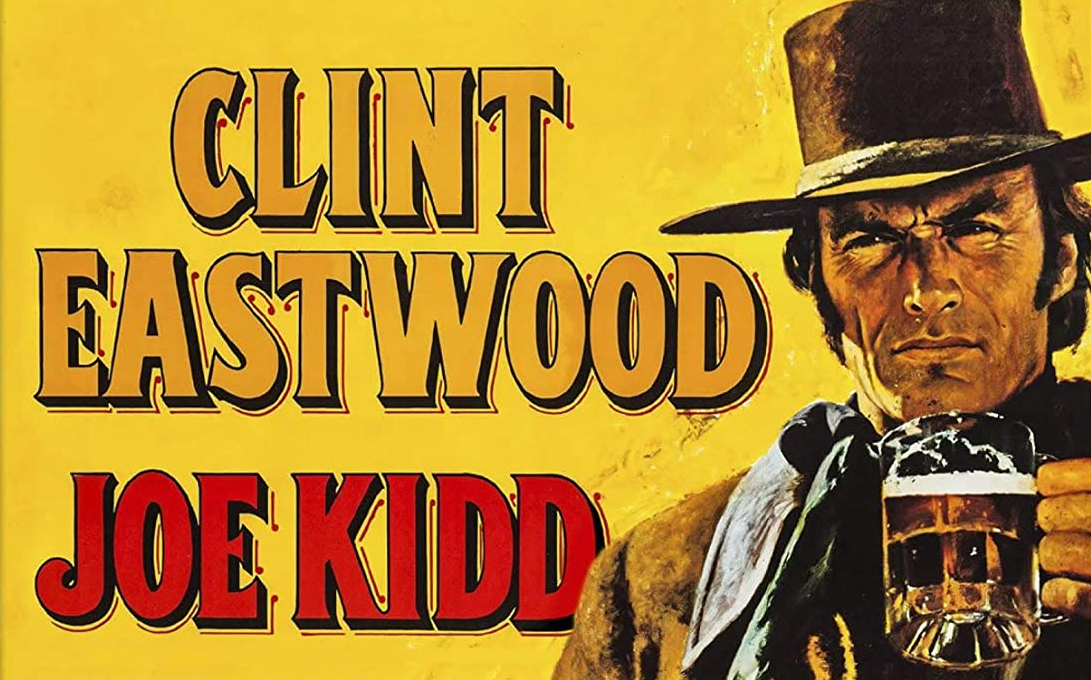 Joe Kidd is back on Blu-Ray with new extras from Kino Lorber’s KL Studio Classics line.

John Sturges never met an action story he could not bend to his will.  Joe Kidd is no different.  Armed with an interesting script by Elmore Leonard and super star Clint Eastwood the western is a lean mean action thriller.

After spending the night in jail for hitting the town Marshall, Joe (Eastwood) goes to court for sentencing for poaching and the assault.  He walks into the middle of a Land war between the courts and Luis Chama (John Saxon).  Trying to ignore this political upheaval he is thrown into the mix and is hired by Frank Harlan (Robert Duvall).  Joe gets more than he bargains for as Harlan is planning on executing Chama over this dispute (Harlan owns the land Chama and his people rightfully own).  Joe trapped between Harlan and Chama in a battle of wills is forced to pick a side.

Sturges lean and economical direction, and Leonard’s sharp script (that recalls his 3:10 to Yuma short story) elevate Joe Kidd beyond standard fare.  Duvall and Eastwood going toe to toe to see who can be more laconic is another of the film’s gems.  There are some great action set pieces including a sniper shoot out that’s truly aces.

Joe Kidd’s biggest issue is Saxon.  He’s sorely miscast as a Mexican Revolutionary.   Even he’s knows they should have gotten Edward James Olmos or someone of his ilk in the part.  That aside Joe Kidd is definitely a top rung Action Western

Joe Kidd has never looked better than it does here.  The amazing Bruce Surtees photography of New Mexico and Central California is perfectly reproduced in high definition.  As compared to the Universal Blu-Ray disc released some years ago.  The image’s grain structure is the big different.  Kino’s disc feels more film like.  The Universal has just enough DNR to wipe most of the grain off to give it that artificially clean look.  Kino’s transfer also is sharper and color reproduction appears to be more robust.  It’s an all-around improvement from the previous disc.

The newly recorded commentary by Alex Cox like his one for High Plains Drifter is aces.  Cox, not just a writer/director (Repo Man forever!) but a scholar and critic specializing in Westerns.  Cox does a wonderful job of not only giving us the history of the production and leaves room for critiquing the film.  Cox discusses; Eastwood’s career post-Spaghetti Westerns and leading up to 1972 and the production of Joe Kidd.  John Sturges as a director of westerns and as the director of Joe Kidd.  Elmore Leonard as a writer and the screenwriter of Joe Kidd.  The work and career of both John Saxon and Robert Duvall.  During this time how Fox tried to lure Eastwood away from Universal with the prospect of a remake of The Great Silence.  His dislike of the Lalo Schifrin’s score. Cox does a great job of adding logical sardonic comments that add to the enjoyment of the film and never takes away from it.

Interview with Actor Don Stroud (9:07) – Stroud who plays one of the secondary villains discusses how he got the part post-Coogan’s Bluff. The actor discusses how Eastwood and Sturges didn’t get along.  A great story involving ice cream.  Working with Robert Duvall and of all things playing Tennis.  Working with the unique gun that his character uses.  Stroud is a great enthusiastic interview giving some great anecdotes.

Radio Spot (0:59) – Played with an Image of Eastwood from the film

KL Studio Classics again have delivered the goods.  Their Blu-Ray of Joe Kidd is the Highest possible recommendation for any Western Fan.