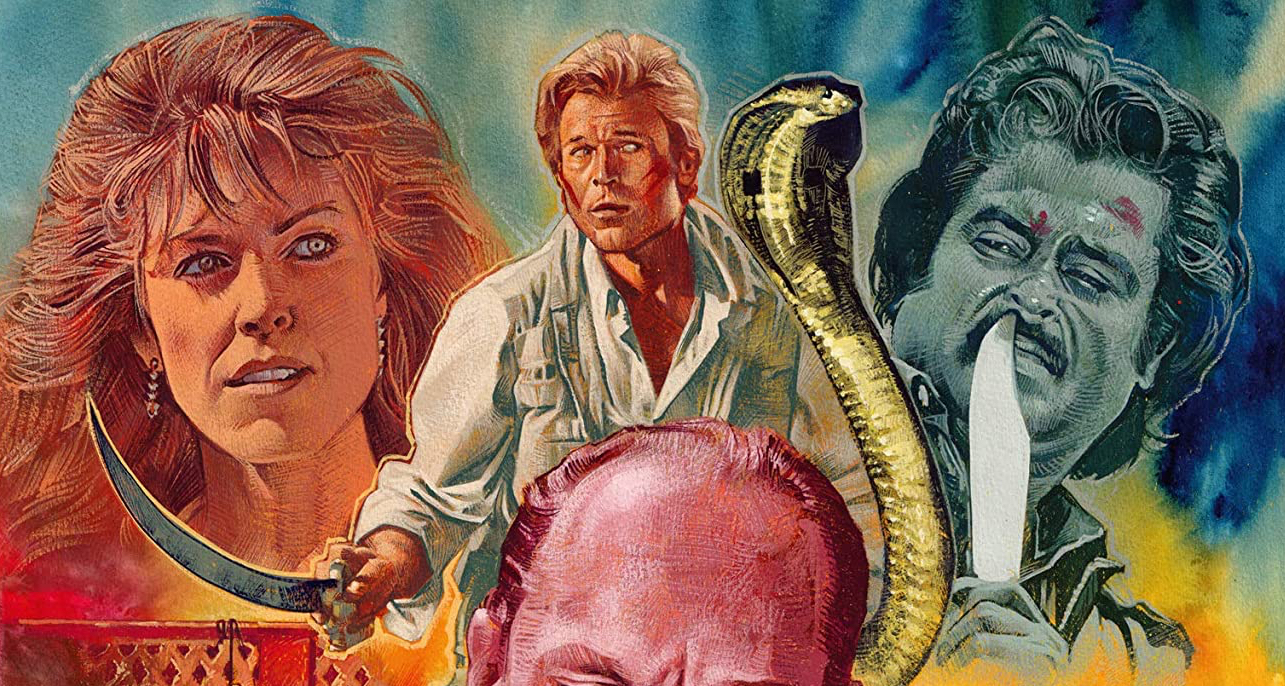 The films Nico Mastorakis produces (and sometimes directs) like the man are one-of-a-kind.  Bloodstone takes the Indiana Jones-style adventure and rewrites it more like Big Trouble in Little China.

There is no way to truly make one understand the grandeur that is Dwight H. Little’s Bloodstone unless one has seen Bloodstone.  For a specific type of action fan, this is a found treasure chest of wonderfulness.

Newlyweds, Sandy, and Stephanie McVey (Brett Stimley and Ana Nicholas) are on their honeymoon in India.  These dolts are eventually embroiled in an international scheme to smuggle a giant Ruby.  Stephanie is kidnaped and Sandy is forced to team up with a much more capable Shyam Sabu (Rajinikanth) part-time Taxi Driver part-time Adventurer.  It is only working together will they be able to save Stephanie from what else… a German Smuggler (Christopher Neame).

Let’s be honest. Most films, especially 80’s films, don’t have the balls to make their charmless WHITE lead actor the idiot less capable hero of the picture.  Brett Stimley has half the charisma and none of the wit that Rajinikanth brings as an actor or action figure.  You’re naturally drawn to whatever Shyam Sabu is doing on screen and how he’ll get them out predicaments, that Sandy puts them into.

Screenwriters Nico Mastorakis and Curt Allen understand that Sabu is the hero of the piece and treats him as such.  The film goes one step further by making Sandy a truly ugly American and one that feels like he’s the hero.  The boldness of the script and Little’s direction is that they make no qualms about this.  Going so far as to have Sabu the entire film laughing at Sandy.

Rajinikanth as a lead is more than up to the task.  The actor is having a blast making this film at the same time manages to give a winning performance.  This isn’t just a performance but an actual adventure for him.  The enthusiasm translates onscreen to a character you wish had more than just one movie.

Bloodstone belongs with your copy of Jake Speed, Armor of God, Big Trouble in Little China as great off-kilter adventure films.  One that understands that who its true hero is.

Like the other recent Mastorakis production Bloodtide this film looks gorgeous. The brand-new restoration from a 4K scan of the original camera negative is nothing short of astounding.  This Blu-Ray’s transfer is astounding.  More so, when you do some research and look at previous transfers.  The color reproduction, grain structure, contrast levels, and sharpness are near perfect.

The newly recorded audio commentary by Dwight H Little is a fascinating tracking.  The director is joined by Michael Felsher of Red Shirt Pictures.  Little discusses the nuts and bolts of directing a film in India.  Felsher does a great job prompting the conversation about this fascinating Action film that was uniquely produced.  Little is brutally honest about how difficult a shoot it was. It is not to say he complains but rather sees a difference in the way films are produced.

The newly recorded audio commentary by journalist Bryan Reesman. Reesman does a great job of giving an oral history of sorts. Using the recollections of actors Ana Nichols, Jack Kehler and his own critiques and historical research. The journalist’s fast delivery helps with the entertaining delivery of a lot of information. I will say this I’m going to have to listen to this track a few times, happily I might add, there is so much information including discussion of India’s ever evolving borders, the superstar that was Rajinikanth, the regions where the film was produced, casting, the culture in India, and so much more.

Keeping it to Myself is an all-new 29-minute interview with Nico Mastorakis. The Producer and Co-Writer of Bloodstone begins with letting us know that he is filming the interview in the midst of COVID. If you have watched any of Mastorakis interviews you know you’re in for a treat. The man recounts, as only he can, about how Bloodstone came to be while he was thousands of miles away. The interview is more like a mini-movie documentary with intercutting of clips of behind the scenes footage, Interviews from others, an amazing clip package for superstar Rajinikanth that will make you want to see all his films as soon as possible, clips from Bloodstone, most importantly 7-minutes of outtakes from Bloodstone taking directly from the producers VHS collection, how it was edited, the voiceover work, and Mastorakis’ yet to be release classics like Glitch, Skyhigh, and .com for Murder. You’ll have just as much fun watching this highly entertaining and creative epic interview.

From Bollywood to Bloodstone is an all-new 22-minute visual essay on Indian Superstar Rajnikanth by Josh Hurtado. Hurtado narrates an account of Rajnikanth early life, rise to stardom, starring in Bloodstone and post Bloodstone career. It’s a great overview of the super star’s career giving you plenty of titles to watch if one is so inclined.

Bloodstone is a B-Movie Action Gem.  Arrow has given it a great transfer and extras.  RECOMMENDED!!!

Arrow Video’s Blu-Ray of Bloodstone is out now