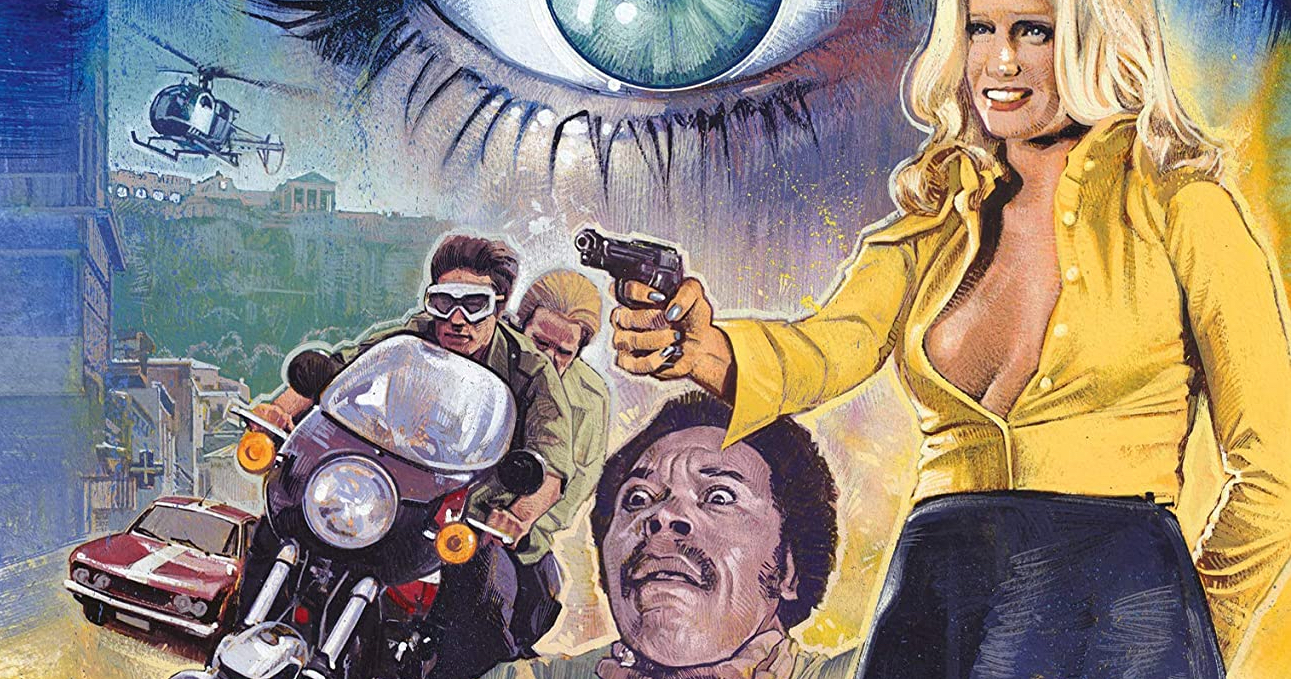 Nicos Mastorakis the mad genius of Nightmare at Noon started off with the smash hit Death Has Blue Eyes.  Arrow Video has released the film on Blu-Ray with all the trimmings.

Eurocult master Nicos Mastorakis’s debut film is everything that Mastorakis is known for; sex, violence, action, chases, and wild genre mash-up stories.  Death Has Blue Eyes is a supernatural spy film crossed with a Butch and Sundance style buddy field with two swinging cads about town sleeping with as many women as they can.  Yes, it’s a lot but with Mastorakis films it’s all a part of the milieu.

Bob (Peter Winter) goes to Greece for the most 1970s of vacations with his dude Chess (Chris Nomikos).  The Vacation plan is to con as many people as humanly possible, bed as many women as humanly possible (oftentimes together), drink, eat, and do as many drugs as they can.  For the first few days, this is exactly what they do.  That is until they meet their match in Geraldine (Jessica Dublin) and her daughter Christine (Maria Alfieri).  The mother turns the tables on the duo who knows must protect Christine and eventually find out that she has Psychokinetic powers.  Shady Government agencies, assassins, sex, car chases, helicopters, more sex, all taking place in Greece!

Mastorakis has an obvious affection for Butch Cassidy and the Sundance Kid as the film’s main triangle is one that is about the love between the two men.  The Powerful Psychic Blonde just happens to be coincidental.  Though to be fair, Christine (the powerful psychic blonde), is in an entirely different film than the two cads for the first half of the film.  Once Mastorakis’ film merges the two narratives the film flies.

The fun of any Mastorakis film (directed or produced by the man) is its willingness to do anything and everything to entertain those who watch it.  There is a wild sense of anything can happen during the runtime of Death Has Blue Eyes that epitomizes all of Mastorakis’ work.  One minute the film is fully invested in a sex scene to cut to a Hitchcockian set piece with an assassin chasing someone.

One would think that this would make the film a train wreck but that isn’t the case.  How everything is put together is masterful on Mastorakis’s part.  The way the film juggles the wildly divergent tones is one of the keys to Mastorakis’ entire career.  Death Has Blue Eyes proves that Mastorakis took on filmmaking fully formed.

NOTE: The disc gives you the option of watching in 1.85 (the theatrical presentation) or 1.33 (open matte as it was shot).  It should be noted that they appear to have framed for 1.85 but the 1.33 version is actually a little bit more pleasing to the eye and not zoomed in from the matte frame like the 1.85.

The Brand-new restoration from the original camera negative approved by the director is nothing short of stunning.  Arrow Video has done it again with a beautiful transfer of Mastorakis’ production.  The respective transfers are sharp and colorful.  Though the edge goes to the 1.33 version as it’s the entire filmed image.  There’s a sharpness and beauty to the open matte version of the film.  Though you cannot go wrong with either version as they’re both handsome images.

An Interview with Maria Alfieri (17:49) – this interview produced by Mastorakis begins with its own title sequence that ends (the title sequence not the) with a bit of shameless self-promotion that made this review laugh (in the best way possible).  Alfieri discusses her being cast, the negotiation, her original reaction to the script, the fact that her eyes are Brown, her thoughts on nudity and sexuality in the film and in her life, working with Mastorakis on the production, some of the behind-the-scenes drama that unfolded, working with the other actors, and much more.  The interview like Mastorakis’s other interviews on Arrow Video Blu-Rays are intercut, sometimes very cheekily, with scenes from the film, behind the scene photos, and split screens.  Italian with English Subtitles.

Nico Mastorakis (In His Own Words) (24:43) – much like in his interview on Bloodstone and Bloodtide this is an interview with many visual divergences beginning with a great title sequence celebrating the director’s birthday (which falls on April 28th).  Mastorakis begins by discusses that he’s recording during the second wave of COVID.  The director discusses the wild ride, with any Mastorakis interview, is it not a wild ride, how he came to make Death Has Blue Eyes.  This includes the king of Greek Porn, his revenge on TV that pushed him out, getting stiffed out of his profit participation, and much more. This is an interview that deserves to be experienced with some really great footage from Mastorakis’s early career in Television, Music Videos, and much more.  This is more than just an interview, it’s a visual essay created by the man himself that aims to not only inform but entertain as much as his films.  No one needs a commentary when Mastorakis creates an interview.  Because quite honestly, he creates the best interviews that aren’t interviews in Home video.

Dancing with Death (42:03) – is a selection of score tracks from composer Nikos Lavranos. This is literally an entire soundtrack.  A visual album as images fades in and out as Lavranos’ jazzy score plays.  Arrow has done one better by making the feature appear like a “music player” with an animated progress bar, along with the title of the track and the length of the track.

Theatrical Trailer (2:25) – Like many of the Euro-Cult films of the era this trailer is definitely leading on the impressionistic side featuring plenty of guns, car chases, motorcycle stunts, and of course lots and lot and lots of nudity.  Note: The trailer appears to be restored as it looks beautiful.

Extended Theatrical Trailer (3:32) – this extended trailer appears to be either very old or they’ve done a great job of aging it.  As with the first trailer, there are lots and lots and lots of guns, car chases, motorcycle stunts, and nudity.

Image Gallery (4:10) – the 25-image gallery consists of production photos, behind-the-scenes photos, posters, and home video art.  The gallery plays automatically, can be paused, and be navigated by using your remote’s next chapter and back chapter buttons.

Arrow continues its amazing work bringing the filmography of Nicos Mastorakis’ to Blu-Ray for all to see.  HIGHEST RECOMMENDATIONS!!!