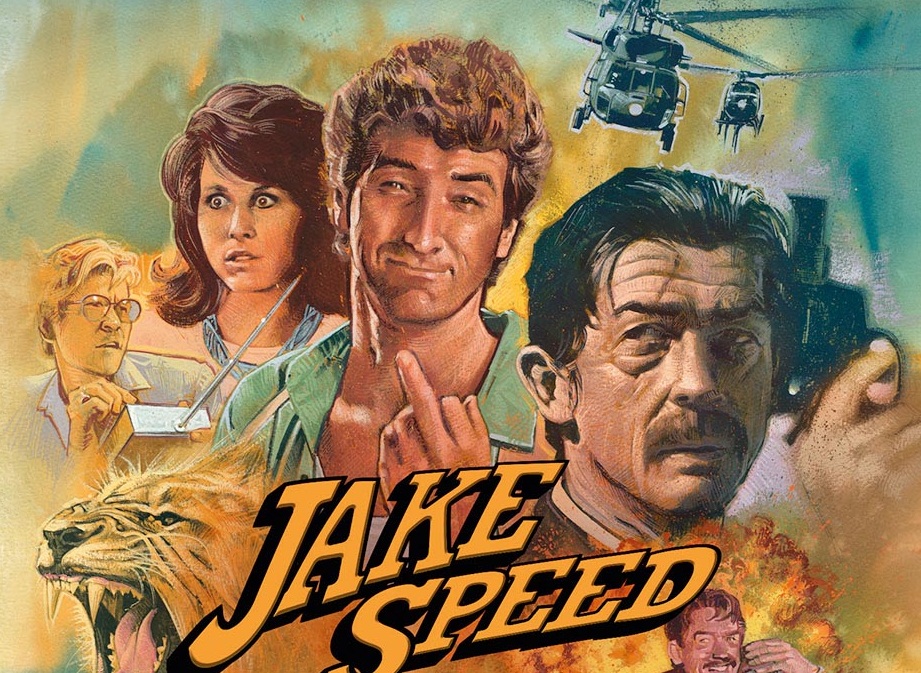 Not all Indiana Jones rip-offs are created equal.  Romancing the Stone and The Mummy (1999) being the best of the best.  All iterations of Tomb Raider being in the mid-range.  Finally, all the rest are crap. Well, with one giant exception; Jake Speed (oh and of course Firewalker)

Margaret’s (Karen Kopins) sister has been kidnaped by White Sex Traffickers.  Margaret’s family, other than her grandfather, are a bunch of assholes blaming her.  Grandpa has a great idea; hire Jake Speed.  Great but Speed is a character from a series of Pulp-Novels.  Well… not so fast because it appears that both Jake (Wayne Crawford) and his partner Desmond (Dennis Christopher) are very real. Mercenaries for sure but… you know the good kind of Mercenaries.  Jake and Desmond convince Margaret to go to Africa with them to find her sister.  They find her sister in the hands of the vilest of the White Sex Traffickers (which is saying A LOT) in Sid (John Hurt) who, OF COURSE, has a history with Jake.  Many quippy-quips are exchanged along with much gunfire and an all-out assault from an SUV from Hell (rivals TANGO & CASH’s similar SUV).

For all intents and purposes, Jake Speed is a literal rip-off of Romancing the Stone more than it is any of the Indiana Jones films.  Even down to the sister being kidnaped plot Jake Speed has no qualms with being a Z-Grade version of that much better-made film.  That is not to say that this film is without its charms.  Crawford and co-screenwriter /director Andrew Lane have built a fun ride that is designed to entertain and nothing more.

Lane and Crawford also utilize the two best weapons to maximum effect.  Dennis Christopher as Desmond is having the time of his life.  The actor who never was given a true chance at Action Stardom or was even considered for that type of role is simply wonderful here.  Desmond though the “sidekick” role is definitely the more competent of the two and Christopher relishes every moment playing it to the hilt.  The other is, of course, John Hurt as Sid in full-on over-the-top sweaty slimy villainy.  Hurt gnashes on scenery like it was an overcooked skirt steak spewing lines so hilariously inappropriate you’d do double-takes.

Jake Speed may not be Raiders of the Lost Ark or even Tomb Raider but it’s definitely a fun ride worth buckling up for.  Especially, if you love ‘80s era Adventure films, this one has got you covered.

Jake Speed has never looked better than it does here. The film is colorfully shot on location. The new transfer produced by Arrow Video makes sure to take advantage of this. The image is sharp, with a robust grain structure giving it that gritty feel that 80s action films just effortless had.

Paperback Wishes, Cinematic Dreams is an all-new 21-minute interview with Andrew Lane the Co-Writer/Producer/Director. Beginning with his humble beginning with Jake Speed himself Wayne Crawford with their independent production of hits Valley Girl and Night of the Comet and how that got them their deal to make Jake Speed. Lane is very honest and gives a very clear understanding that they were up against the major Studios. How this was created out of an idea what if James Bond wasn’t a literary hero but a real-life one. The casting of Wayne Crawford as Jake Speed and Bruce Willis. The casting of Christopher Denis, John Hurt, and Karen Kopins. How Zimbabwe was chosen. How Cannon almost got involved. The challenges with production designing the film in Zimbabwe. The infamous truck and how they did the 3rd act set piece. The failure of the film at the box office. In lieu of a commentary track, this is a solid interview.

The Hard Way Reads Better is an all-new 12-minute interview with William Fay. Beginning with his time at UCLA Film School, Fay begins to recount how he was hired by Crawford, Lane, and New World Pictures. Some of the subjects that Lane discussed are discussed here but from a different point of view. Fay gives a great understanding of the challenges of making a $5 million budget to compete with other adventure films that cost five times as much. Another solid interview.

Jake Speed is worth the price of admission.  Recommended.