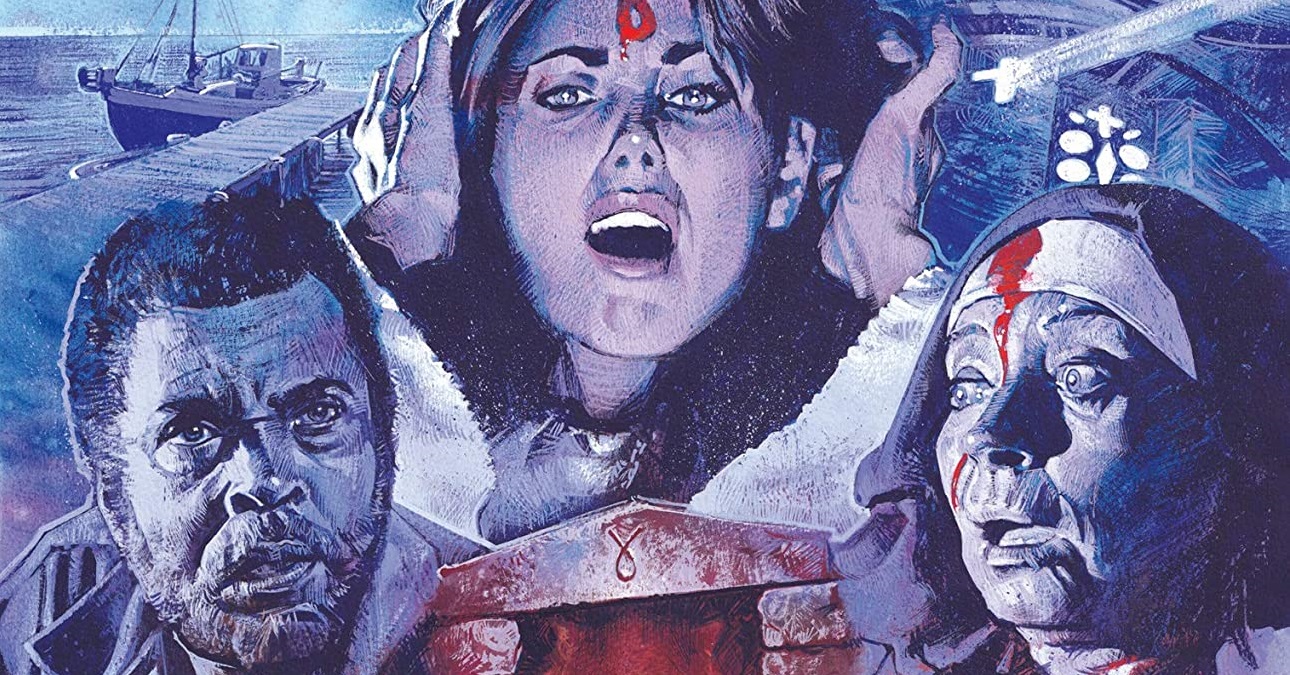 Takes a trip to the Greek Isles with legends José Ferrer, James Earl Jones, and Martin Kove.  Blood, nudity, demonic sex, James Earl Jones versus Jose Ferrer in an acting fight to the death equals an atmospheric cult classic.  Arrow Video has a winner in the Blu-Ray for Bloodtide.

The name Nico Mastorakis for a certain sector of Cult Film fanatics conjures images of B-Movie Low-Budget glory.  The Director is the co-writer/producer on Bloodtide leaving the helming to newcomer (at the time) Richard Jefferies.  Though Mastorakis’ fingerprints are all over this one.

Newlyweds Neil (Martin Kove) and Sherry (Mary Louise Weller) take a boat to a remote Greek isle to find Neil’s sister Madeline (Deborah Shelton).  What they find is Madeline working with sometimes drunk sometimes Archeologist Frye (James Earl Jones) and an isle that is not all that it appears to be.  Whether its island Leader Nereus (José Ferrer) or Sister Anna (Lila Kedrova) something is not right about the beautiful island.  Quickly Neil, Sherry, Frye begin to realize that there is more on this island than just sun and beautiful locales.  Something sinister, something demonic, something under the water haunts this town and begins to possibly possess Madeline.  Can that possession be broken?

Part of the strength of Bloodtide is the cast that doesn’t play it like it’s a low budget horror film.  Ferrer, Jones, and Kedrova are flat out great in their roles.  Jones in particular as Frye is great as the Falstaff style figure of the piece.  Ferrer is incapable of being bad in anything, here he’s magnetic as the leader of this small island.  Their work together is electric and doesn’t feel like a low budget horror film.

The biggest strength is that Bloodtide does not play like a low-budget film or its subject matter with tongue in cheek.  That is the Mastorakis’ touch; taking everything seriously and getting the most out of a budget that may not be there.  Bloodtide is an undiscovered gem in Mastorakis’ filmography.

The brand-new restoration from a 4K scan of the original camera negative is nothing short of astounding.  Having done some research on the image quality of the previous versions of the film, the results were night and day different. This new Blu-Ray is razor-sharp with a healthy amount of grain making it one of the prettiest transfers of the year.

Audio commentary with director/co-writer Richard Jefferies.  Michael Felsher, CEO of Red Shirt Pictures, is the host for the Audio Commentary with Jefferies. Felsher is a great host guiding Jefferies through his beginnings in film, moving to his history with the project, and how he to the project.  This one is a great commentary as Jefferies suffers no fools and gives us an unfiltered commentary track.  Some of the great tidbits are how the development changed from Man-Shark to what Bloodtide is, how James Earl Jones, Jose Ferrer, and Martin Kove were cast, the Special effects, and much more.

Swept by the Tide – is a newly-filmed 29-minute interview with producer/co-writer Nico Mastorakis.  The character that is Nico Mastorakis discusses everything that you could possibly want to know about the production of Bloodtide along with a bunch of stuff that you don’t want to know.  This is about Bloodtide but it is much more about the man himself discussing his work as a whole.  The character, and trust me he’s a character is almost more fascinating than Bloodtide.  Well, maybe not fascinating but entertaining.  One of the many highlights is shit-talking about Don Simpson’s taste, how he got the financing for the film in one day, the restoration of the film among other things, and the starting of not one but two networks in Greece.

Rounding out the special features are the Original Trailer and the 2020 Trailer.  Both have been restored in 4K glory.  The 2020 trailer definitely has a modern flair where the original trailer feels very 1980s in its tone and execution.

Bloodtide is the real deal.  A great undiscovered horror film from the 1980s.  No shock it is tied to Nicos Mastorakis.  Arrow has given the film a beautiful 4K Restoration and extras. Recommended!!!

Arrow Video’s Blu-Ray of Bloodtide is out now