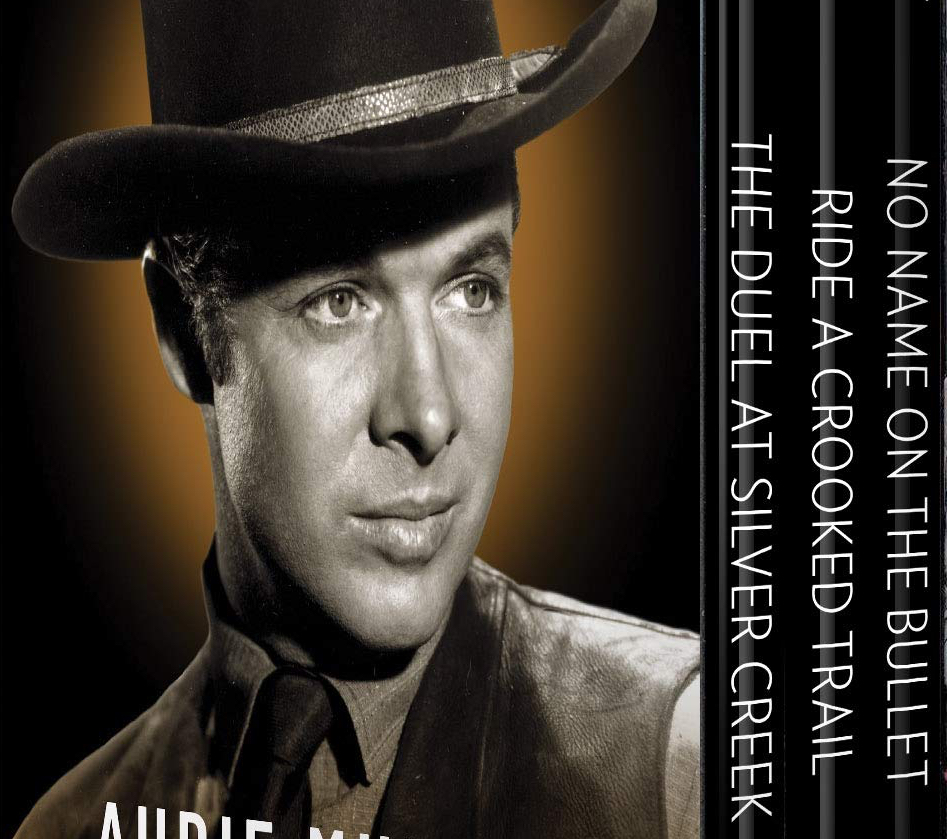 KL Studio Classics has put together a great collection of Westerns starring the WWII Hero turned Actor Audie Murphy that you won’t want to miss.

Don Siegel directs this lean Western programmer.  The film cast Audie Murphy as the Silver Kid a prospector turned fast drawing gunslinger out for revenge.  Claim Jumpers have taken his land and more importantly his father.  After those same Claim Jumpers is Lighting Tyronne (Stephen McNally) the Marshall of Silver City.  It is only enviable that the Kid and Lighting team up to fight against the Claim Jumpers.  The smartest aspect of the film is how the story is more of a gaslighting/battle of wills than an out and out gunfight showdown.  Siegel leans into the Noir-ish aspects of the film heavily.  Good girls, femme fatales, con men, grifters, cops, everything that you come to expect from a Noir except set in the old west. Though, in its final third act when everything comes together, Seigel stages a great huge gunfight.

The best film of the trio included here.  Ride a Crooked Trail is a nimble light on its feet bank heist film.  Murphy stars as the aptly named Joe Maybe who is mistaken for a Marshall by a Judge (played slyly by Walter Matthau). Maybe who’s designs on a very big score at the local bank is duped by not only an ex-lover (Gia Scala) but his rival in crime (a seething very young Henry Silva).  The film revels in the complications that in Maybe’s way.  The set pieces are not about fast drawing gunslinging but about the tension of how our anti-hero will get out of the situation.  Smartly, the film’s script (written by Borden Chase based on a story by George Bruce) never plays the Judge or criminals as dumber than Maybe.  Much of the fun is seeing how smart the supporting players are in the film giving both Silva and Matthau some of their better early supporting roles.  Director Jesse Hibbs with cinematographer Harold Lipstien, make a beautifully shot Cinemascope picture that uses the widescreen frame in a way that just isn’t used anymore.

If Duel at Silver Creek is the leanest, and Ride a Crooked Trail is the funniest, then No Name On The Bullet is the meanest and darkest.  Director Jack Arnold creates a film that is as much a great slow-burn western as it is a social commentary on violence and mass hysteria.  Murphy stars as the cool as ice laconic hired killer John Gant.  Gant comes into town looking for someone.  The central mystery is simple; who has Gant been hired to kill.  This simple setup brings the darkest of human nature out in all of the townspeople.  Murphy’s Gant though central to the plot and is almost never center stage.  It is the doctor/veterinarian (Charles Drake) that is pushed and pulled into the moral quagmire that is central to the film’s plot.  Arnold and cinematographer Harold Lipstien (who also shot No Name On The Bullet) use the Cinemascope frame for maximum tension.

The only non-Cinemascope film of this set has a pleasing transfer.  The color reproduction is amazing.

The best transfer of the bunch.  It’s not to stay that the other two are bad, but Ride a Crooked Trail is special.

A few scratches at the beginning belie a wonderfully beautifully sharp transfer.

The Duel at Silver Creek

The newly recorded audio commentary by Toby Roan is a great dissection of not only the film but the life and times of Audie Murphy.  Roan does a great job of giving the film context within the career of Murphy.  He also does a great job of detailing the production without it sounding like a dry dissertation on the matter.  In fact, the historian gives a lively commentary that is as entertaining as the film.

Rounding out the special features are the trailers; The Duel at Silver Creek, The Gun Runners, and Madigan.

The newly recorded audio commentary again by Toby Roan.  This time the focus is on the other actors like Walter Matthau, Henry Silva, and others.  The discussing of Cinemascope, the comedy, the action, and much more.  Like the previous commentary Ronan does a great job of making his track entertaining and not some sort of dry historical recounting, like the fact that Murphy and Matthau loved gambling. If you like the film you will definitely enjoy the commentary track that doles out a huge amount of information about the production, actors, crew, and just about everything you could want to know about Ride a Crooked Trail.

Rounding out the special features are the trailers; Ride a Crooked Trail, Night Passage, and Lonely are the Brave.

The newly recorded audio commentary by Steve Mitchell and Gary Gerani is another winner.  Unlike, Roan’s commentary tracks, this is informative but not the sort of deeply researched track that the Historian did.  Mitchell who directed the fantastic documentary King Cohen and Gerani who’s a screenwriter and critic do a great job discussing the film from a critical point of view.  They do happen to give historical context, but the free-flowing conversation is more focused on the film. There is a great bunch of anecdotes about Audie Murphy not just from his time in the Military but from behind the scenes lore and the production.  It’s a great track.

Rounding out the special features are the trailers; No Name on the Bullet and Man in the Shadow.

The Audie Murphy Collection is a definite RECOMMENDED!