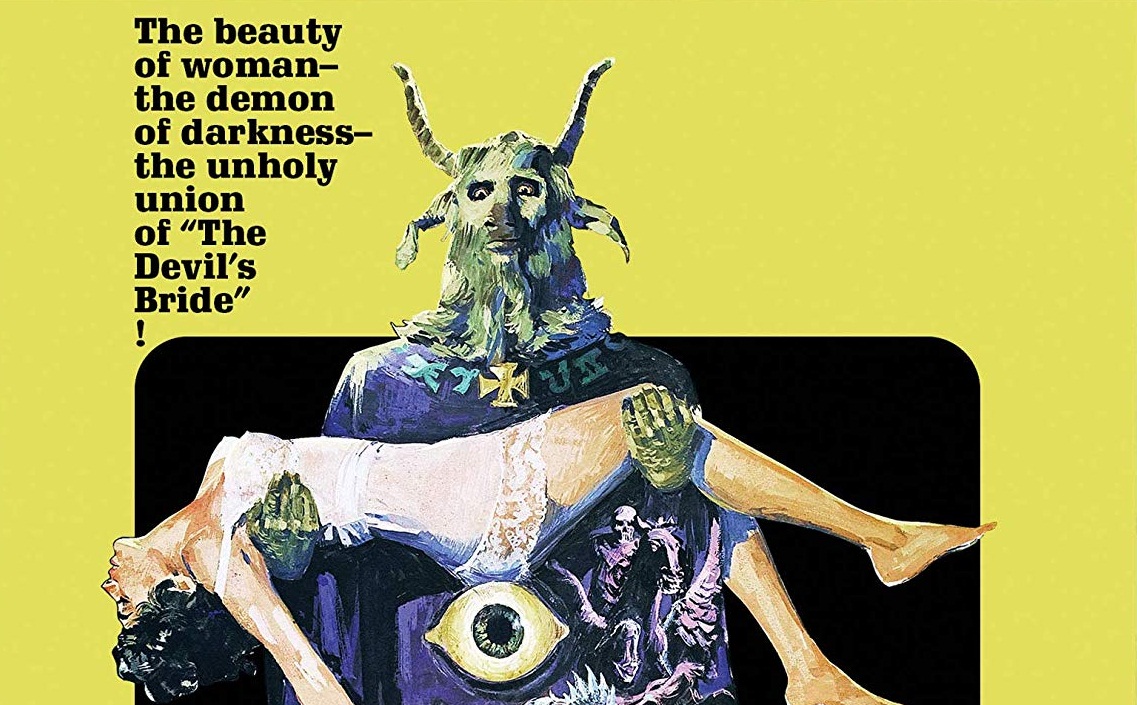 One of the best Hammer Films The Devil Rides Out gets the deluxe Blu-Ray treatment by Scream Factory with a new transfer and extras.

In my life, Hammer Horror films have been hit or miss.  Much of what I have seen has been later era and not very impressive.  Terry Fischer’s The Devil Rides Out definitely fulfills on the promises that many a Horror Fan have made to me that Hammer Horror rocks.  That the brand stands for intelligent well-written elegant (sometimes saucy) horror.  This Satan vs. Professors entry had me hook, line, sinker.

Nicholas, Duc de Richleau (Christopher Lee) comes to investigate the strange happening in the South of England.  After uncovering a group of Satanists led by the arched Mocata (Charles Gray).  What begins as a battle of wits quickly turns supernatural as the villainous Mocata possesses people to attempt to complete the ceremony that will release the dark lord himself.  Richleau and a small band of unlikely accomplices are the people in the way of the Antichrist on earth.

Anyone that loves Carpenter’s The Prince of Darkness owes it to themselves to see this obvious Carpenter favorite.  The melding of academia against the coming of end of days makes for a perfect stage for cerebral horror.  The Devil Rides Out is silly in sections, yes, but it never betrays itself by being tongue and cheek.  The serious tone that the film takes works in its favor.

The other strength lies with Christopher Lee in full form as a star, actor, and presence.  His Richleau gives one an idea of just how Lee would have played the famous Sherlock Holmes.  There’s an arrogance that feels endearing, in the way that only Lee could pull off.  Seeing him frustrated as the goofs around him fail to listen to his rules is a true delight during the 95-minute runtime.  The best does have to be the eventual face-off between Lee and Gray.

The Devil Rides Out truly lives up to its reputation as one of the great Hammer Horror entires.  If other Hammer entries are as thoughtful, smart, and fun as The Devil Rides Out I can’t wait to continue my exploration of the Genre Production House.

The new 2K Scan Of The 20th Century Fox Interpositive (also included is the StudioCanal restored master) are both luminous.  The picture is supported by a healthy amount of grain and bold color reproduction.  This isn’t a DNR’ed to death transfer wiped clean.  The transfer is warm and filmic in the best way possible.  Like a newly struck archival 35mm Print. The biggest difference between the two is the Aspect Ratio.  Where the newer Scream/Fox transfer is 1.78 the StudioCanal is 1.66.  Of course, the coloring, grain, and contrast are all slightly different and one will have an opinion of which is better.  My vote is to see which one likes better.

NOTE: If one wants to see the Older StudioCanal restored master you will have to select it through the Special Features Option.

The new Commentary is by Historians Constantine Nasr, Steve Haberman, and Richard Christian Matheson (son of the film’s screenwriter Richard Matheson). Those that have listened to Nasr’s commentaries on Scream Factory’s release for The Leopard Man and directing the behind-the-scenes documentary on their release of The Body Snatcher will understand the kind of detail, dry wit, and general entertainment you’re in for.  Adding Haberman and Matheson into the mix only adds to the proceedings giving us a bit more personal context as Matheson does recount some anecdotes about his father’s writing and this film in particular.

The Archival commentary by Christopher Lee and Sarah Lawson is by far the best special feature on the disc.  Lee, as he was in the Scars of Dracula commentary, is a delight as he recounts his experiences on this film and the work of Denis Wheatley.  This one is not to be missed.

Kim Newman on The Devil Rides Out is a 30-minute interview with the critic specifically about the Novel turned Movie. Beginning with the film’s origins Dennis Wheatley and the adaptation by Richard Matheson moving to preproduction to production. Newman deep dives into the film and anyone who knows Newman’s interviews on any genre film or filmmaker will recognize instantly his attention to detail. This is as much of a critique of the film as much as it’s a recounting making-of the film. The critic is so well versed and entertaining about the subject, it’s a breeze of an interview. Note, if you love this type of film have something to write with ready as Newman discusses quite a few films within the interview including a prequel which is not a prequel (but still is).

Jonathan Rigby on The Devil Rides Out is a 24-minute interview with the critic and author. Similar to Newman’s interview Rigby discusses the film but his focus is on the specific sub-genre of “folk horror”. This is more of a high-level overview where this lines up for the various including Terence Fischer and Christopher Lee and where they were in their careers before they made this film. Rigby is great at giving cultural context to the film and what was relevant at the time in the UK in pop culture and the arts.

Black Magic: The Making of The Devil Rides Out is a 35-minute handsomely produced making-of that includes interviews with screenwriter Richard Matheson, critic Marcus Hearn, author Denis Meikle, Rigby, author Phil Baker, Kiffy Strainer-Hutchins & Dan Strainer-Hutchins (children of SFX supervisor Michael Stainer-Hutchins) all contribute to the proceedings. The making-of is more of a traditional one with comments by everyone on the script development, casting, special FX work, and release. Many will want to watch for the Matheson interview sections.

Dennis Wheatley at Hammer is a 13-minute featurette specifically about the author who wrote many other genres but was famous for the occult and Satan-worshiping novels. Author Phil Baker and Jonathan Rigby discuss Wheatley’s novels, how Christopher Lee was apart of getting Hammer to adapt his books,

World of Hammer Episode which another episode of the BBC-Produced Series have been included on Scream’s other Blu-Rays for Quartermass and the Pit and The Vengeance of She which is narrated by Oliver Reed. This appears to be the first of the series as it is an overview of Hammer Studio and all of the genres they produced in. The Devil Rides Out is not mentioned. It’s great nonetheless especially if you’re just entering into the world of Hammer Productions.

Rounding out the set are Trailers and Image Gallery. There are two trailers both aped so fittingly by Edgar Wright in his faux trailer in Grindhouse DON’T. The image gallery is a collection of about 47 photos that automatically run and you cannot unfortunately control. Much of them are production stills but there are Lobby cards and Posters from around the world.

Scream Factory delivers another winner with The Devil Rides Out.  HIGHEST RECOMMENDATIONS!!!