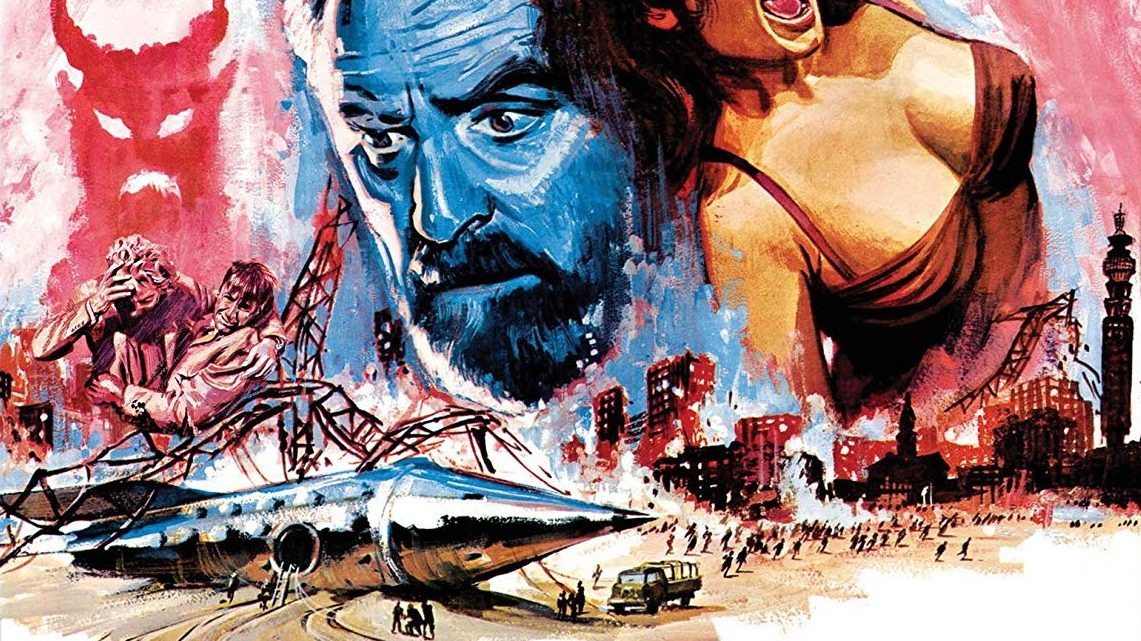 Where has Quatermass and the Pit been all of Adam’s life?  Buried until excavated by the fine folks at Scream Factory that have put out a truly great Blu-Ray with a wonderful transfer and extras

This reviewer was destined to love Quatermass and the Pit decades before watching it.  It was a late-night viewing of John Carpenter’s The Prince of Darkness that would seal it.  Though, it would not be until 2019 that this reviewer would realize it was the Hammer film that was Carpenter’s inspiration for his Horror meets Science hybrid.

While doing routine work on the London Underground workers find what appears to be an archaeological find.  That finds turns to be much more than just archaeological relics as they may have found something of possible extraterrestrial origin.  Professor Quatermass (played here by Andrew Keir taking over for Brian Donlevy) is brought in to preside over the dig and exploration.  What they find is something far more sinister than just extraterrestrial remains.  With the military not listening to him, the government wanting answers, and even his teammates with ulterior motives will Quatermass keep everyone safe.

The third in the Quatermass series produced by Hammer Films is possibly the best.  Screenwriter and Quatermass creator Nigel Kneale has created both a mystery and horror film built within the central conceit of the movie.  Quatermass and the Pit with its excavating of Aliens from millions of years prior is something that just about everyone that has worked in Science Fiction as a writer or director has done at one point.  The investigative mystery of the how’s and why’s of this anomaly is the bread and butter of this type of film.  Both Carpenter’s The Thing and Prince of Darkness adhere to this convention almost dogmatically (Carpenter was a huge Quatermass fan, so much so he used the name as a pseudonym on Prince of Darkness as screenwriter).   Kneale creates an effective central conceit that allows for further exploration, allowing the characters to go deeper and deeper into the mystery.

The transfer much like the one for an earlier Scream Factory release this year The Vengeance of She; the image is sharp but the grain is plentiful.  Many cineastes will love the look, including this one.  Buyers beware if you’re looking for an image that DNR’d away the grain this is not your transfer. This is much more organic.  It appears that this was sourced from an Older Master of unknown origin.  It’s a solid transfer none-the-less.

The new 7-minute interview with Actor Hugh Futcher, the actor discusses the casting process, working with Val Guest among other anecdotes.

The new 5-minute Interview with Special Effects Artist Brian Johnson picks up where Johnson’s previous interview on the Quartermass II special features left off.  The actor discusses how he got hired on Quatermass and the Pit rather than Quatermass II.

The new 8-minute Interview with Clapper Loader Trevor Coop where discusses how he began at a film lab and worked his way up through various Camera Departments eventually getting work on commercials and eventually crewing up with Focus Puller Robert Jordan which his first film was Quatermass and the Pitt.

This 18-minute interview with author Judith Kerr begins with a title card warning us that Kerr refers to Kneale as “Tom”.  From there, there are prompts that show us the interviewers questions.  Kerr, also an illustrator, discusses her relationship with Kneale (they were eventually married), her firsthand account of the production of the Quatermass series, and a host of other details including some great stories about Kneale and his process.

The archival 30-minute interview with Actor Julian Glover, whom many will know from Indiana Jones and the Last Crusade begins with discussing being offered the part rather than auditioning.  Much like the interview with Kerr, there is a title card that prompts what the interviewer’s question prompt was.  Glover discusses various thoughts on the original BBC mini-series, the production of the film, and his thoughts on the film itself, and an honest assessment of what he thinks of current sci-fi films and special effects.

This archival 20-minute interview with Actor/Writer Mark Gatiss.  The actor and writer known for his work on BBC’s most recent iteration of Sherlock Holmes (Sherlock) begins with where his love of Hammer Films, specifically the horror films they produced when he saw them as a child.  Gatiss gives a wonderful almost mini-commentary regarding Quatermass and the Pit and his personal experience with the film.  Again, like Kerr and Glover, this interview has title card prompts for the questions that the interviewer is asking.

The archival 11-minute interview with Filmmaker Joe Dante finds Dante always wily and cantankerous a delight as he discusses not only Quatermass and the Pit but Hammer Films in general as a company and their various other projects.  Dante, as many know, is a savant being able to recount many production anecdotes he was aware of.  Also his own memories of seeing the film.  Another interview where the questions appear as title cards throughout the interview.

The archival 31-minute interview with Author/Film Historian Kim Newman as many cineastes are aware is one of the premier genre Critics in the UK (and the world writ large).  Like his other interviews on various titles, Newman not only gives a detailed account of the production but gives us those great social histories and how Quatermass lines up in the context of UK Science Fiction and Science Fiction as a whole.  Another interview where the questions appear as title cards throughout the interview.

The archival 13-minute interview with author/Hammer Film Historian Marcus Hearn.  Hearn gives a detailed account of the development and making-of Quatermass and the Pit.  It cannot be overstated how on point the Hammer expert is on his subject.  There are fascinating anecdotes about not just the film but Hammer Films as a production entity, the recasting of Quatermass from Donlevy to Andrew Keir.  Hearn gives a great unfiltered account of what is an important film in Hammer Film’s library.

World Of Hammer – Sci-Fi, is a 26-minute episode of the BBC Produced TV Series.   Narrated by Oliver Reed this episode breaks down the Studios Science Fiction fare that includes the Quatermass films.  Like the previous one include on The Vengeance of She, it’s more clip show than documentary, fun time to be had by anyone who loves Hammer films.  Note: this appears to be the same feature that is on Quatermass II.

Rounding out the special features are Theatrical Trailers, TV Spots, Alternate U.S. Credits, and a Still Gallery.  The theatrical trailers amount to two 2.5-minute trailers.  Two 40-second TV Spots.  The Alternate Credits amount to the US Title Change of Five Million Years to Earth (when released by Fox at the time).  The still gallery amounts to approximately 75 stills of behind-the-scenes photos, lobby cards, Posters, and some Ad clippings the gallery runs automatically for about 6-minutes and can be paused but not navigated through.

Quatermass and the Pit is classic Science Fiction at its finest.  Scream Factory has pulled together a beautiful set of extras for the set.  Highest possible recommendations.