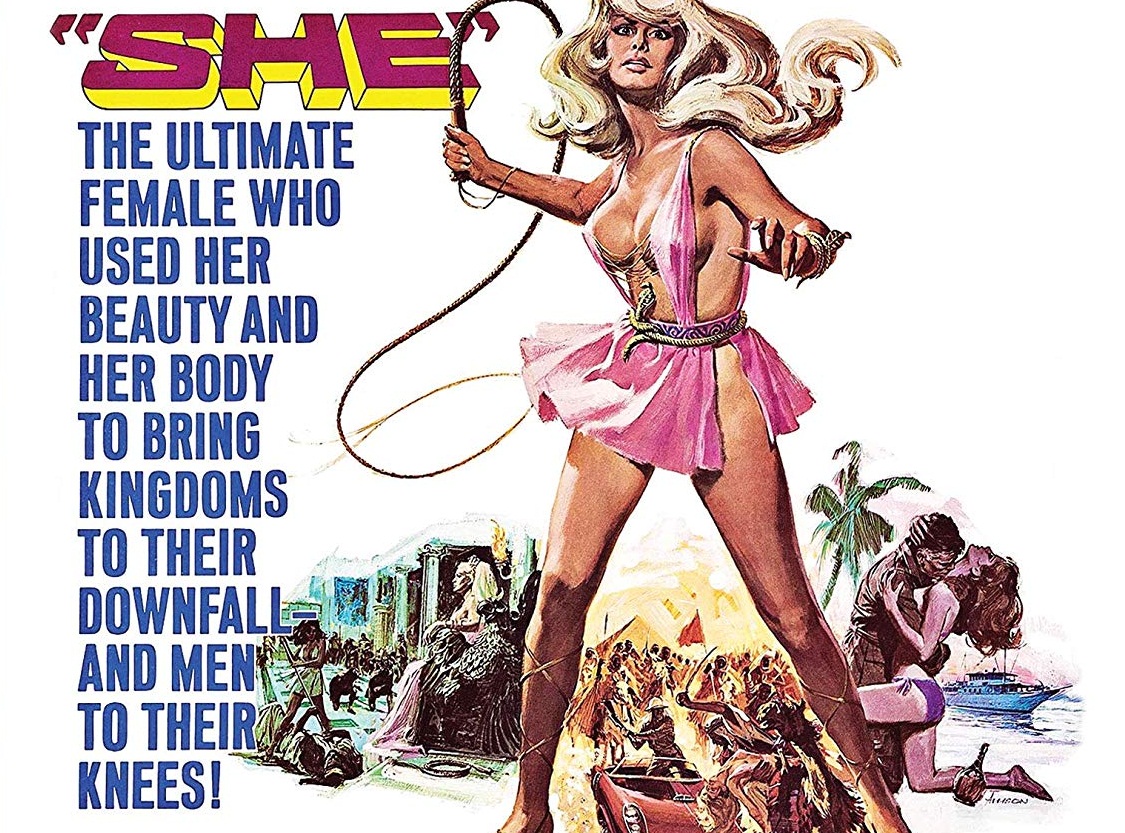 Adam is delighted by the lunacy that transpires in The Vengeance of She. The new Blu-Ray edition from Scream Factory of the Hammer sequel to their wildly popular sword and Sandal epic SHE comes loaded with special features and a great transfer.

Sometimes a sequel is so deranged and loopy you can help but fall in love with said film. That is Hammer’s sequel to their sword & Sandal epic She; The Vengeance of She. Setting the film in modern day adds a supernatural element so out of left field you will either reject or welcome it.

Set over two thousand years after the events of She. The character Ayesha played by Ursula Andress, long dead has been “reincarnated” in modern day, well early 1960’s, as Carol.  Carol played by the aptly named Olinka Berova is said to be the reincarnated Ayesha.  Now, wandering aimlessly or so it seems, across Italy Carol/Ayesha manages to board a boat with the hippest middle aged cats in all of the seas. We find that Carol IS being called by Killikrate (John Richardson) through visions. Why is the 2000 year old King calling her? To complete Carol’s awakening and reincarnation of the long dead Ayesha.

The film’s cast is okay, nothing from Berova, Richardson, or British stalwarts Edward Judd, Colin Blakely that would signify a truly wonderfully delicious performance. Though Andre Morell is great as Killikrate right hand man Kassim. The entire cast is serviceable albeit a bit stiff but that is the norm for this era of Hammer films.  Morell sees this as more than a simple paycheck and as he shows the only bit of life in the entire film.

The film is as entertaining as the original on what is a tenth of the budget. This is an instance of people being almost too creative with their budgetary issue solutions. If one knows the background to Ridley Scott’s proposed sequel to Gladiator, one will be right at home with the startling genre shift here. She was only marginally supernatural; The Vengeance of She is a full-on Supernatural Psycho-Sexual Thriller.

Ultimately, the stiff acting, dry direction, somber tone all contribute to make a truly special film. The Vengeance of She is special in the way true cult films are. It has no self-awareness of how stupid and looney it is. Even at its most ridiculous the film keeps its somber serious tone, only reinforcing the hilarity and entertainment valve of the entire enterprise.

The new 2K Scan of The Original Film Elements Hammer has provided is a verbose transfer that’s grain structure may surprise many. Those who have seen an archival print of an older film (specifically films from Britain) will be aware of the grain; though the image is sharp the grain is plentiful. Many cineastes will love the look, including this one.  Buyers beware if you’re looking for an image that DNR’d away the grain this is not your transfer. This is much more organic.

The commentary from the Podcast Monster Party is lively and goofy throughout. Though the group does a lot of mocking of the film it also does dispense historical info about the Production. This one is entertaining and informative throughout.

Terence Clegg – Assistant Director is a new 3-minute interview. The AD dishes the dirt on the production (including one of the male star’s diva behavior). Brief but all-together fun including a nice anecdote about shooting in Spain.

Joy Cuff – Visual Effects is a new 8-minute interview. The Visual Effect Designer discusses how she went from Kubrick’s 2001 to The Vengeance of She and how her work was primarily the final Temple. Cuff is great at discussing her model building process. Her critique of her work and FX work in general is spot on.

Trevor Coop – Clapper/Loader is a new 6-minute interview. Coop discusses, with a bit of dry wit, how he got the job. He too dishes some on set dirt about the stars and crew members.

The World of Hammer – Lands before Time is a 25-minute episode of the BBC produced TV series. Narrated by Oliver Reed this episode breaks down the various fantastical films produced by the iconic Studio including One Million B.C., She, Slave Girls among others. More of a clip show than documentary, it’s a fun time for anyone that loves Hammer.

Rounding out the extras are a Trailer, 3 TV Spots, and an Image Gallery.

The Vengeance of She will satisfy any Z-Grade movie junkie.  One does not even need to see the original.  Scream has done an excellent job of rounding up great extras and a beautiful transfer.  Recommended!!!!