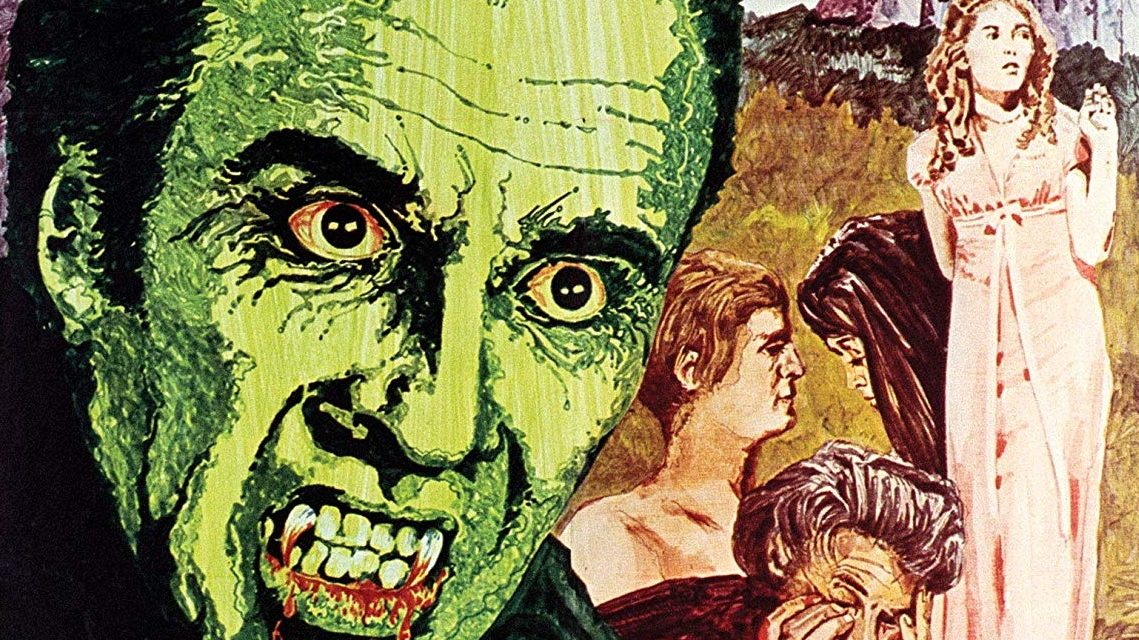 You never can keep a good Dracula down.  Christoper Lee returns as the infamous Vamp to face off against Not Rando-British Villagers (sadly, no Cushing as a side effect) in Scars of Dracula.  The Hammer Horror film gets a new Blu-Ray from the fine folks at Scream Factory.

Far too many films featuring the great Christopher Lee were unworthy of his talents.  Many of the films that he plays the Iconic Dracula included, which unfortunately for Scars of Dracula, with only a few minor items, is one of those unworthy films.

A “kinda-sorta” sequel to Dracula 1972 A.D. the film picks up right after Dracula’s (Lee) demise from that film.  He is saved by his ever-faithful servant even if the local townsfolk burn down, in part, his castle.  Undeterred, Dracula continues his sensual biting of young women even coming across another one of his betrothed.  Honestly, how many times is this guy going to run into a woman that’s a reincarnation of his beloved from centuries prior?  The answer is every damn Horror production of Dracula, is the answer.  With the help of some very Milk-Toastian British guys, Dracula is vanquished yet again.

From the terrible sets to the hilarious make-up effects, to the stilted acting stylings of everyone but Christopher Lee and Tom Baker (yes, that Baker of Dr. Who fame) everything is graced with a terrible sheen that cannot be done purposely.  Scars of Dracula isn’t just bad its issues come from the general malaise that seems to permeate throughout the film.  Director Roy Ward Baker (no relation to Tom Dr. Who) seems to be at wit’s end with making films with Hammer Productions.  Every decision he makes is not a creative one but one to “just get it in the can”.  As a result, everything feels rushed and lacking in any sort of artfully brash designed filmmaking that Hammer was known for.

The primary reason to see this film is the uncanny grace that Lee brings to the role, even in the lowest of budgeted settings.  Lee as Dracula could be a Ph.D. thesis on grace under fire.  Even when the man is stabbing one of his victims repeatedly with the phoniest of prop knives, Lee never falters.  If one could imagine having more respect for the British Spy turned Acting Legend, after the 90-minutes of Scars of Dracula, you will.

The transfer is presented in Two Aspect Ratios; 1.66:1 And 1.85:1.  The 1.66 is the original European AR.  The 1.85 was the American Theatrical ratio.  Note, the choice for the 1.66 is in the bonus features.  Everyone will want to go with the 1.85 as it appears there’s a tiny bit more information on the sides and it’s also the “main feature”.  The 1.66 is a great “added bonus” for those that are truly concerned with the OAR.  The transfer itself is a solid presentation of the film.  The color and grain structure are beautifully rendered giving the transfer a film-like quality.

The new one is by Historians Constantine Nasr and Randall Larson. Those that have listened to Nasr’s commentaries on Scream Factory’s release for The Leopard Man and directing the behind-the-scenes documentary on their release of The Body Snatcher will understand the kind of detail, dry wit, and general entertainment you’re in for. Beginning with Nasr beginning discussing the lack of the WB logo Nasr and Larson go into depth into how and why the film is so bad and cheaply produced. Note Larson, who is a Musical Score Expert, does not show up on the commentary until around the 64-minute mark. Larson’s comments are as detailed oriented review of the score and its purpose in the film.

One archival with Christopher Lee, Director Roy Ward Baker, and Historian Marcus Hearn (who appear to be recorded together). Lee is a delight as he recounts the history of playing Dracula and his frustrations with the lack of creativity of the team behind the making of the 5-films he played the famous vampire. Lee is the spotlight here recounting not just production anecdotes but some great tangential stories. This commentary is worth the price admission alone.

Blood Rites is an 18-minute making-of Documentary featurette. The doc suffers no fools in the discussing of how bad the production is and why it was so terrible and such a low-budget affair. Beginning with the discussion of how the budgets got lower after Warner Bros. and Hammer parted ways it only gets worse from there.  The effects, fake bats, the newly created Ratings in both the US and Britain, and actors not taking the production seriously are all detailed. Surprisingly effective at less than 20-minutes to be sure!

The theatrical trailers and is as unintentionally funny as the film. Fun it also includes the Horror of Frankenstein that was included on a double bill. The Still Gallery runs 10-minutes with no score but has over 130-stills that consist of production stills, lobby cards, Posters, ads/newspaper clippings, and other ephemera.

Scars of Dracula is a recommend for Completists and Hammer Horror fans.  Scream Factory has provided a beautiful transfer and a surprising depth of special features.