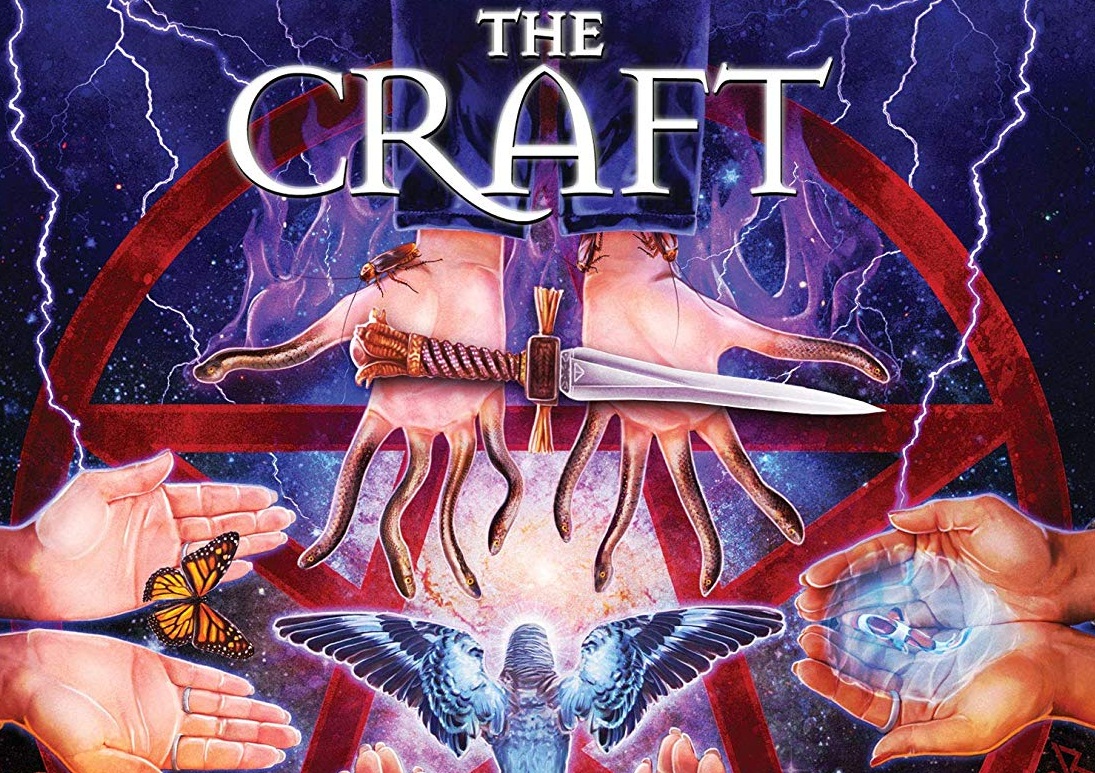 Adam looks at the Neo-Classic The Craft being released by Scream Factory in a loaded new Blu-Ray Collectors Edition. He calls it an All-Time Horror Classic, read his review to see why.

25-years later The Craft is still a high-water mark for studio produced female lead Horror films. Stars Fairuza Balk, Neve Campbell, Rachel True, and Robin Tunney do stellar work as a group of teenage outcasts that learn just how powerful they are as a group as they do when they are apart.

Sarah (Tunney) is the proverbial “new kid” at an L.A. private school. After douchebag Chris (Skeet Ulrich) lies about her to the school, she has no one to turn to then the “outcasts”. What she finds in Nancy (Balk), Bonnie (Campbell), and Rochelle (True) is not just friendship but that she may have powers beyond what she realized possible. As these young women begin to find “the craft” they also begin to unravel as friends. Sarah is forced to reckon with her new-found friends are not responsible with the powers they have and may want her dead.

Part of the power of The Craft is its parable of for not only High School but life in general. The issues that Sarah faces in the film are not just issues in High School but in life. Men being trash, infighting between friends, jealousy, stalkers can be applied during any time in a woman’s life, and infinitely relatable. That is the power of The Craft. It is not in its still great depiction of Witches and witchcraft but in the way that the film tells its story and choosing to focus on everyday problems that women of all ages face.

The quartet of women at the center of the film all excel in the film. Tunney, Balk, Campbell and True are all given moments to shine. Each actress takes their roles and pushes, through performance, to truly great work. Balk in particular is fantastic as the troubled Nancy. Her performance begins arched and bravely moves, slowly but surely, to a place so operatic you can’t help but applaud the sheer audacity of it. Watching the performance, you are struck by the fact that no one knew what to do with Balk or how to properly to put her amazing manic energy to work. The same could be said of Tunney, Campbell, and True. All do great individual work that should have given them varied work than what they were given. Campbell shows a side that no one has bee able to or wanted to, in your view, get this kind of complex work from the actress.

Co-writer/Director Andrew Fleming proves to be quite adept at handling both the teen drama and horror with equal skill and style. Above all Fleming respects the story and the women in this film. Yes, there is a moment with the young women walking in slow motion that could be taken as leering, but it’s done at a point in the film that feels designed to be more about power than sexuality. There is never a moment where a male intercedes to help Sarah, which could have been written in. Fleming makes sure that Sarah is her own hero in a story about women, which so often does NOT happen, and is quite powerful, even a quarter century on.

The Craft is still as special a film as it was when it was released in May of 1994. Special not just because of the themes and issues it tackles but because it simply put kicks all kinds of ass. Ask yourself how many studio-released films have women being badass witches and solving their own issues without the help of some man? The answer is none. Again, The Craft is a special film, it’s about time we start treating it as such. By we, I mean male critics. This one guys is one of the truly great horror films of not just the 90s but of all time.

The Transfer provided by Sony to Scream Factory is definitely not a new remaster like the recent Someone to Watch Over Me. This older Transfer appears to be from the DVD days. Its an acceptable transfer but it’s not going to turn heads the way that some of their more recent effects (see: Valentines and Man’s Best Friend). One wishes that Sony had provided Scream Factory with the Elements to do a great 2K or 4K remaster.

The commentary by Andrew Fleming is an archival one from the DVD special edition days. That does not mean its not worthy of your time. In fact, it is as Fleming discusses just about every topic you would want him to discuss. The origins of the project, themes, personal anecdotes from the set, casting, his work with special effects both makeup and CG.

Directing the Craft is a 15-minute interview with director and co-writer Andrew Fleming. Fleming is a interesting interview as he details his work on the project which began as rewriting of the script and the research he did. The interesting character traits came from real life incidentals in his life with women he had known. The director does dish a few interesting casting what-if’s (a certain super Star was almost cast in the Baulk character). His choosing to film in and around Silver Lake (eg West Hollywood). Shockingly Baulk was a practicing Wiccan at the time. How it got an R-rating which was not because of Language or Violence.

Producing the Craft is a 13-minute interview with Producer Douglas Wick. Beginning with his first film Working Girl, the producer discusses his attraction to Women who try to gain their own power. Among other tidbits he discusses casting, how hard it was to get the film off the ground, and the actual production and test screening process.

Writing The Craft is an 11-minute interview with screenwriter Peter Filcari. The screenwriter discusses the origins of the story that was developed by him and Producer Wick. His primary focus was the writing and development of the film and its cult status.

Effecting the Craft is an 11-minute interview with Tony Gardener who was the Makeup FX Supervisor. Beginning with a discussion of a cut Makeup effect to his discussion of the scarring on Neve Campbell. Of the new interview this is the most fascinating as he discusses the “nuts and bolts” of what it took to bring the film to the screen including the early era CG Effects.

Conjuring the Craft is a 24-minute vintage making-of featurette that focus not only on the production but the Witchcraft of The Craft. The both filmmaking and themes of the film are discussed with the technical respect to both aspects of the Witchcraft . The featurette nicely dovetails into the work and research they did to keep the reality of Wiccans and their ensuring of a respect within the film. But also works as a normal making-of with interviews with all the cast and crew. It’s a great featurette as it approaches the subject with respect and not tongue-in-cheek. Even the effects work is discussed as they how to relate to the witchcraft. They make great use of some solid b-roll footage.

The Making is The Craft is a vintage 5-minute EPK style making-of. Scream Factory has done it again. They’ve included the very fun and cheesy extended ad for the film. Anyone that loves these types of older making-of’s are going to enjoy this one.

The Deleted scenes amount to about 7-minutes and three scenes. These actually feel like they could have been included as they expand on characters. Including a moment that changes exactly who was responsible for Bonnie’s skin, why of the binding spell. They include a commentary by Fleming.

The trailer rounds out the features.

Scream Factory has done justice to The Craft one of the truly great horror films. Highest Recommendations!!!

Scream Factory’s Blu-Ray Collector’s Edition of The Craft is out March 12th!