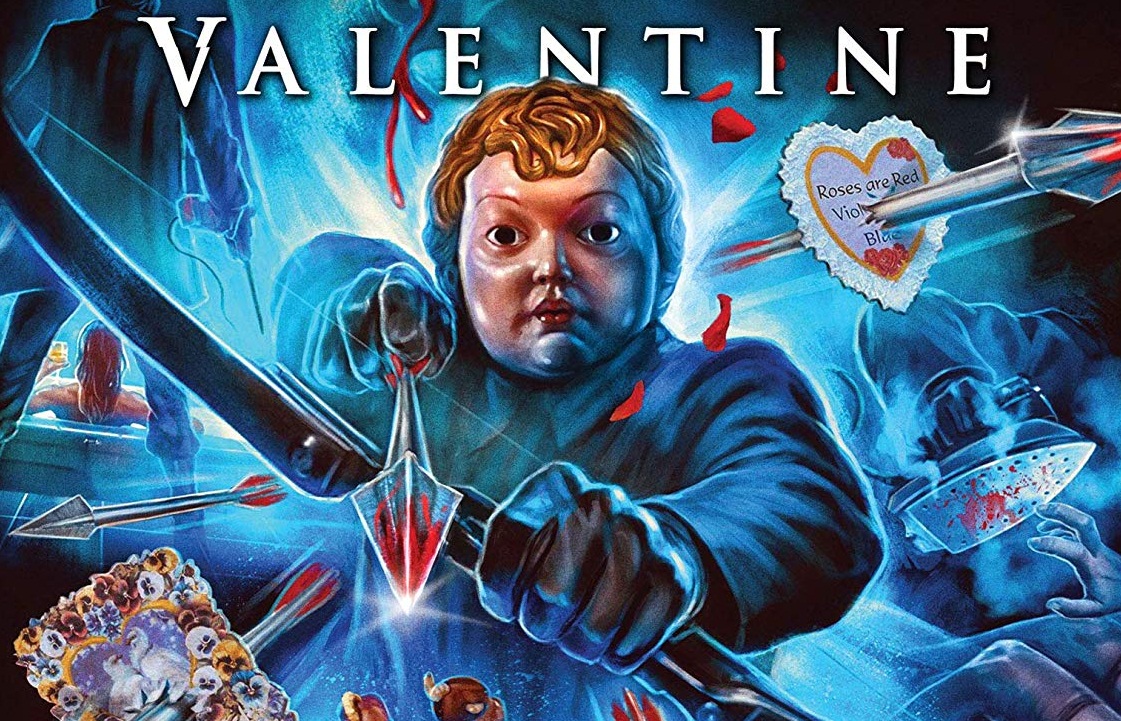 Adam discovers how great the forgotten slasher Valentine is.  The film from director Jamie Blanks starring David Boreanaz, Denise Richards, and Marley Shelton is being released by Scream Factory. The Blu-Ray is LOADED with extras and a shiny new 2K transfer.

One of the best aspects of Reviewing catalog titles on Blu-Ray is the discoveries you make. Jamie Blanks’ Valentine is one of those such discoveries. A 85% Horror & 15% comedy that works better than one would expect, with style to spare.

Valentine wastes no time in setting up its premise. A looser high school kid goes to a dance and in the matter of what seems like 5 minutes he is humiliated, bullied, and beaten to a bloody pulp. We cut to a decade later and a group of young women (Marley Shelton, Denise Richards, Jessica Capshaw, Jessica Cauffiel, and Katherine Heigl) are hunted down by a masked killer. It does not take long to figure out this is a revenge tale. But who is the killer stalking them?

Many who have not seen the film will be shocked at how good Denise Richards is. Shelton & Co do well but it is Richards that’s the stand out here. As Paige she is given the best lines, moments, and the iconic death of the film. Also, she is perfect in her moment with the police officer played by Fulvio Cecere. It’s a standout moment that would have changed her career if released in 2019.

Part of the charm of Valentine is its focus on its female characters and its treatment of its male characters. The script by Powers & Co. delights in showing just how terrible men are. Most will find these aspects of the film shockingly modern and forward thinking in our “woke era”.

They’ve definitely done a service to the film with a 2K scan of the original film elements.  Both director Jamie Blanks and Director of Photography Ric Bota supervised the transfer, it shows.  The image is flawless.  Late 90’s 35mm photography is quite possibly one of the Apex of the medium.  Valentine’s image is crisp and verbose.  Its primary color palette is red, a trick color to reproduce even in hi-def, here it’s beautifully reproduced without nary digital flaw.

There are two commentaries.  One archival from the original release which is a solo commentary from Blanks.  The newly recorded commentary is a group discussion with Blanks, author Peter Bracke, and Filmmaker Don Coscarelli.  The solo is decent technical based commentary.  The one to listen to is the lively discussion between Coscarelli, Bracke and Blanks.  The trio deep dive not only into the film but the production, the acting, casting, and even a bit of technical trivia (e.g. the film was shot with the Super35 format, and Blanks prefers the cropped 2.35 framing).  Well, worth your time.

Thrill of the Drill with Denise Richardsis a 10-minute interview with the actress. How she got the part and why she chose the film. Richards is a delight as she recounts various aspects of the film and her famous death scene.

The Final Girl with Marley Sheltonis a 14-minute interview with the lead actress. Shelton discusses her affection for Horror and how excited she was taking on the final girl role. The actress discusses how she got the role and auditioning with David Boreanez, the fun they had making the film and the relevance of a specific scene to 2019.

Shot through the Heart with Jessica Cauffielis a 23-minute interview with the actress who played Lily. The actress discusses how she got the role and how much she struggled before the role. The New York based actress recounts how much the film has followed her in the best way possible including her infamous death scene (which has made numerous horror-related top ten death scenes). Discussion of stunts and the cast members, director Jamie Blanks. Also, it’s relevance to me to in 2019.

Writing Valentine with Gretchen J. Berg & Aaron Harbertsis a 64-minute interview that’s a deep dive into their beginnings, getting an agent, working in both feature films and television, how they came into Valentine. How Scream really influenced Valentine (which anyone can see the mixture of horror and comedy). How the Beverly Hills 90210/Roswell writers took over from the Powers (Donna and Wayne) to create the film we see today. They recount just about everything you’d want to know about writing and also the production (some great anecdotes with writing a larger film and Producer Dylan Sellers shooting things down). They also discuss the original Ending and how the character Dorothy (Capshaw) changed and evolved. They also give credit to un-credited production writer Kate Kondell (Legally Blonde 2) they mention that did more drafts and the speed dating scene. The interview is very honest almost to a fault nothing like their recent Cobra release.

Editing Valentine with Steve Mirkovich is a 27-minute with the editor and how he came to become Jamie Blanks editor of choice (it has to do with his work with a Master of Horror). The legendary editor (just look at some of the iconic films he’s edited) discusses his hiring and work that he’s done and how it got to Valentine (Blanks hired him over the phone sight unseen). Mirkovich wastes no time as this is a “nuts and bolts” interview really getting into the detail of what he does as an editor and what an editor does as a whole. They also get him to discuss his craft in the modern era and how editing has changed since Valentine was release which is a refreshing perspective as we rarely get an editor’s point of view.

Scoring Valentine with Don Davisis a 12-minute interview with the composer. This Davis interview much like his House on Haunted Hill interview on that Scream Factory disc, is very technical. It’s great as Davis feels more like a teacher rather than an interviewee. Challenges to the production and the lack of money and how he solved those and creative issues. It’s fascinating interview that any score fans and just film geeks in general. He even gets into the mixing of the score. Bravo to Scream for getting this and Mirkovich and allowing them to be so technical in their discussion.

Behind-the-Scenes. Jamie Blanks has outdone himself again with this released. The feature running 1 hr and 54 minutes is as Scream Factory says at the beginning “the following clips were taken from more than 10 hours of behind the scenes video shot on the set of Valentine. The clips are presented in chronological order as the film was produced during principal photography. The video was shot in standard definition in a mix of 4:3 and 16:9 aspect ratios which are preserved here.” All that to say they killed it with this one. More or a living cinema vereté style making of. No narration other than people speaking to the screen. What you have is a fascinating way to look at a production and a more freewheeling way to create a making-of documentary. Blanks has become quite the purveyor is special edition content. This is THE SPECIAL FEATURE that you will want to watch.

Vintage Featuretteis an 8-minute EPK as the title suggests is directly from the early 2000’s. With appearances by Boreanez, Blanks, Shelton, Sellers, Grant Rosenberg, Richards and the like. This one is purely kitsch and entertainment.

Labeled as the Press Kit, it’s a 17-minute series of interview snippets from the various actors and director Jamie Blanks are involved. It’s the kind of stuff that you used see on E and your local entertainment report on your local channel. A little bonus is some B-Roll footage (which can also be found in the feature on the disc called Behind-the-Scenes).

Deleted Scenesis 9-minutes of various cut scenes (one with Virginia Madsen and John C McGinley). Much of the footage was rightfully cut as all of it is really inessential. Though there some of the deleted they had to cut down for violence to secure an R rating.

Rounding out the extras are the Orgy Music Video, Teaser, Trailer, 6 TV spots and a Photo Gallery. The Music Video appears it’s been remastered, the video is a collection of edited moments from the film. Fans will want to check out the Teaser as it is truly a teaser trailer specifically created for the cut scenes with no footage in it. The Trailer itself is very early ‘00’s along with the six TV Spots. The Photo Gallery is about 4-minutes long if left on automatic and about 50 stills that consist of production photos, lobby stills, press stills, posters and the like.

Valentine is a winner.  A truly great slasher film that ripe for rediscovery.  Thanks to Scream Factory and director Jamie Blanks they’ve filled this disc with amazing special features and a great transfer.  Not a surprise considering that Blanks worked with them on his film Urban Legend.  HIGHEST POSSIBLE RECOMMENDATIONS!!!