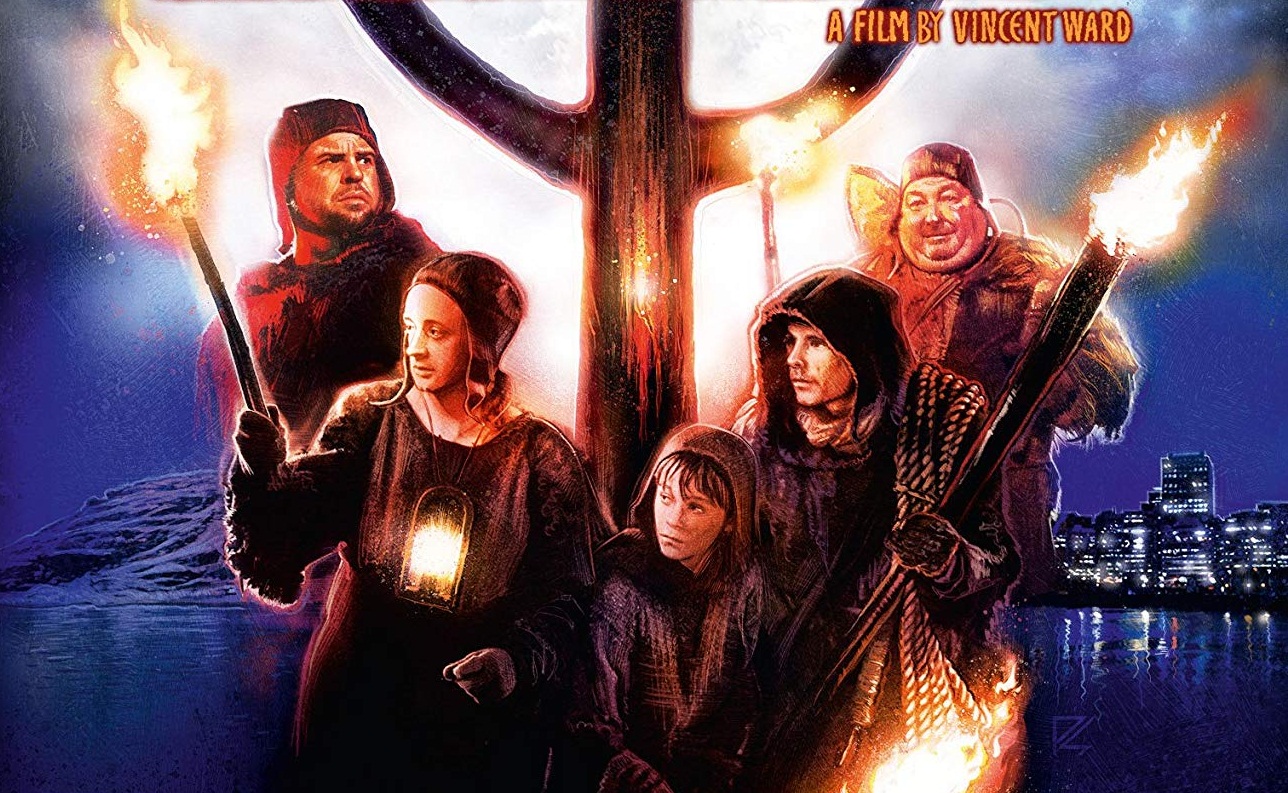 Adam finds much to love in the truly original science fiction fantasy adventure; The Navigator: A Medieval Odyssey.  The Vincent Ward film has been released by Arrow Video in a new Blu-Ray Edition.

When one watches The Navigator: A Medieval Odyssey one must wonder how Hollywood never truly figured out Vincent Ward.  In only his second film, Ward shows a capacity for unique awe and wonder that recalls both Terry Gilliam and prime-era Peter Jackson.  Ward’s film both bleak and hopeful almost defies logic and conventional storytelling for a magical realism that few have the power to pull off.

In the midst of the Dark Ages as the Plague has begun its chokehold in Europe a young boy Griffin (Hamish McFarlane) has a vision.  This vision could possibly save he and the inhabitants of his small Village.  A small band of men, including Griffin’s brother Connor (Bruce Lyons), led by Griffin’s visions journey to place a spire on the “largest Church in Christendom”.  With precious time left before the “Black Death” reaches their small shire Griffin and these men venture perilously into a world, they do not know.

There is so much more to this film than the above synopsis.  Part of the joys and pleasures of the story is seeing where Ward takes it.  As a writer and director, Ward has created a film that by turns is organically a science fiction tale and a fantasy adventure while being a historical drama.  Sometimes these combinations are all within the same breath.  The Navigator by using all these genres and their conventions but adroitly creates a heady brew and unique vision.  By bucking the trend in these genres of “explaining away” Ward keeps his gem of a film held together narratively.  Never once does the story calling into question the logic of its own narrative.

The script light on exposition in the traditional sense gives The Navigator its power.  Many films build their entire structure, especially science fiction and fantasy, on exposition dumps.  By not doing so much of what could have been clichéd moments of characters “explaining away” for comedic or even drama effect are not present. Ward is able to allow the characters to react and interact in a way free from the norms of the genre.  Here moments, when they come in contact with the unknown, are played with violence and horror.  These moments are challenges that these characters must face very real consequences.  Much of the film plays out smartly, vesting in both the character’s and the audience’s intelligence, not playing to the trite easy story moments.  The result is a film that constantly surprises one with its ability to tell its story in its own beautiful idiosyncratic methodology.

The Navigator will surprise those willing to take the risk.  For those few that have come for a revisit, you will find it as you left it.  A stirring singular adventure film, one filled with emotion and is as original as the day it was released.

Though not new, the transfer provided to Arrow for the release of The Navigator is beautiful.  The film shot in both Black & White and Color is razor sharp.  The Color cinematography is perfectly realized detail.  The Black & White photography’s black levels are near reference quality.  The transfer feels organically apart of a whole, no small feat considering both Color and Black & White transfers require very different skillsets. This is great work no matter the age or the type of transfer.

Nick Roddick on The Navigator: A Medieval Odyssey is a 9-minute interview with critic Nick Roddick which plays out as part interview and part visual essay.

Kaleidoscope: Vincent Ward is a 29-minute Made-For-TV documentary on Vincent Ward and the making of The Navigator.  This much like the similar featurettes on Smash Palace and Sleeping Dogs this is a great in-depth look at Ward as a director.  The documentary tracks Ward’s beginnings and his first feature Vigil through the release of The Navigator.  This is not a flashy EPK/Entertainment Tonight-style fluff piece but rather a serious and meaningful look at the director and his craft.

The care that Arrow Video is taking with the New Zealand New Wave on Blu-Ray is impressive.  The Navigator: A Medieval Odyssey is no different.  A distinct film, a beautiful transfer and thoughtful extras this Blu-Ray is a definite RECOMMENDED!!!

Arrow Video’s Blu-Ray of The Navigator: A Medieval Odyssey is out now