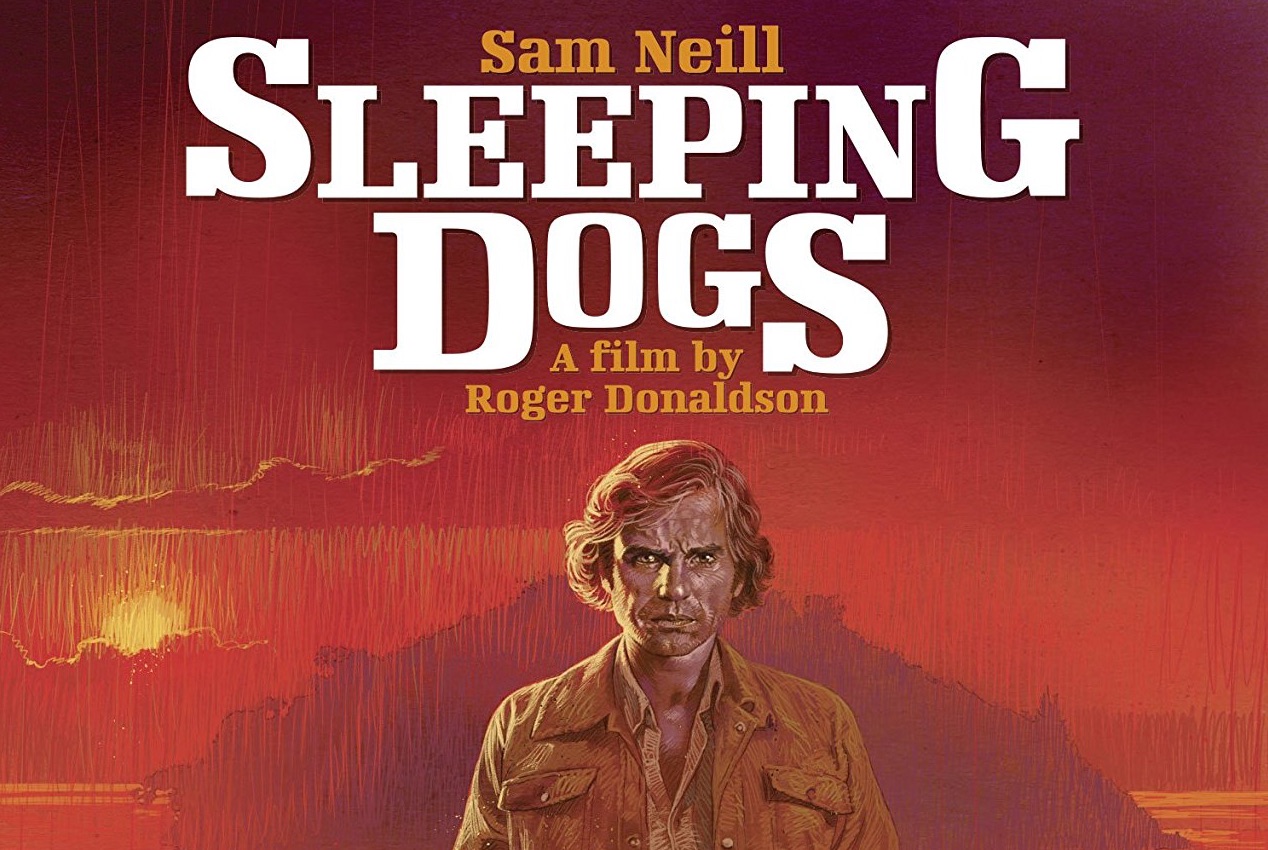 Adam takes a look at the brutal and brilliant political thriller Sleeping Dogs directed by Roger Donaldson and starring Sam Neill being released by Arrow Academy on Blu-Ray.

Roger Donaldson’s directorial debut feature Sleeping Dogs after four decades still retains all it’s bark and bite (yes, I went there).  The film is as an eviscerating indictment of government bureaucracy and revolutionaries as Battle for Algiers.  Donaldson smartly navigates the tricky waters of political thriller and exploitation action creating a potent hybrid.  A hybrid that is more akin to a Hitchcockian thriller.

The film begins as Smith (Sam Neill) has left his wife to begin a new life.  His wife has cheated on him with Bullen (Ian Mune, who also wrote the script). Wanting nothing more than to be left alone, Smith finds his own piece of paradise on an island owned by Maoris. As he begins to settle in, he is arrested as a political agitator of an ongoing oil strike.  Smith is as we clearly see is neither political nor an agitator. He simply wants to be left alone, rejecting the world writ large.  Slowly, Smith by powers out of his control becomes an unwilling pawn of both the government and the real political agitators.

The film makes it very clear the only side it is on is that of Smith’s.  Both sides are shown to be terrible and capable of inhumane actions.  Donaldson’s direction assures that you are always on Smith’s side, just wanting the man to be left in peace.  Neill is amazing as Smith.  The actor makes the brimming anger and frustration at every troublesome hand he is dealt fascinating and unique.  Neill in this early performance shows his deft range of emotions and the ability to make what is internal outwardly accessible to an audience.

Though it is Neill’s film, Warren Oates owns the screen in every scene he is in.  Playing Colonel Willoughby a US Military man brought in to assist with the “rabble” and clear them out. Oates and Neill in their scenes together are electric. Neither man giving an inch, nor taking an inch (acting-wise that is).  Willoughby is something out of a Peckinpah film, an outmoded man’s man in a foreign land clinging to antiquated ideals.  Their final back and forth is the heart of the piece.  Donaldson lets his actors devour the work and performances.  Is it overheated?  Possibly.  Pure undiluted powerful filmmaking?  Absolutely.

By the third act, the stones have been cast and the writing is on the wall.  Donald’s breakneck direction is what keeps the film as suspenseful as it is.  Donaldson and screenwriter Mune have crafted a Grade A Potboiler with crackling action scenes and superlative performances.  Sleeping Dogs isn’t only a watershed moment for New Zealand Cinema, its Cinema at its most powerful.

The transfer that Arrow has acquired is nearly flawless. The transfer, which appears to be the one that was released in New Zealand and Australia is beautiful with no signs of age or dirt. One would have a hard time figuring out this wasn’t a new 2K scan.

The commentary by Donaldson, Neill, and Mune is an informative relaxed chat between these three men who still appear to be good friends.  The men discuss all the various aspects of the filmmaking though there are a few moments of the dreaded repeat what’s on screen.  All together though the commentary is filled with specific details and anecdotes sure to satisfy anyone that listens.

The Making of Sleeping Dogs is a 65-minute making-of documentary made in 2004.  The documentary traces the development, production, and release of the film with all the major plays in the production including Neil, Donaldson.

The Making of Sleeping Dogs is the other 60-minute making-of documentary made during the filming of the film and released in 1977.  Though the 2004 doc has its charms, many will find the 1977 making-of fascinating from a “nuts and bolts” perspective of filmmaking and the style of the documentary itself.

It cannot be understated that Sleeping Dogs is an amazing piece of cinema worthy of any Cineaste’s physical media collection. Arrow Video has given this an amazing released filled with great extras and a near flawless transfer.  This is a top ten Blu-Ray title of the year.  HIGHEST POSSIBLE RECOMMENDATIONS!!!!!!!!!!