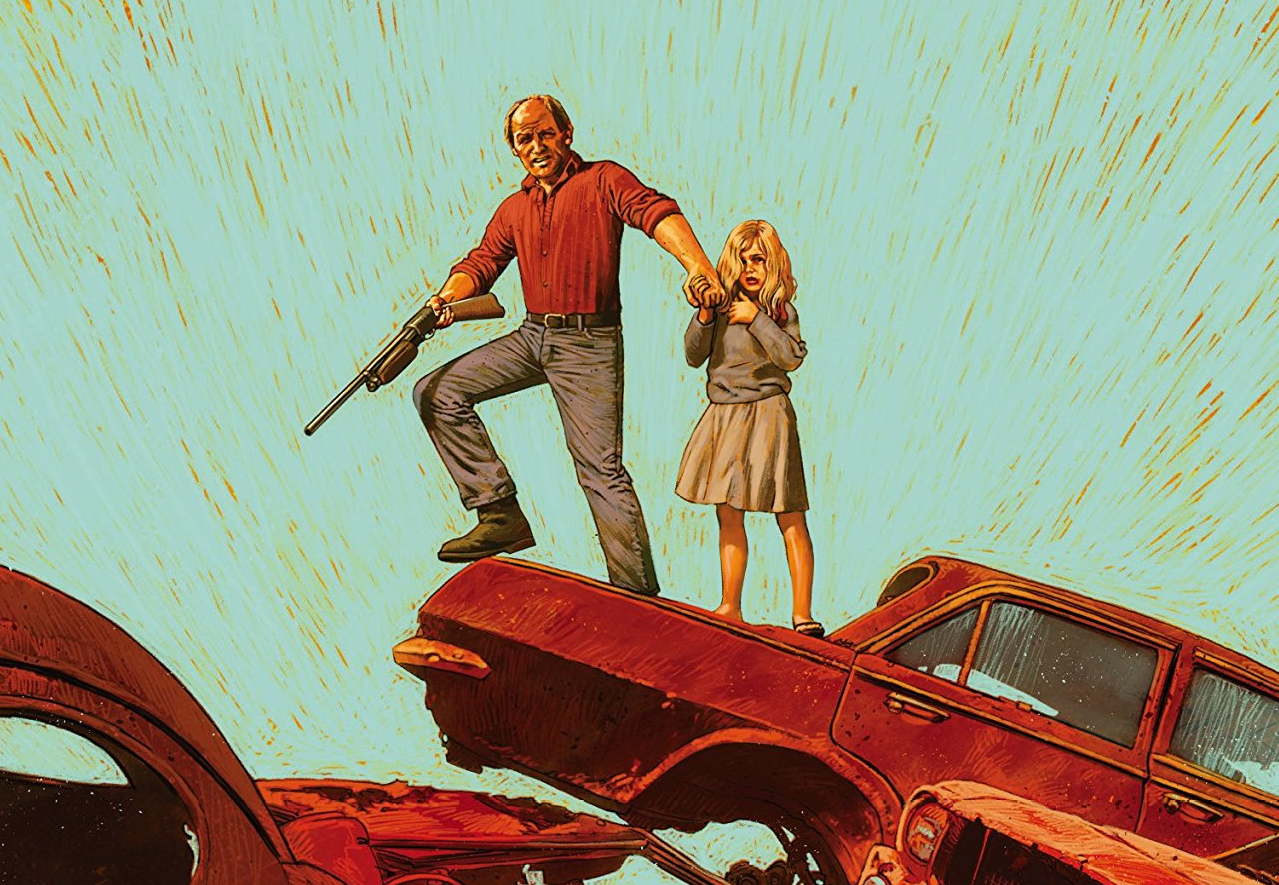 Adam finds a brilliant undiscovered (at least in the US) gem in Roger Donaldson’s second feature, Smash Palace.  The dark and searing drama is being released on Blu-Ray by Arrow Video.

Roger Donaldson’s one-two combo of Sleeping Dogs and Smash Palace are as a great debut and follow up feature from a writer/director has produced.  Smash Palace builds upon the director’s fascination with men thrown out of their own lives forced into extremities as their realities crack.  Anchored by a truly magnificent performance by Bruno Lawrence, Smash Palace is as searing a drama to come out of the 1980’s.

Al Shaw (Lawrence) has the perfect life in his estimation.  An F1 Racer, a father, a husband, owner, and proprietor of Smash Palace.  Smash Palace is a junkyard and auto shop.  Shaw and his single employee Tiny (Desmond Kelly) trade time between fixing Shaw’s race car and restoring junkers to their former glory albeit very slowly.  Though Shaw may think everything is right, they are not.  Shaw’s French wife Jacqui (Anna Maria Monticelli) sees they are raising their child in squalor.  Jacqui wants more than this less than provincial life for her and their child.  As tensions rise and Jacqui begins to take action, Shaw’s idyllic world and family begin to crumble.

Devastating is the most apt word to describe what Roger Donaldson has created.  The writer/director takes a tired story troupe of a family imploding and revitalizes it in an unlikely way.  Smash Palace is not Kramer vs. Kramer, the film is darker, violent, sinister. The themes of emasculation and masculinity play a larger role than in most of these types of films.  The way that Donaldson is able to take the film to more sinister territory is part of the film and his own brilliance.  The third act plays out to something more akin to First Blood or Taxi Driver that almost feels biblical in its dramaturgy.

Much of the success of the film rests on the shoulders of Bruno Lawrence.  The work that he does as Al Shaw is nothing short of brilliant.  Shaw is at turns pathetic, sad, humane, funny, scary, dangerous, and psychotic sometimes in the case of most of the second act, all at once. Donaldson and Lawrence create a character as indelible as anything that Scorsese and DeNiro’s collaborations bore. Like that duo, Donaldson and Lawrence understood that a performer and performance had to be empathetic and not necessarily sympathetic.  As a result, Smash Palace is as electrifying a film this reviewer has ever seen.

Smash Palace is the real deal.  A film that defies contentions and gives us something both humane and frightening. Much like its main character, Al Shaw, this is a film that you won’t be able to predict where it goes next.  It is dark human drama at its very best.

Much like its previous Donaldson release, Sleeping Dogs, Arrow has found a near flawless transfer of Smash Palace.  The film looks razor sharp on the disc with a great saturated picture.  There is a beautiful sheen of grain that gives the Blu-Ray that perfect “freshly made 35mm print”.

They Include the Following:

The commentary is a must-listen as Donaldson and stunt drive Steven Millen discuss the actual production and the intensive stunt work (there is quite a lot for those that have not seen the movie film). Like the Sleeping Dog’s commentary Donaldson is a wealth of both anecdotal and technical details about the production.

The Making of Smash Palace is a 50-minute documentary made in the early 2000’s featuring everyone from the production.  The documentary itself is a great companion piece to the commentary.  Everyone, but Bruno Lawrence, does contribute and we even get a cameo by everyone’s favorite New Zealand underrated director Geoff “Young Guns 2” Murphy!  The documentary definitely dives deep into the production and pulls no punches.  Many will want to watch this after they see the film and it does not disappoint.