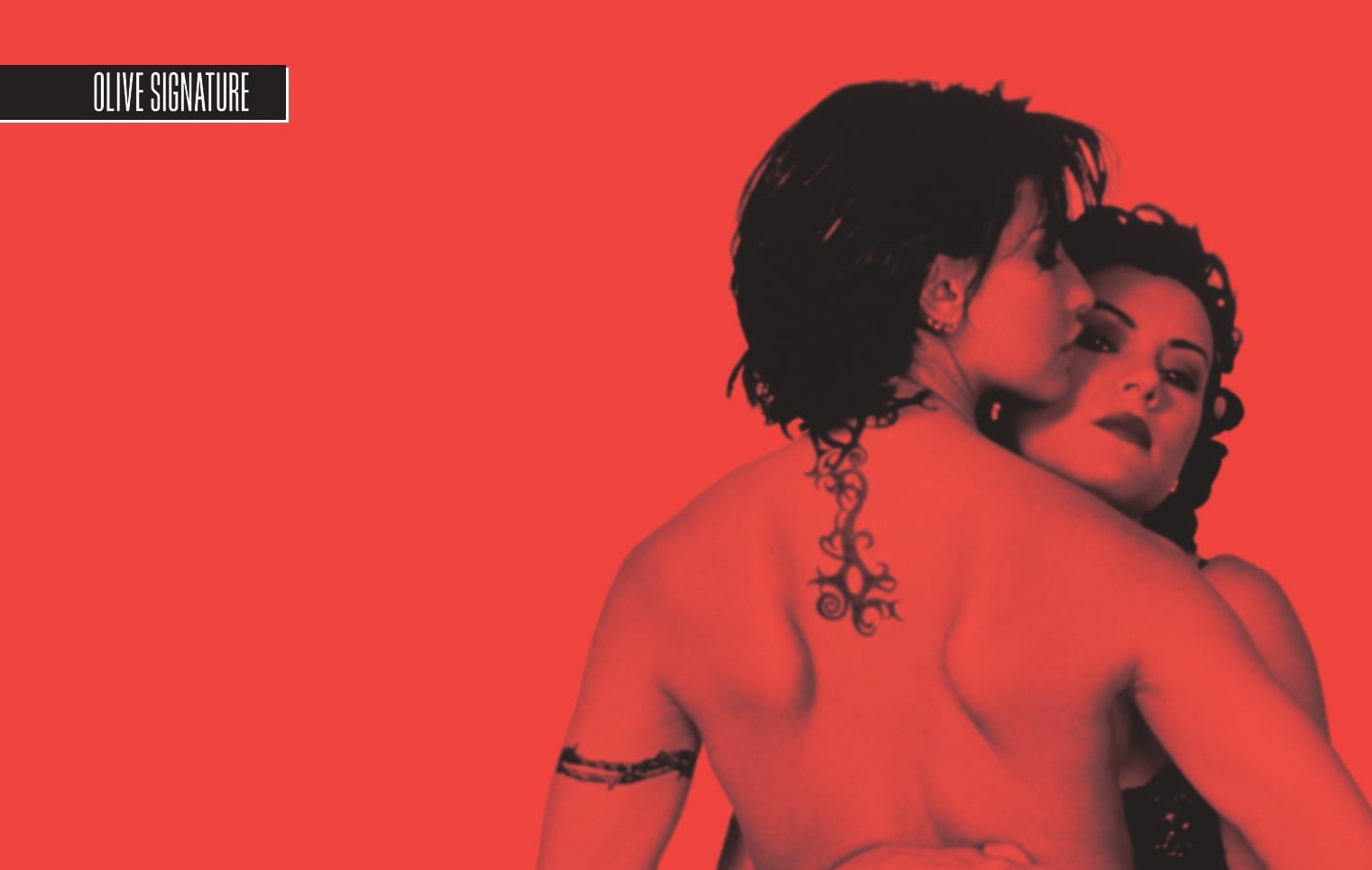 Adam is reaffirmed in his love for The Wachowski’s first film Bound.  Olive Signature has brought the LGBTQ Neo Noir to Blu-Ray in a feature filled edition with an amazing transfer.

Bound twists, turns and contorts the conventions of the femme fatales in film noir bending (never breaking) to its will and the LBGTQ framework it works within.  The debut feature from the Wachowskis is still a breath of fresh air in the way that the Coen’s Blood Simple is.

The film’s narrative is a classic film noir setup with a simple twist.  Corky (Gina Gershon) is recently released from prison.   To try to keep out of trouble, Corky finds work as a Painter and general Handy Person.  Corky immediately catches the eye of Gangster Moll Violet (Jennifer Tilly).  Thus begins a game of seduction that could end up with a bullet in Corky’s head for all the trouble.  Violet and Corky plan a double cross that will net them $2 million and leave Shelly (Joe Pantoliano) holding the bag (both figurative and literal).  As with all things in Noir, nothing goes according to plan.

There is a version of Bound a cheap Skinamax version of the story told with no intelligence or understanding of the material. This is not that version.  Everything within this film is refined, intelligent, and a stylish visual wit that recalls equal amounts Kubrick, and the Coen Brothers.  Within the confines of the narrative, Bound is a concisely perfect film. Acting, scripting, production design, costuming, score, makeup effects are all rendered perfectly within the vision of the Wachowski’s direction.  Few filmmakers have ever exerted the type of control they have in a single film, let alone their feature film debut.

The further and further we get away from Bound (it’s already been 22 years) it shines brighter and brighter that this is a Wachowski’s film.  Their gutsy narrative and style on full display in a way that instantly pushed them to the A-list (their next film was The Matrix).  Fun, funny, sexual, perverse, intelligent, witty and altogether entertaining, Bound is aimed to please.  Under that pop, confection belies a film about identity and identity in crisis.  Much of their work has been about this very fact and here it as purely delineated as it has ever been here.  The Wachowski’s may have gone on to more robust filmmaking but nothing was wickedly fun as Bound.

The New High-Definition digital restoration on the discs is beautiful.  It looks as though they took it from the same source as the Arrow UK Edition but did some cleanup work beyond the UK-Only Edition. The film is primarily indoors and in a lot of darker settings.  Olive’s disc put a system through its paces as the transfer sports some of the best Black Levels this reviewer has seen in a while.  The transfer is clear with a great reproduction of the muted color scheme the Wachowski’s and Bill Pope photographed.  In a word the transfer is beautiful.

NOTE: There are no differences between the quality of the RATED and UNRATED versions on the disc.  The comments above are noted for both.

Arrow has included both the RATED or UNRATED versions.  Many will choose the Unrated as it was the Film that the Wachowski’s wrote, planned and shot.  Note about the UNRATED version is that the two sex scenes that happen early in the film are where all of the “unrated content” occurs.  If one is easily offended you will want to say away from the UNRATED version, and possible both versions altogether.

The is the Unicorn of this set and what will be what many pick up this disc for is the archival commentary by The Wachowskis, Joe Pantoliano, Jennifer Tilly, Gina Gershon, Zach Staenberg, and technical consultant Susie Bright.  The group has a very lively chat where the Wachowski’s are definitely the center of the conversation discussing every aspect of the production including some great Dino De Laurentiis anecdotes, the development of the film, the production.  It’s a wealth of knowledge and time with the reclusive directors.

Part and parcel is a 7-minutes interview with title designer Patti Podsta who discusses her Career and how she got started moving from Interior Design and Architecture to title design.  It’s a fascinating and unique featurette with a crew member we normally do not featurettes devoted to, Title Designers.

The difference between you and me is an 18-minute Interview/Visual Essay about Neo-Noir and LBGTQ  references, and influences of Bound with Critical Film Studies Professor B. Ruby Rich and Gender Studies Professors Jen Moorman.  Both Moorman and Rich are able to give more of a historical context and visual guide through Bound’s references to Noir and to the LBGTQ society and how the film fits within it and it’s reverb through both communities.

Here’s Johnny is a 10-minute interview with Chris Meloni about this early role as Johnny the sociopathic son of the Crime Boss of Bound. Meloni discusses how he got the part and a few stories about the production including having to use a real toilet instead of a fake one for his iconic introduction.

Femme Fatales is a 26-minute featurette that details Gina Gershon and Jennifer Tilly experience during the casting, production, and release of the film. Both women are in fine form as they are honest and open about the process.  They even manage to name drop a few actors who were attached at certain points like Linda Hamilton, Rosanna Arquette, Peter Gallagher and Chris McDonald.  They also discuss the technical aspects of the sex scenes and a want of a sequel.

Modern Noir is a 29-minutes making-of through the eyes of longtime Wachowski collaborators Zach Strindberg, Don Davis, Bill Pope.  Through these three men, we get a glimpse into the preproduction, production, and release of Bound.  They discuss everything from the Wachowski’s being house painters in Chicago and came up with the premise on the job. How they each became involved with the project. This is all intercut with GREAT B ROLL FOOTAGE from the production. The featurette does a great job of showing how Bound connects to the history of The Matrix.

Bound is a crime classic that’s long been out of print.  Don’t hesitate to pick this one up.  With great special features, beautiful transfer this one comes with the HIGHEST POSSIBLE RECOMMENDATIONS!