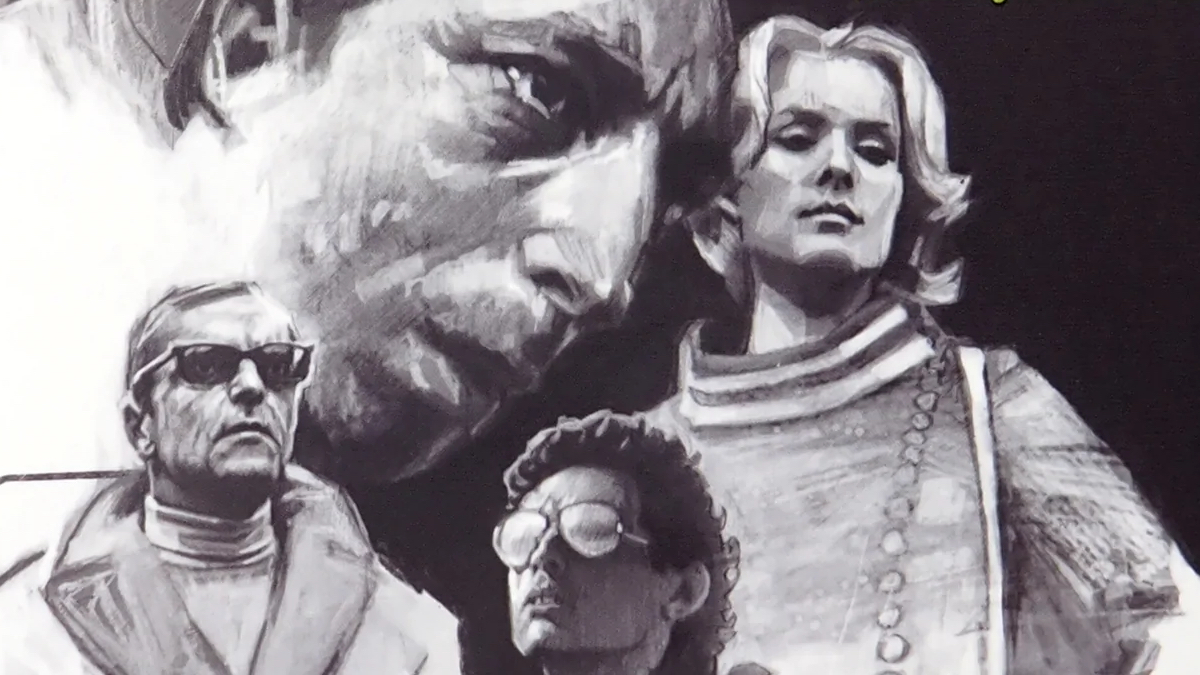 It cannot be understated just how stunning The Unknown Man of Shandigor is.  Deaf Crocodile has brought this little-seen but brilliant 60s Spy Thriller back to life on Blu-Ray with an impressive transfer and extras.

Part of the delight in diving into the curation that a label like Deaf Crocodile does is that when you’re vibing with their vibe … it’s a blissful relationship.  You’ll go with them anywhere and see what’s what.

Deaf Crocodile as a label feels like the early days of the Criterion Collection.  Not DVDs but Laserdiscs.  Yes, I am old enough to have saved all the money I made to purchase LDs from the Criterion Collection.  It was those days where you had to trust Criterion’s tastes when it came to something you’d never heard of that Deaf Crocodile invokes for this reviewer.  Like those early days of Criterion, the discs Deaf Crocodile releases aren’t merely a presentation of the best picture + sound quality possible.  The releases in their entirety – the presentation, the extras, the booklet –  is an Argument to the Reasons why a Title or Titles (in some cases)) belongs in your own personal “Film Cannon”.  Also, as important – why it belongs in the Film Cannon writ large.

Director Jean-Louis Roy’s labyrinthinely amusing and beautiful The Unknown Man of Shandigor is a prime example of the work they do.  An adroit and astute film that takes the conventions of a spy thriller – turns them on their head as they lean heavily into the troupes.  The resulting film is one that’s as sharp a spy thriller as one has seen with the cleverest of MacGuffins in its center but so strangely oblique in its allegiances and care for its characters.

No mere artistically minded genre exercise The Unknown Man of Shandigor leans heavily into the type of set pieces we’re used to but done with a French New Wave / 60s go-go pop flair.  It should not surprise anyone that Serge Gainsbourg shows up and even performs a song in the wildest of circumstances.  It’s the kind of film where anything can happen – and usually does.  One where one minute a man with an exploding suit is on the run from a Nazi turned American spy, to the next where two separated lovers are reunited in the middle of the Gaudi architecture of Barcelona.

One can very easily summarize the plot of The Unknown Man of Shandigor but to do so is to lose the very essence of what makes it special.  The plot is almost secondary to the themes, styles, artifice, and grandeur that is the sum of its parts.  Like any great artistic collage, Roy’s film must be taken as a whole, a few steps back to truly understand its slyly witty paranoia thesis that there is no one to root for in a Cold War.  No matter the object or goal.  No matter the players.  Everyone is doomed to be pawns to the greater cause.  No matter how much you want to believe in good.

Though Gainsbourg and his Bye Bye Mister Spy musical interlude certainly makes one want to root for him and his league of Bald Spies.  Don’t worry the sentence will make sense once you’ve taken in the glory that is The Unknown Man of Shandigor.

The New 4K Restoration from the original 35mm picture and sound elements by Cinémathèque suisse with additional digital restoration by Craig Rogers of Deaf Crocodile is flawless in every respect.  The gorgeous black and white photography by Roger Bimpage looks as though it was shot last week.  There is nary a stretch or speck of dirt present.  The image is sharp with perfectly balanced Contrast and Black Levels.  Though the “chef’s kiss” is the grain structure giving the film a beautiful patina that only film grain photochemically process is known to produce.  Bravo and hats off to Rogers and Cinémathèque suisse for their revelatory work here.

The all-new Commentary by film journalist Samm Deighan (Diabolique magazine, Daughters of Darkness podcast) begins with her excitement over getting to dissect this rarely seen film and the cinematic heady brew director Jean-Louis Roy has given to the Cold War Spy Thriller.  Some of the details include a discussion of Director Jean-Louis Roy – personal and professional historical account including his formative time in the burgeoning Swiss TV, the work of Serge Gainsborough – which is his debut feature and at the time was the rise of his international musical career, a discussion of Swiss Film Culture and Swiss identity– and how the Swiss making films in both French and German, Jean-Luc Goddard being Swiss but known as a French Filmmaker, a discussion of French New Wave and The Unknown Man of Shandigor, a kinship to the work Jacques Rivette – and a larger discussion of how Rivette’s work though apart of the New Wave but was on the outskirts of it, the commonalities between Rivette and Roy’s work and their ties to the French Silent Film serials, a discussion of the work and personal history of actor Marie-France Boyer – which includes a discussion of Eyes Without a Face and the “mad scientist” troupes, a discussion of the work and personal history of actor Daniel Emilfork, a crazy anecdote about Ben Courthers and a plan that Angela Bowie (first wife of David) had to bring a two Marvel Comic Book Characters into a TV series, a discussion of the writers that helped Roy create the film, the centerpiece of the film – musical number that Gainsbrough sung Goodbye Mr. Spy, an historical account of Gainsbrough’s personal and career – and his rise to stardom, the various tones and styles within the film that the film manages to take on but still feel apart of a whole piece, the weird parallels to torture used by the US Government at Guantanamo Bay and this film, the various spy movies at the time and the various forms and countries that took them on beyond James Bond, the work of Eddie Constantine – and historical account of his professional and personal life, the work of Pierre Chan – who shows up in the final third of the film, and much more.  Deighan continues her great work with Deaf Crocodile with this illuminating commentary track.  There isn’t a stone that’s left unturned – no surprise to anyone that’s listened to her tracks (listen to her great track for Zero Grad for further proof).  She gives so much context – social, political, historical, culturally, and artistically – to The Unknown Man of Shandigor is essential and vital listening.

Ultra-rare 1967 “making of” documentary from Swiss TV’s “Cinema VIF” show (29:15) – is as promised a making-of documentary about The Unknown Man of Shandigor.  Opening with director Jean-Louis Roy discussing the state of Swiss Cinema – critical and concise – that very much permeates the entire making of.  This documentary is a wonderful piece that shows how serious the art form cinema is/was in the 1960s in Europe.  This is no puff-piece EPK-style ad for the movie but rather a considered, thoughtful, insightful making-of that gives the filmmakers a platform to discuss with clarity and honesty what the film they were making was about. Featuring interviews with director Jean-Louis Roy, actors Daniel Emilfork, Jacques Dufilho, and Marie-France Boyer all discuss their involvement with the film with the kind of adroit thoughtfulness of artists being taken seriously, which is always a welcome insightful delight.  Though the real win here is the behind-the-scenes footage that runs throughout.  The “b-roll” footage was shot on 16mm and looks amazing.  For anyone that loves behind-the-scenes material, this is a goldmine because the quality is so refined and beautiful (leave it to the Swiss/French to take this kind of work as seriously as they did film). After watching this documentary one will no doubt ask. where can I see more Cinema VIF episodes (translated)!?! In Swiss and French with English subtitles.

Interview with Francoise Roy and Michel Schopfer (15:59) – filmed together this all-new interview with Francoise Roy, wife of director Jean-Louis Roy, and Michel Schopfer, first assistant director begin with how they respectively Roy, Schopfer notes that Roy and a shared love of Jerry Lewis is quite funny and touching.  Some of the other details include their account of the genesis of The Unknown Man of Shandigor, the development of the script, the origins of the song Bye Bye Mister Spy, the casting of the “bald men” in Gainsborough’s character’s “gang”, and much more.  Both Roy and Schopfer are not just filled with information but delightful interviews.  In Swiss and French with English subtitles.

New Booklet essay by filmmaker, punk musician and poet, and genre expert Chris D. (The Flesh Eaters; author of Outlaw Masters of Japanese Film).  Those that read my review of Radiance Films’ Big Time Gambling Boss will know Chris D.’s work though there it’s a Visual Essay on the film.  Here his new writing on The Unknown Man of Shandigor is as vital a compliment to the film as the Audio Commentary by Deighan is.

Deaf Crocodile does it again with the release of The Unknown Man from Shandigor this 60s Euro Spy Thriller is unlike any you’ve seen.  HIGHEST POSSIBLE RECOMMENDATIONS!!!