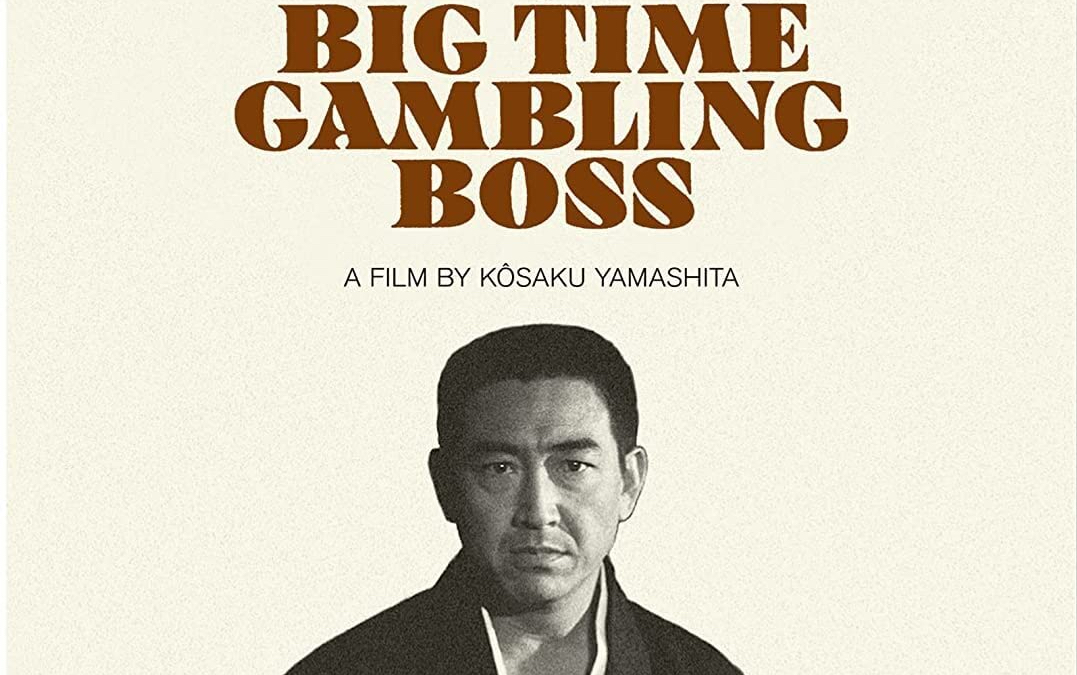 Big Time Gambling Boss is the sobering brutal Yakuza Thriller that you’ve been looking for.  Radiance comes out swinging with their US Blu-Ray debut title.

Some films hit you in the right way.  This reviewer was taken aback by how sharp and exacting Big Time Gambling Boss is in half the runtime that some of the epics of the genre can muster.  Director Kosaku Yamashita working with screenwriter Kazuo Kasahara create a twisted soberingly ruthless piece of criminal melodrama.

When a brain aneurysm takes out Yakuza Boss the succession for a new Boss begins.  Shinjiro Naka (Koji Tsuruta) thinks it should be his soon-to-be released from prison Boss Matsuda (Tomisaburo Wakayama).  This simple disagreement and the code of conduct spirals out of control into murders, betrayal, and testing of the very core of the Yakuza in pre-war 1930s Japan.

Running at a tight and compact 95-minutes Big Time Gambling Boss never lacks in its ability to surprise an audience with a gut punch of existentialism.  Whether it’s an assassination attempt on a father carrying his child on his back or the fate of a Boss’s wife, the film excels at a specific kind of brutality.  It isn’t one of excessive violence (or sexual abuse).  Kasahara’s film is an austere example of how, in the end, everyone must pay for their trespasses no matter their situation or code or gender, or innocence.

Big Time Gambling Boss isn’t the kind of film that ends happily, even in the cinematic Yakuza world the film is in an elite class of existentialism.  Though what separates it from even the elite class of Yakuza is its socio-political bent into historical events.  By its end, and the reveal of its morally – within the Yakuza hierarchy – compromised and giving us an even greater context of a nation in turmoil that would only go on to more significant strife.  Not just internally but against the world writ large.

It is no wonder that filmmaker Paul Schrader lauded the film or as he said, “it (is) the richest and most complex film of its type”.

The hi-def transfer supplied to Radiance by Toei is a verbose image with a beautiful patina of film grain. The transfer is sharp with wonderful color reproduction and is nearly free of any specks, dirt, or scratches.  For a debut Blu-Ray edition by a label, this sets the bar high, and one cannot wait to see more from the fledgling label.

Ninkyo 101 (14:35) – is an all-new video essay by Mark Schilling, author of The Yakuza Movie Book, which delves into the history and impact of the yakuza film.  Some of the details include the origins of the word Yakuza, how that word was implemented into organized crime in Japan, the hierarchy of the yakuza and how they associated with other working-class professions, famous Yakuzas, the rise of the Yakuza in pre-war Japan, the post-war Yakuza, Akira Kurosawa’s Drunken Angel as one of the first examples of post-war Yakuza, the various Yakuza series that began to rise after the war, Toei’s rise as the main producer of Yakuza films and their evolution from period pieces to modern-day Yakuza films, the rise of the Chivalry films, the stars and directors that rose out of the genre – including Kenji Fukasaku and Suzuki Sinjin, the fall of the genre, the rise of the new wave included Takashi Miike’s work and Takeshi Kitano’s work, and much more.  Shilling’s essay is great for anyone both novice and expert in the genre as a refresher and reminder of how wide and vast the genre was and still is.

Serial Gambling (25:24) – is an all-new video essay by Chris D., author of Gun and Sword: An Encyclopedia of Japanese Gangster Films 1955-1980, which delves into the development/production of Big Time Gambling Boss.  Some of the details include two different series The Gambling Den and The Gambler film series and their differences – both from Toei, an account of the making of the first three films in The Gambling Den series, a discussion of the first three of the Gambling Den series, how the fourth film, Big Time Gambling Boss, differs so differently than the series and how that was accomplished – the elevated nature of everything from scripting/direction/acting/action, the work of director Kosaku Yamashita – both here and in other films and a comparative of his contemporaries, and much more.

Image Gallery – consisting of 13 black and white and colored original promotional stills from the film’s release.

Radiance Films starts their label off – in the US – with a bang with Big Time Gambling Boss.  Highest Possible Recommendations!!!