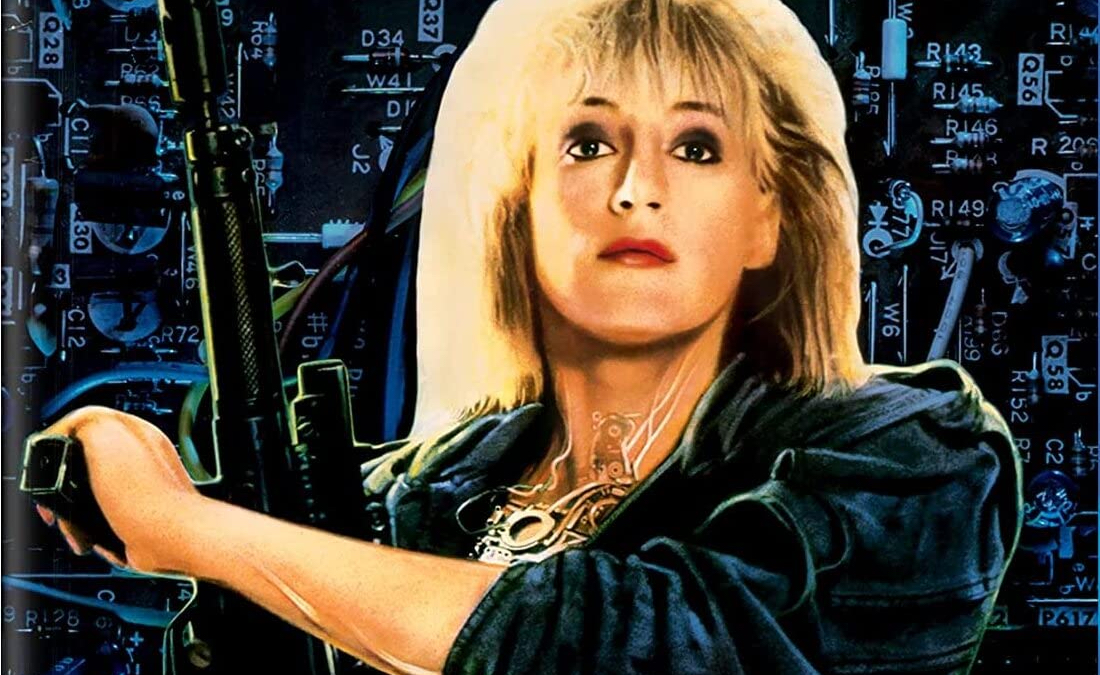 Move over T-800.  Step aside Robocop.  Sandhal Bergman is Programmed to Kill.  New to Blu-Ray from the mad scientists at Kino Lorber.

Sometimes films are just wonky enough and skewed in a way that makes them lovable genre exercises that wholesale rip off other more well-known similar genre entries.  It’s no mistake that Allan Holzman’s Programmed to Kill was initially named The Retaliator.  The “cyborg gone awry” troupes are so strong in this one that the name may have drawn comparisons they didn’t want.

Ex-CIA operative Eric Matthews (Robert Grinty) is drawn into a life-or-death hostage situation in Crete.  He successfully rescues the hostages and manages to capture one of the world’s deadliest terrorists in Samira (Sandhal Bergman).  What Matthews doesn’t know is that Samira was created by the CIA and a well-funded Science group.  Half human, half robot, all killer … Samira’s reprogramming doesn’t stick after the murder of the Terrorist Group’s Leader and her lover.  Vengeance is now her program and only Matthews can stop her or can he…

Holzman’s film is a fun bit of 90-minute reprocessed B-movie junk food.  Taking bits from here and bits from there, stitching them together into a Frankenstein monster of a movie works for Programmed to Kill.  Part of the delight and fun is how both Grinty and Bergman take everything super seriously and commit to every bit of the film.  Bergman is the best of the two.  Her physical performance here is a homage to the Bride (as in Bride of Frankenstein) as is it of her Conan co-star Arnold Schwarzenegger’s work in the Terminator Franchise (though only one was out at this point) and manages to work as an imposing lithe villain.

There are far worse Terminator copies out there than Programmed to Kill.  In fact, Holzman’s film is an efficiently lean action-filled thriller that will surprise fans of B-Movies.  Especially, those that are fans of the killer cyborg subgenre, which there are plenty of entries to choose from.  Though none have Sandhal Bergman screaming into a phone to kill a man on the other end of the line.

The all-new HD Master – From a 2K Scan of the 35mm Interpositive is a delight.  The verbose color reproduction is a standout here.  From shooting on location in Crete to the suburbs of the San Fernando Valley and the Malibu cast the sharp transfer always delivers a filmic-style image on Blu-Ray.  Bravo to Kino for providing a truly beautiful image for this little-seen Cult Classic.

In this all-new Audio Commentary by Director Allan Holzman, Moderated by Filmmaker Douglas Hosdale, they open with the “convoluted” process in which he got involved with the film and eventually got attached to Programmed to Kill.  Some of the details include how this was actually two movies merged into a single film, his beginning as an editor, the details of how he approached the editing together of the two films and how he pulled a story/plot, the reshoots/pickups that he did – which had a limited budget and a two-week schedule, working with Roger Corman as an editor, working for Fred Weintraub as an editor and eventually a director, an entire side conversation of his editing work that include Battle Beyond the Stars and other classic B-Movie genre films, working with Sandhal Bergman, working and getting assistance from production designer Rick Carter, the various changes to the industry that has happened since he did this film, a side conversation about meeting and working with Spielberg, the story behind the score and how Holzman brought it together, and much more.  Holzman and Hosdale provide a very fascinating commentary track.  In fact, no offense meant, but the track is much more fascinating than the film itself because of the horror of a production history and Holzman’s role in “salvaging” the two productions into a workable single film.

Kill or Be Killed: Interview with Screenwriter Robert Short (8:31) – this all-new interview with the screenwriter begins with how he got his start in FX work eventually leading to winning an Academy Award.  Some of the details include how he got involved with Bill Malone, which led to more FX work and eventually led to writing for Moshe Diamant, which led to the assignment work for this film Programmed to Kill, how he developed the script, and much more.

Alternate Opening Title Credit (0:23) – a brief clip of the original/alt title The Retaliator.

Sandhal Bergman is the bee’s knees in Programmed to Kill.  Kino Lorber has put together a great special edition package.  Recommended!