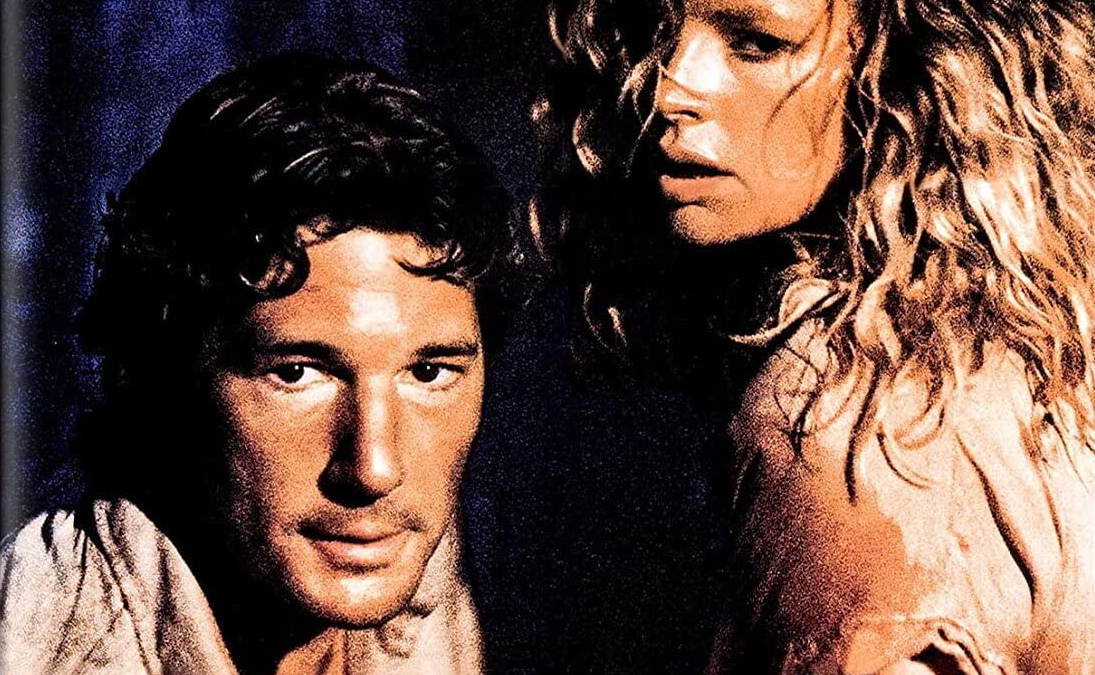 Kim Basinger and Richard Gere go on the run in the Bayou of New Orleans in No Mercy.  New on Blu-Ray from Kino Lorber.

Richard Pearce’s No Mercy is a solid bit of Action Revenge Thriller set in the blue-collar areas of Chicago and New Orleans.  Richard Gere and Kim Basinger are a hard-bitten duo forced to team up to survive the Epic Euro-sleaze of the amazing Jeroen Krabbé.

Chicago Cop Eddie Jillette (Gere) is out for vengeance when his partner (Gary Basaraba) is killed by a New Orleans crime boss Losado (Krabbé).  His only link to the murder is the beautiful and mysterious Michel (Basinger) who is tied to Losado somehow.  Jillette goes from the cold of Chicago to the sweaty swamps of New Orleans and gets more than he bargains for.  Literally cuffed at the wrist Jillette and Michelle must survive themselves before facing the ponytail-wearing, knife-loving Losado and his goons in a hotel in the French Quarter.

No Mercy’s biggest strength is its linear economically told story.  The film wastes none of its 106-minute run time.  At points, it feels like it’s going from set piece to set piece almost breathlessly without much care for the character.  It’s an adroit piece of writing – by screenwriter Jim Carabatsos – that ebbs and flows from moments of action and interludes of character moments albeit briefly.  Coupled with Pearce’s lean no-frills directorial style the film smooths the edges off the rougher sections of the film – mainly the romance.

Though, the romance is aided greatly by the chemistry that Gere and Basinger have on screen.  There’s a charge to everything that happens in the film.  They may not fall in love; the film is smart enough to know this – even with its tacked-on monologue ending.  The couple definitely falls in lust – something we rarely get nowadays in any film in any form.  Part of the magic of the film is that there is heat between the couple.

Basinger may have been given the short end of the “actor” stick this time but she’s the MVP of the duo.  Her work here is lovely in the support and heavy lifting she does to make Gere a romantic action hero.  All one needs to do is watch the way Bassinger approaches the Shack scene.  Her work there is so naturally unaffected and helps Gere in a way that most of these types of romances/lusting don’t benefit from.

Though the actor who steals the entire show is Jeroen Krabbé. Sporting a suede long duster, ponytail, and a switchblade – Krabbé is almost a dream-like cliché of what we’d come to know as the Euro-Villian. Only a few years away from its true rise with Alan Richman’s indelible Hans Gruber, Krabbé is the proto-version of that well-worn troupe of the late ’80s and ’90s. Make no mistake though, his Losado is an effective villain. So much so, that even in his absence his presence is felt. Also a huge assist by Basinger who makes the menace very real.

No Mercy for all its lustful leanings is an action film.  An action film in the last thirty minutes delivers in a great old-fashioned showdown in a run-down French Quarter Hotel.  Once Krabbé and Gere face off in a knife fight as the hotel burns down you can’t help but be in the bag for the melodrama of it all.

Complete with a fitting – if strange – happily ever after ending and Michael McDonald’s love song.  How quaintly and perfectly ‘80s.

Sony has provided an older – albeit a very good – transfer to Kino Lorber.  This may be a case of older transfer but done with newer compression software to produce a solid image – as was the case for their similar release of Blind Fury.  The image is solidly balanced, and sharp, with muted colors reproduction with a bit more digital noise than grain.  No Mercy looks as polished and beautiful on Blu-Ray as it has on home video.

Fire with Fire: Interview with Actor Jeroen Krabbé (11:21) – in this all-new the actor begins with a discussion about how he got into American movies after Verhoven’s Soldier of Orange, the lack of success initially, going back to Holland, making Verhoven’s The 4th Man, making Jumping Jack Flash – a wild story about it and how this turned into casting No Mercy, discussion – often hilariously – about the casting, director Pearce, costume design, the production – including a crazy reshoot ending, and much more.  Krabbé is an utter delight and an amazing storyteller.  Note: make sure to watch it all as Krabbé also gives us a great treat which I will not ruin.

No Mercy has it all; action, suspense, lusty attraction, swamps, crawdads, and hotel shootouts!  Kino Lorber has elevated its edition.  Recommended!