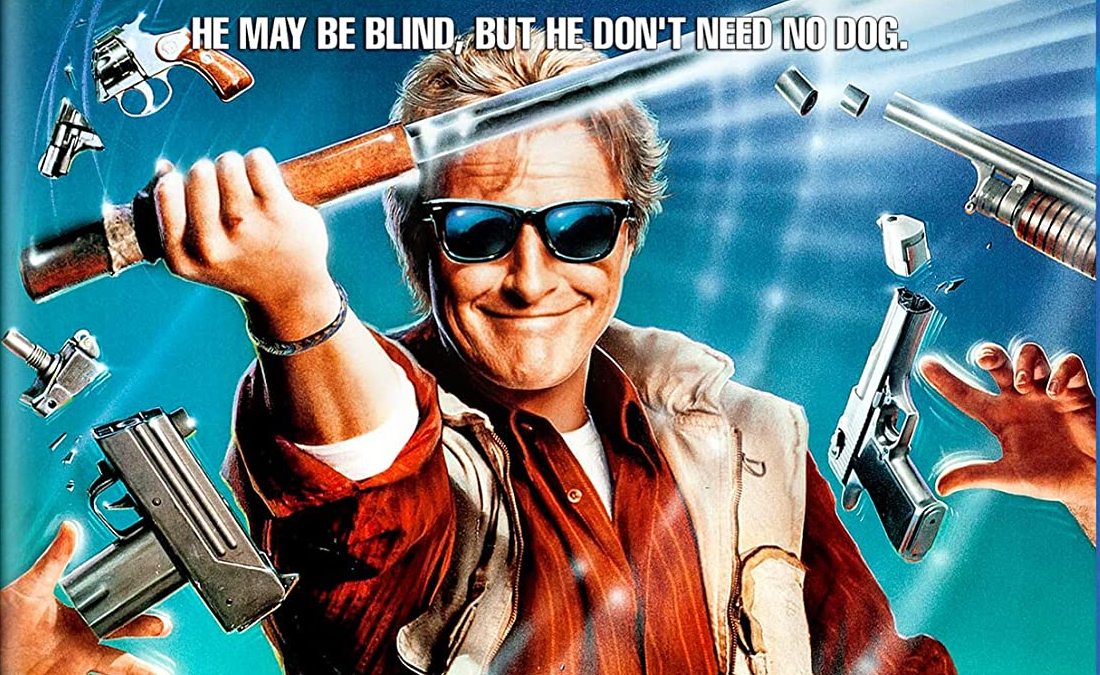 Rutger Hauer stars as an ex-Vietnam Vet turned Blind Swordsman in Phillip Noyce’s Blind Fury.  The Kino Lorber Blu-Ray edition is an upgrade in every sense of the word.

So, they never implicitly stated that Blind Fury is an Americanized Zatoichi, but it is.  Director Phillip Noyce takes a clean slice at the blade-welding hero with Rutger Hauer in the title role.  The results are as entertaining as an early ‘90s action film can be.

Nick Parker (Hauer) is blinded in Vietnam.  Having been saved by kindly Vietnamese villagers the man begins his new life as a blind man and swordsman.  Cut to 20 years later Parker attempts to find his best friend Frank (Terry O’Quinn billed as “Terrance” here… sorry excuse the informalities).  What he doesn’t know is that chemist and gambling addict Frank’s been hoodwinked and kidnaped by a Casino Owner (Noble Willingham) and part-time Drug Dealer.  Parker trying to visit Frank meets his estranged wife (Meg Foster) and his son Billy (Brandon Call) only to get in the middle of a kidnapping that ends in violence.  Parker on the run with Billy knows he’s the only chance that Frank has at surviving, and heads to Las Vegas to save him.

Look nothing is going to beat the perfection of Zatoichi as played by legend Shintaro Katsu.  That aside, Rutger Hauer is the perfect actor to take on the mantel for the English Language world circa 1990.  Hauer as Nick Parker is so delightfully charming and disarming that you not just root for him but wonder how he’ll escape or navigate a situation. Parker is part wandering soul and part avenging angel with nothing but the expectations that people will treat him with decency but the understanding they may not.

One of the best (and worst) troupes in an early ‘90s action film is the need to put a cutesy kid into the mix of a relatively hard-core action film.  Between the slicing and dicing of the film, there is said cliché thrown into the swirl in Billy played by Brandon Call in his first role.  Part of the charm of the entire film is that Call is better than most of these “cutesy kids” mainly because he’s not given anything to do that isn’t grounded.  The kid is a punk constantly testing Parker though they bond it feels organic.  It helps that his dueling partner (couldn’t resist the pun) is one of the best actors of his generation – in multiple languages.

Blind Fury could have been run of the mill killing bad guys but Noyce and casting director Junie Lowry populate the film with a who’s who of character actors in supporting roles.  Terry “Terrance” O’Quinn, Randall “Tex” Cobb, and Noble Willingham are at the top of the list.  Each brings their patented actorly acting to the enterprise.  In addition, you have Meg Foster, Lisa Blout, and Nick Cassavetes all taking minor roles and giving them the extra oomph needed to elevate the roles.  Though it’s the cameo appearance of THE NINJA HIMSELF – Shō Kosugi that takes the cake here.  One only would need to have cast Tracy Walter to make this cast more perfect.

Blind Fury ultimately lives and dies by its action.  Noyce much like his contemporary Martin Campbell knows exactly the right collaborators to create clean, stylish, and geographically accurate (something lost most recently in 99% of US/English language releases).  Noyce working with ace cinematographer and frequent Zemeckis collaborator Don Burgess, editor David A Simmons, Sword Fight Coordinator Steven Lambert, and Stunt Coordinator/2nd Unit Director Dick Ziker to create set pieces that are always fun, inventive, and tied to the story.  Whether it’s a chase and fight in a cornfield, taking down a cheating casino, or fighting in a blacked-out disco the film is designed to deliver.

The only problem with Blind Fury is there isn’t a 2 or 3 or 4 or 10 more of Hauer dispensing blind justice with FURY!!!

The transfer provided by Sony is a huge upgrade from previous editions.  Having both the original Sony DVD and the newer Mill Creek Blu-ray – and sampled them – there is no contest as Kino Lorber’s new version is night and day better.  It appears to be a new transfer – that or the compression is so bad on the MC disc – shines.  The sharp image shows no signs of artifacting or compression issues.  Color reproduction and contrast are also beautifully upgraded on this transfer.  All in all Kino Lorber has delivered another beautiful upgrade.  Bravo!!!

The all-new commentary by screenwriter Charles Robert Carner hosted by KL Producer Douglas Hosdale begins with how the Gymkata screenwriter got attached.  Some of the details include the Zatoichi movie they based their film on, the various version of the story they developed, his being fired multiple times during development, the difficulty in finding financing for the picture, how and who hired director Phillip Noyce, working with Hauer on set and developing the script, Carner being on set – a rarity especially at the time for a writer, Carner’s label as “special consultant” and what were his duties as that, the work of Randall ‘Tex’ Cobb and the other actors cast as villains, Hauer’s work with the sword and stunt choreographer, the way they developed action scenes so that a blind character could take on men with guns, the production being based out of Houston and Reno, a side conversation about working with Fred Weintraub on Gymkata, his work throughout the production including being involved in the post-production, working with Cobb and how he was on set and personally, Carner’s how he got started in the film industry, how they approached solving the issues of having to suspend the audience’s disbelief of a blind man taking on criminals, the post-production and release during a regime change and how that effected the movie, the life of the film post-release, his connections to Roger Ebert, hoe they achieved many of the stunts and set pieces in the finale, the importance of the sound design the battles Noyce had to fight, working with Sho Kasugi, and much more.  Hosdale keeps the commentary track lively and informative guiding Carner into some great discussion about this production.

Kino Lorber has given Blind Fury the upgrade it deserves.  Recommended!!!