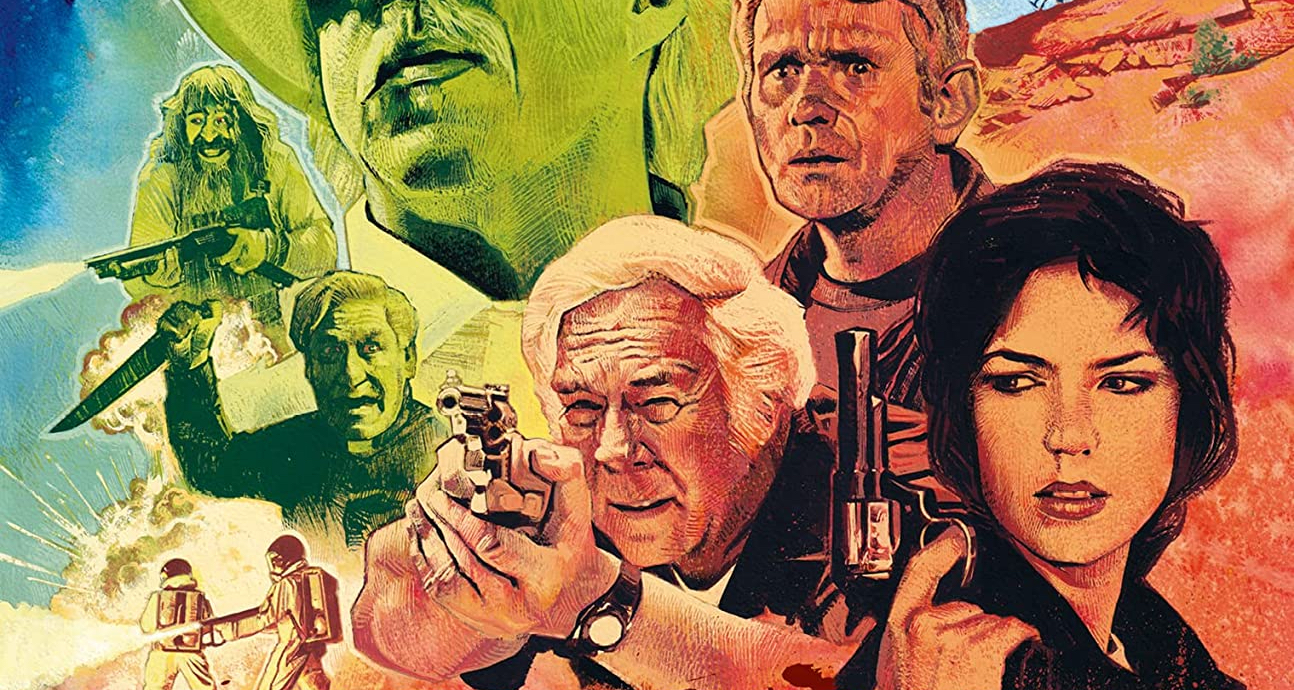 Nightmare at Noon is B-Movie Directing Legend Nico Mastorakis at his very best.  Arrow Video has provided a new transfer and extras.

Director Nico Mastorakis understands what separates a good B-Movies from a bad one.

This is never more applicable in Mastorakis’s career than his magnum opus… Nightmare at Noon.  Starring Wings Hauser, Bo Hopkins, George Kennedy, an albino Brion James, and a metric FUCKTON of dynamite is a recipe for awesomeness and badassery that you won’t soon forget.

What starts off as a bizarre love triangle between RV enthusiasts Ken (Hauser) and Cheri (Kimberly Beck) and Lone Wolf Leather Jacket Owner Riley (Hopkins) is quickly turned into an action horror film.  The sexy time love triangle is ruined by Brion James creeper who takes a green goo gun and shoots said green goo into the water supply of a small Utah Town.  It doesn’t take long for Ken, Cheri, and Riley to come in contact with the poisoned citizen of the small town.  Like crackhead zombies, these people are out to kill and destroy property.  Something that Sheriff Hanks (George Kennedy) won’t have any of.  It all comes to a head when Ken, Riley, and Hanks figure out that Brion James is behind all of it.  Queue the western-themed shootout in Monument Valley!!!!

All jokes aside Nightmare at Noon is in fact Mastorakis’s best work.  The action is crisp(y).  The story is lean and mean.  The performances are appropriately arched and stout.  Best of all the explosions are sweat-inducingly big.  Everything works perfectly and quickly in the lean and economical 96-minute run time.  Just long enough to not wear out its welcome or point out its narrative deficiencies.

With the exception of Quentin Tarantino, no one in the world would have guessed that we needed the triumphred of Wings Hauser, Bo Hopkins, and George Kennedy.  One watches these three guys work together and the professionalism and graciousness on-screen recalls the men-on-a-mission films that all three starred in previously.  Mastorakis understands the chemistry goldmine he has here and wastes no time with getting these three together and letting them play.  In fact, it’s what separates the film from similar films of the era.

By the Western Flavored showdown Nightmare at Noon will either be your jam or anything but.  For those that it is… they may have found their newest cult classic action film.

The all-new restoration from the original negative is a delight.  The film’s impressively shot and mounted with a flair for the visuals which in turn makes this new restoration all the more lively.  There isn’t a scratch or blemish to be found on this razor-sharp transfer.  The color reproduction and contrast levels are beautifully reproduced here.  The transfer looks as good as any freshly struck 35mm archival print.

The Films of Nico Mastorakis: Nightmare at Noon (33:15) – featurette on the making of the film with commentary from director Nico Mastorakis.  Like previous featurettes on other Mastorakis titles, this is a cleverly edited making-of that makes use of all the various EPK interviews, B-Roll Footage, and Mastorakis’ cheeky editing ticks via Final Cut Pro to produce something of a hybrid commentary.  The 33-minute featurette does a better job than any track that Mastorakis would have provided as it allows him a free-flowing association and give us a visual look behind the scenes of what he’s speaking of.  Things like the helicopter chase, the various action scenes in town, and the drive-in shoot-out, are all looked at in detail.  It’s not all fun and games as this featurette has some honest account of the production of this film – including issues with Wing Hauser.  Definitely a must-see for any fan of the film.

Behind-the-scenes footage (49:15) – another behind-the-scenes footage featurette edited by Mastorakis and company to produce a polished version and unique version of B-Roll footage.  Much like previous efforts on Arrow Discs, Mastorakis goes further than most filmmakers creating a unique piece in this extra feature that isn’t just cobbled together.  Mastorakis combines the on-set footage, with interviews at the time, with the finished product to produce something that gives you an understanding of what production is like.  It’s brilliant and what you expect once you’ve become a fan of Mastorakis’s films and their releases from Arrow Video.

On Set Interview – a submenu takes you to the individual interviews. It should be noted that it appears that someone put a weird Instagram-style feature on all the below interviews.  It’s not hugely distracting once you figure out that they’ve done something the manipulate the image.

Image Gallery (12:30) – the gallery consists of 150 images that can be paused but is meant to be played automatically the score – composed by Hans Zimmer in his early days – plays throughout.

Nightmare at Noon is a true-blue Cult Classic.  Arrow Video’s partnership with Nico Mastorakis continues to be fruitful.  Highly Recommended!!!