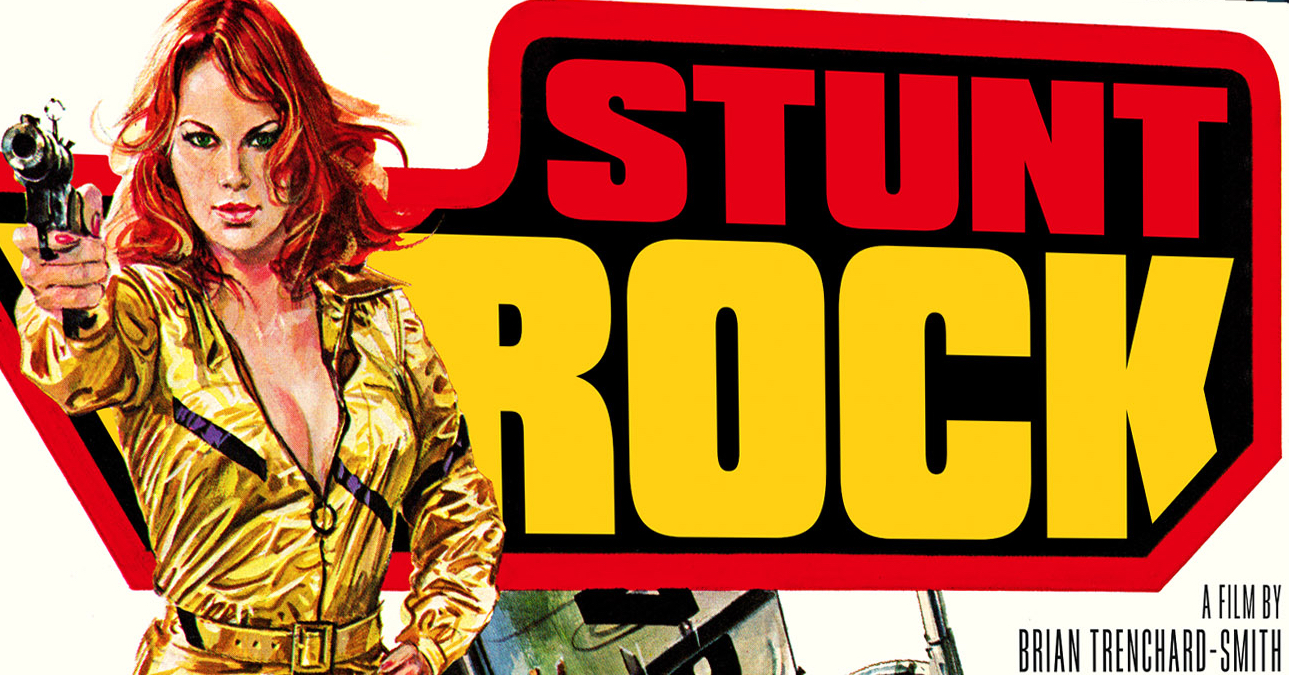 The one.  The only.  STUNT ROCK! Comes to Blu-Ray thanks to the mad geniuses at Kino Lorber WITH a beautiful 4K Restoration!!!

For those not in the know, one question does come up.

What the bloody hell is STUNT ROCK!

Like another film said once; Once cannot be told what STUNT ROCK! is they have to see for themselves.  Because even as I review this powder keg of kick ass you will still want to see it for yourself.

Part Documentary.  Part Concert Film.  Part Narrative Film.  All Badassery.  The film tells the story of Grant Page (Grant Page) and his trip to Hollywood as his brother’s band Sorcery (played by Sorcery) plays their one-of-a-kind Stunts-Magic-Rock N Roll spectacular to sold out crowds at the (in)Famous Forum.  While Page works stunts on a TV show starring fellow Aussie Monique van de Ven (Monique van de Ven) attracts her attention, as well as Reporter Lois (Margaret Trenchard-Smith).  Over the days of filming the Pilot with van de Ven, Page gives both women a look into the world of stunts and its history.

Oh, yeah, and lots of watching Sorcery do what they do best… MAGIC!!!

Brain Trenchard-Smith’s is a little bit of Hooper, a bit of Song Remains the Same, and a huge awesome bomb of some of the greatest Stunts you’ll see.  STUNT ROCK! should under no circumstances work yet, the film’s charms are greater than the sum of its parts.  Trenchard-Smith knows that the combination of delirious stunts and rock ‘n roll is the main attraction here and uses it as the glue to make everything in the narrative stick.  It helps the director knows exactly how to shoot both stunts and musical performances for maximum effect.

Complicit in all of this is one of the greatest Stunt Performers in the history of Stunt Performers; Grant Page.  Page known for his work on classics like Mad Max, Road Games, The Man from Hong Kong and more recently Max Mad: Fury Road is a Stuntie through and through.  Though separating him from a lot of Stuntmen, Page can act and does so with charm and wit in STUNT ROCK! playing a variation of himself.

If you are watching STUNT ROCK! for the acting and story… well, you’re absolutely in the wrong place.  The film delivers on both words of its title with the enthusiasm of an 8-year-old hopped up on candy that his grandma gave him.  The overwhelming sense of play, fun, and general mischief on display will make any action fiend or cineaste satisfied. Whether it’s showcasing a stunt that went wrong on the Dennis Hopper insanity Mad Dog Morgan that ended up in the film or the history of Stuntmen or showing a Wizard fight a Demon on stage while Sorcery plays STUNT ROCK! is always arched in its tone with tongue planted firmly in cheek.

STUNT ROCK! should come with a money-back satisfaction guarantee (it does not) for all those entering the theater about to be both stunted and rocked.  Trenchard-Smith’s film does exactly that with style and wit to spare.

The Brand New 4K Restoration is perfection.  The handsome sharp image is beautifully reflective of the 35mm/16mm origins of this docudrama hybrid.  There are a few minor specks and scratches on the image but those appear to be either because of the optical shots (there are a lot of split screens) or the “stock” footage they are using.  The image is bright, big, and pops with color … exactly what you expect from a film called STUNT ROCK! directed by Brian Trenchard-Smith.

The archival audio Commentary by Director Brian Trenchard-Smith with Actors Grant Page and Margaret Trenchard-Smith.  Director Trenchard-Smith opens with how the opening scene came about as he was filming a TV series.  Some of the details from the commentary include some of the bands that they were trying to get before Sorcery came onto the production, where the bandmembers Sorcery are and who they were at the time, how they stole certain shots in Los Angeles, Page makes his own custom vehicles, the Phil Hartman debut role, how and why Monique van de Ven, the terms of the budget from the financiers, the infamous burn jump backwards that is featured in the film and was done by Page, working with Sorcery (the band), film the actual concert footage and how that was accomplished, the editing of the film to make a 3 week deadline, how Trenchard-Smith built Page’s performance in the editing room and during production, the stunt work from Page’s perspective, fire stunts and how they’re accomplished, the personal relationship – how they met, during the production – of the Trenchard-Smith’s, why they didn’t create a “romance” between Page and Gerard, stealing shots in various countries around the world, and much more.  The trio gives a lively, fun, and funny commentary track.

The Ultimate Rush: Conversation with Brian and Margaret Trenchard-Smith (80:08) – this conversation/interview hosted by Justin King and filmed via Zoom begins with the Trenchard-Smith’s discussing their life in Oregon before they dive into their respective careers and specifically Stunt Rock.  Some of the details include the larger-than-life character that is Grant Page, how the financing came about and more detail about how the money came out of Holland, how Foreigner almost became the band of the film, how Trenchard-Smith found Sorcery literally over a weekend, the filming location used, how short Stunt Rock! shoot was, how Brian and Margaret’s short courtship and eventual marriage, how Trenchard-Smith went from the UK to Australia to become a director, the effect of Stunt Rock! after it wasn’t a box office success, the yellow dune buggy that features prominently in the film (and also Death Cheaters), working with a non-union crew (which was actually a union crew) and what that specifically meant, detail accounts of the various “unsanctioned” stunts/set pieces in various places that Page and Trenchard-Smith like the Hollywood Sign and the Empire State Building, the way that real for reel stunt work cannot compare to CG based imagery, and much more.

NOT QUITE HOLLYWOOD Interview with Brian Trenchard-Smith (14:06) – pulled from Mark Hartley’s great documentary Not Quite Hollywood.  In the interview, BTS talks about Grant Page as a personality and stunt performer, how BTS worked with Page on everything, how and why Stunt Rock was created, the work that Page got out of Stunt Rock, how trailers were a creative touchstone for the style of the film, and much more.  If one has seen the documentary one will be familiar with some of this interview but there’s a lot of it that’s extended from the doc or not even there.

NOT QUITE HOLLYWOOD Interview with Lead Actor/Stuntman Grant Page (3:22) – pulled from Mark Hartley’s great documentary Not Quite Hollywood.  The legendary stunt man and star of Stunt Rock discusses how he got involved, how Sorcery was picked over more popular bands (even at the time), and more. If one has seen the documentary one will be familiar with some of this interview but there’s a lot of it that’s extended from the doc or not even there.

2009 Interview with Brian Trenchard-Smith, Sorcery Lead Guitarist Smokey Huff, Actor Richard Blackburn, and Producer Marty Fink (68:34) – The Trenchard-Smith interview covers similar ground as his commentary, and two other interviews on the disc but there is some detail that those do not have especially about his youth, interest in stunt work, and his work on TV and more.  Producer Marty Fink discusses working on previous work and additionally what makes working with Trenchard-Smith so special and more.  Actor Richard Blackburn discusses his work as “The Agent” in Stunt Rock!, his post-Stunt Rock! career and more.  Musician Smokey Huff is by far the most interesting – he’s also takes up most of the interview, which is great – as he discusses the behind-the-scene magic behind the stage show, the music, and its production, working with Grant Page – with some great current era anecdotes about the legendary stunt man, working with Monique van de Ven, and some great anecdotes about the band’s origins and post-Stunt Rock!.

Select Songs From the Soundtrack (First Time in Stereo) – each song is its own special feature.  When played a graphic comes up from the original vinyl cover and a brief piece of information about the band/song.  Each track does mention that the full soundtrack will be released digitally on 6/10/22 and on Vinyl sometime in 2023.

Stunt Rock finally has a worthy edition of its awesomeness.  Kino has stacked this with great special features and a beautiful transfer. Highly Possible Recommendations!!!