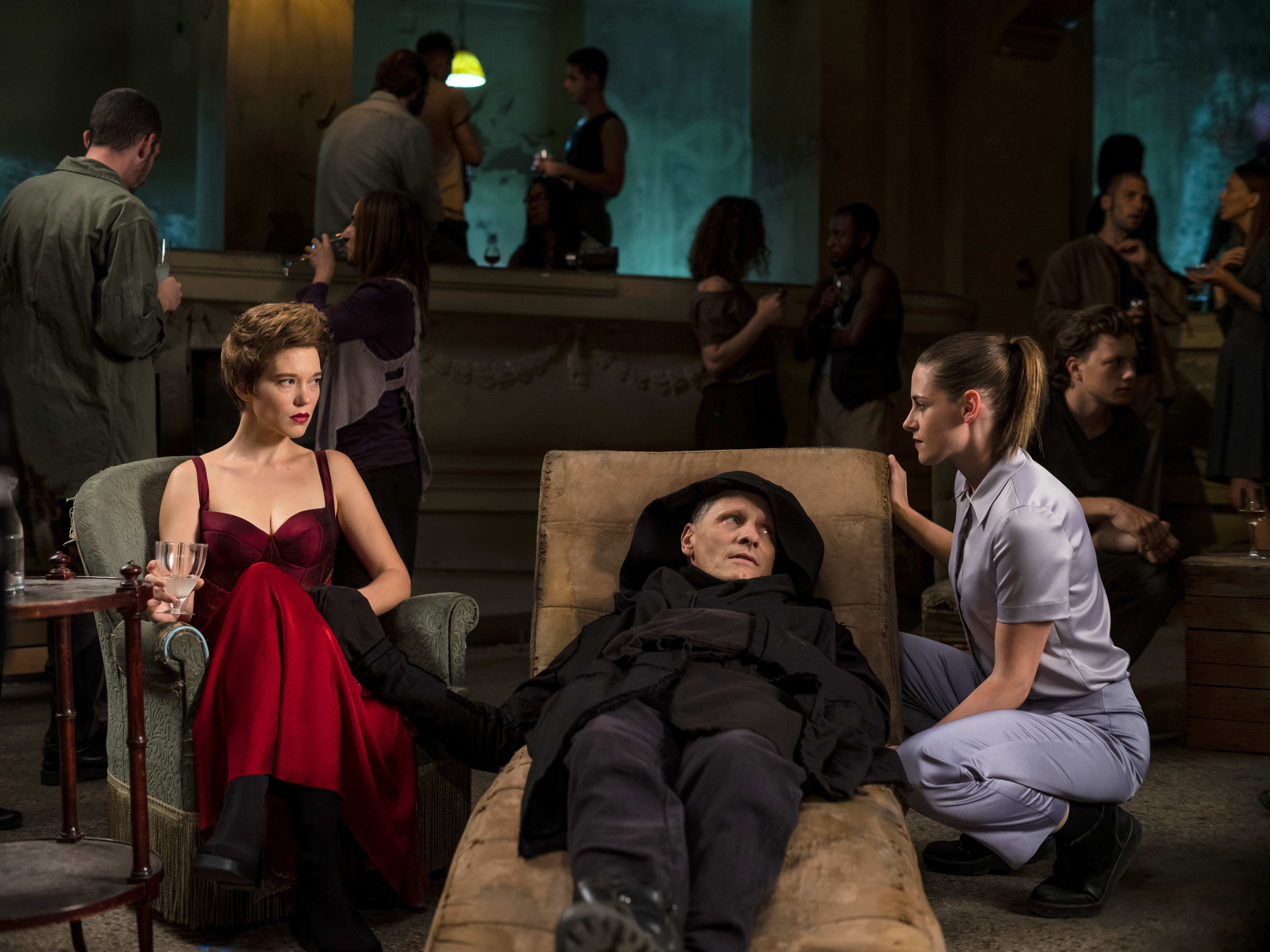 Evolution.  Art.  Politics.  All swirl and comingle in David Cronenberg’s Crimes of the Future.

A long-gestating project for writer/director David Cronenberg finds him balancing the playful and austere.  Bringing the likes of Viggo Mortensen, Léa Seydoux, and Kristen Stewart into this return to body horror.

In the near future, humans have lost their sense of pain as well as have begun to grow new internal organs.  Called “Accelerated Evolution Syndrome”, governments already view it with fearful eyes.  Registration and tracking have begun, and radicalization has begun to permeate through the lower class as the rich do what the rich want.  This is all for naught in the world of Artist Saul Tenser (Mortensen).  With his fellow artist and former surgeon Caprice (Seydoux), Tenser has begun what Videodrome only hinted at with the hailing of “the new flesh”.  Tenser and Caprice create one-of-a-kind art shows with the removal of his organs.  But at what cost to Tenser who is constantly sick?  As Tenser begins to find there is more to his newly forming organs, we find that there is more to Tenser than just an artist whose canvas is his whole body…

Make no mistake, this film is designed to unease everyone.  Cronenberg’s film is a slow burn descent into the fear of change and a changing body.  The director’s panache for unflinching camera and visuals has not lost any of its bite or provocation.  One would say that it’s been pushed artfully further with a full-on autopsy on a child that many will watch with jaw agape.  With good reason and purpose.

The director has never created an image without context and theme to back that imagery, especially the transcendent ones.  As he talked about “online personas” and the radicalization of the internet forty years ago… Cronenberg is talking about the effect that all technology has had on our bodies and our bodies’ response to it.  That notion, the fears, the oversight, and the fascist reactions to the unknown of the body morphing and evolving is in every frame of this calculating work.

One of the joys of Crimes of the Future is that for all intents and purposes feel like a true spiritual successor to Videodrome and eXistenZ.  One does not need to see either to grasp Cronenberg’s newest.  Though the ideas and themes Cronenberg has played with are explored for our modern era as they were in the ’80s (with Videodrome) and the early ’00s (with eXistenZ).

The evolution of the themes and where Cronenberg takes us with Crimes of the Future are horrifying and fascinating. Fascinating by the proposed accuracy of how we would evolve.  Horrifying as Cronenberg knows the exact and accurate response the human race would have to these sorts of bodily growth and evolution.

Crimes of the Future shows us a filmmaker that has only grown sharper and has lost none of his bite with age.  Like a fine wine, David Cronenberg continues to age perfectly.