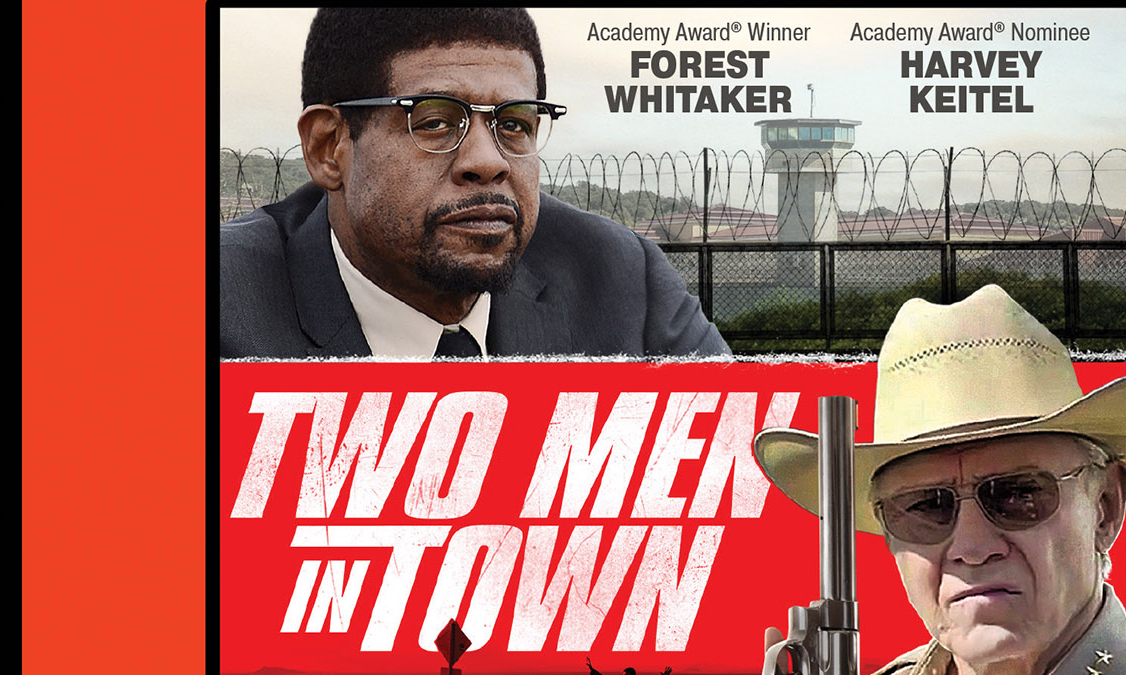 Two Men in Town is a vital piece of cinema and a look at some of the more pressing issues in America.  Cohen Media Group has brought this film to Blu-ray with thoughtful special features.

Oftentimes, it takes an “outsider” perspective to give us clarity on issues. Writer/Direct Rachid Bouchareb’s Two Men in Town is a neo-western drama that tackles some of the United States’ biggest issues with a group of searing performances led by Forest Whitaker.

William Garnett (Whitaker) recently released from prison on parole. Having served 18 years of a 21-year sentence for killing a Sheriff’s Deputy, Garnett had done his time and only wants to live a simple life having paid his debt to society.  Sheriff Bill Agati (Harvey Keitel), having been the sheriff at the time Garnett had killed the deputy, does not see it that way.  As Garnett attempts to build a life not only does Agati stand in his way but Garnett’s former partner Terence (Luis Guzman).  As pressure is applied at every turn Garnett tries to find support in the woman he loves (Dolores Heredia), his empathetic parole officer (Brenda Blethyn), and his faith…

Make no mistake Two Men in Town is a taut piece of filmmaking that is both a thriller and a character study.  The melding of the two genres by writers Olivier Lorelle, Rachid Bouchareb,

And Yasmina Khadra is one of empathy and understanding.  Most films would make this a ticking time bomb with plotting taking precedence over character.

Here, Bouchareb isn’t interested in the conventions or troupes of the thriller or crime drama.  Rather he is interested in characters who are tested against their ideals.  Through those interactions and actions, there are reactions and how Garnett deals with Agati, his parole officer, and the woman he loves is all swirled into a narrative that finds the truth about how people treat former prisoners/convicted criminals.

Two Men in Town understands and isn’t trying to solve the problems it brings its specific microscope to.  Rather Bourchareb’s film shows the truth of how without second chances and without an understanding of justice – and time served – we are lost and push people to make the easier choice time and time again.

The transfer provided to Cohen Media Group is a winner.  The handsome image is sharp and representative of the beautiful and crisp cinematography of the film shot on location in New Mexico.

Fences: making-of documentary (54:50) – this almost hour-long making-of discusses more than just the making of the movie but delves deep into border towns in the US (specifically New Mexico) and the various aspects of this supposed “issue”.  The making-of does a great job of being not just informative about the production but really dives deeply into the themes and issues that Two Men in Town brings up.  Comments are not relegated to the cast and crew of the production but actual political figures and citizens around New Mexico.  This is more than a special feature but a VITAL COMPANION PIECE to this very special film.  English and French with English Subtitles.

Two Men in Town is a powerful statement about second chances and our country’s view on former prisoners and parole.  High recommendations.