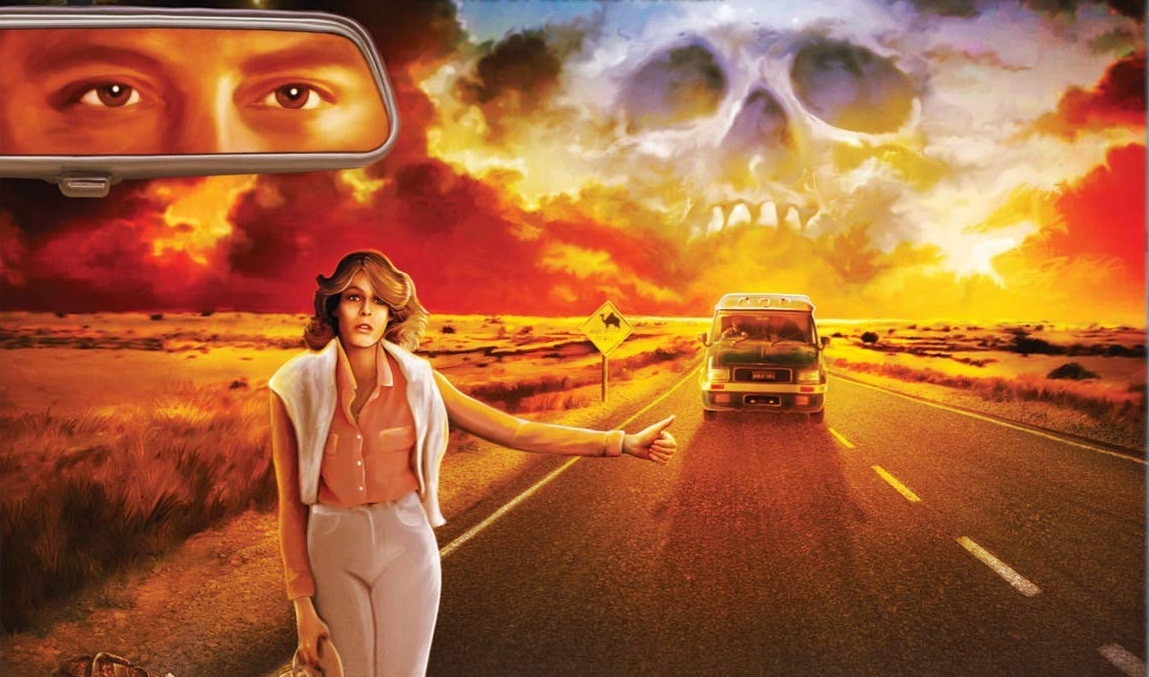 The Ozploitation Classic Road Games makes its US Debut on Blu-Ray thanks to Scream Factory.  The Hitchcockian Thriller is packed to the gills with extra features.

One of the best of the Ozsplotation films of the 70s and 80s, Richard Franklin’s Road Games is as close as anyone, excluding De Palma, came to making a film that rivaled Hitchcock’s style and mastery of the thriller genre.  Franklin adds the lunacy of Australian stunt crews into the mix making something that’s more his own than carbon copy Hitchcock.

Quid (Stacy Keach) is an aimless wanderer.  The wandering found the man driving a truck, not a truck driver (as he will tell you), in Southern Australia.  Coming off of a 72-hour run, Quid and his pet dingo Bosley, want nothing more than sleep.  That all changes when the offer of “double time” comes up to haul much-needed meat across the coast during a Meat Union Strike. It would be a normal run for the money if it wasn’t for pesky vacationers, a young mysterious hitchhiker (Jamie Lee Curtis), and a serial killer killing young women at every turn. All of this would be fine with Quid if it wasn’t looking like he was the primary suspect.

It should shock no one that Franklin would go on to direct the criminally underrated Psycho II after seeing Road Games.  The film is a perfectly modulated thriller in the same vein as any of the Hitchcock “wrong man” films with an “Average Joe”, this time being Keach, being put into an ever-tightening predicament of false guilt.  The biggest difference here is that Franklin uses Hitch as an inspiration; everything else is Franklin’s own style. The humor, still present here, is a less dry, much bawdier than Hitchcock would ever dare.  Franklin’s movie moves like an action film making for an all-together different feel, less stately and more rambunctious.

Road Games is the real deal.  An 80s Thriller you probably haven’t seen that’s got it all; thrills, Jamie Lee Curtis, humor, action, crazy-ass stunts, Stacy Keach in prime form, and did we mention Jamie Lee Curtis?  Pop the popcorn.  Pour the soda.  Rip open the candy.  Because you won’t have a better night than settling in later in the night for this piece of excellent pop cinema.

This is bad news for folks that have bought previous editions of Road Games.  Those hoping that Scream Factory would find better materials than Umbrella Entertainment did in 2016 when they did their 4K Remaster will be disappointed.  This disc is sourced from the same 4K elements.  People have complained in the past about the transfer which comes from the only printed elements left over.  The Transfer is better than the DVD and previous Blu-Ray releases we have seen but anyone that’s expecting a knock-your-socks-off new transfer should temper expectations. This is not Scream Factory’s fault, merely a matter of the best elements available to everyone.

The all-new audio commentary by hosted by Mark Hartley featuring Vince Monton (cinematographer), Helen Watts (production secretary), and Aphrodite Kondos (costume designer) is a lively affair with Hartley (director of Not Quite Hollywood) recorded as a group. Hartley prompts everyone to discuss the film and also gives a lot of great factoids about the film.

Audio commentary by Richard Franklin is definitely worth a listen. Pulled from the original Anchor Bay DVD with the late director is joined by Content Producer Perry Martin. With Martin prompting Franklin this is a great commentary filled with some fascinating not only hard production issues, production anecdotes, and Franklin’s style and artistic intent. This is one of the great old school commentaries with Franklin dropping some great information.

Australian Long Haul Stacy Keach on Road Games is an all-new 13-minute interview with the actor. The actor discusses getting hired, the Australian quota system, how Road Games filming began around the time that he was promoting The Long Riders, learning how to drive a 16-wheeler, how it was to work with Richard Franklin, a strange caterpillar story, jumping spiders, the difficulty of the shoot and how they shot the film going down southern Australia. It’s a fascinating interview.

Road Games Script Read with Richard Franklin, Stacy Keach, and Marion Edwards this all-new feature, clocking in at 1 hour and 56 minutes is quite possibly the most interesting feature on the disc and possible of the year. Franklin recorded the script read along with his introduction before they begin. What is fascinating is that Franklin explains his intent with every scene as they read through the script giving us a pre-production commentary.

Composer Brain May Music Demos is an all-new 4-minute featurette with May on the Piano playing the themes that would eventually become the musical score of the film. Production stills and behind the scenes photos accompany the music.

Kangaroo Hitchcock: The Making of Road Games is a 20-minute archival featurette on the making of the film. Included on prior releases of the film. The making-of is an extended version of what was discussed in Mark Hartley’s documentary Not Quite Hollywood. Featuring comments by the cast and crew.

Uncut interview from Mark Hartley’s Not Quite Hollywood speaking of which there is an hour worth of interviews with Jamie Lee Curtis, Stacy Keach, Richard Franklin, screenwriter Everett DeRoche, cinematographer Vincent Monton, 1st AD Tom Burstall. Though it’s raw interviews, one can differently get a complete picture from the various interviews of how this film came together.

Road Games: A Lecture by Richard Franklin, Barbi Taylor, and Brian May is a 2-hour and 10-minute feature recorded in 1980. The lecture shot on 80s Video which means the video and audio quality is not the greatest point in fact at points the “tracking” is outright distracting. Do not let this bother you… this featurette is the real deal. What is the greatest is everything contained in this 130-minute dissection of the film in a very collegiate way. This is a heavy-duty deep dive into how this film came together not only from a creative perspective but from a commercial, marketing, and cultural perspective. Once Franklin, Taylor, and May take to the stage they bring production photos as examples for things and May plays the piano at points. It truly is an amazing dee dive from these filmmakers.

Audio interview with Richard Franklin recorded in 2001 is a 23-minute Q&A style interview with a crowd. Discussing the USC experience he had with Carpenter, Lucas, and Millius with much wit and humor. He approaches everything discussed with that same amount of wit that you’d expect from the director of Road Games which includes making a now-famous Sex Doc, his first films and eventually Road Games.

Vintage Profile on Richard Franklin is a 25-minute vintage TV/Cable program that goes over the career of the director up until that time. Much of what’s discussed has been reviewed in audio commentaries and other features but is done here with visual examples.

Audio Interview with Stacy Keach is from a previous release in 2016. It’s a great 9-minute phone interview that discusses the performance more than the making of. Though they have discussions of the work with Franklin and in Australia. A lot of the stuff does cross over from other Featurettes.

Audio interview with Grant Page is a 32-minute phone interview done in 2016 in compliment to Keach’s interview. Page’s interview is all new stuff because Page really didn’t comment on the other features. His discussion of playing the Murderer and being the stunt coordinator is great.

Rounding out the special features are a theatrical trailer and still galleries. The 2-minute long trailer appears to be sourced from better material than the feature. The still gallery is to be played all at once at 32-minutes it’s not much of a gallery as it is a Book of sorts they combine production stills, lobby cards, behind the scene photos, and commentary in written form about the production.

Scream Factory’s Road Games Blu-Ray is worth the double-dip for the extra eight hours of additional content they’ve produced for this release.  HIGHEST POSSIBLE RECOMMENDATIONS!!!!

Scream Factory’s Blu-Ray edition of Road Games is out now!