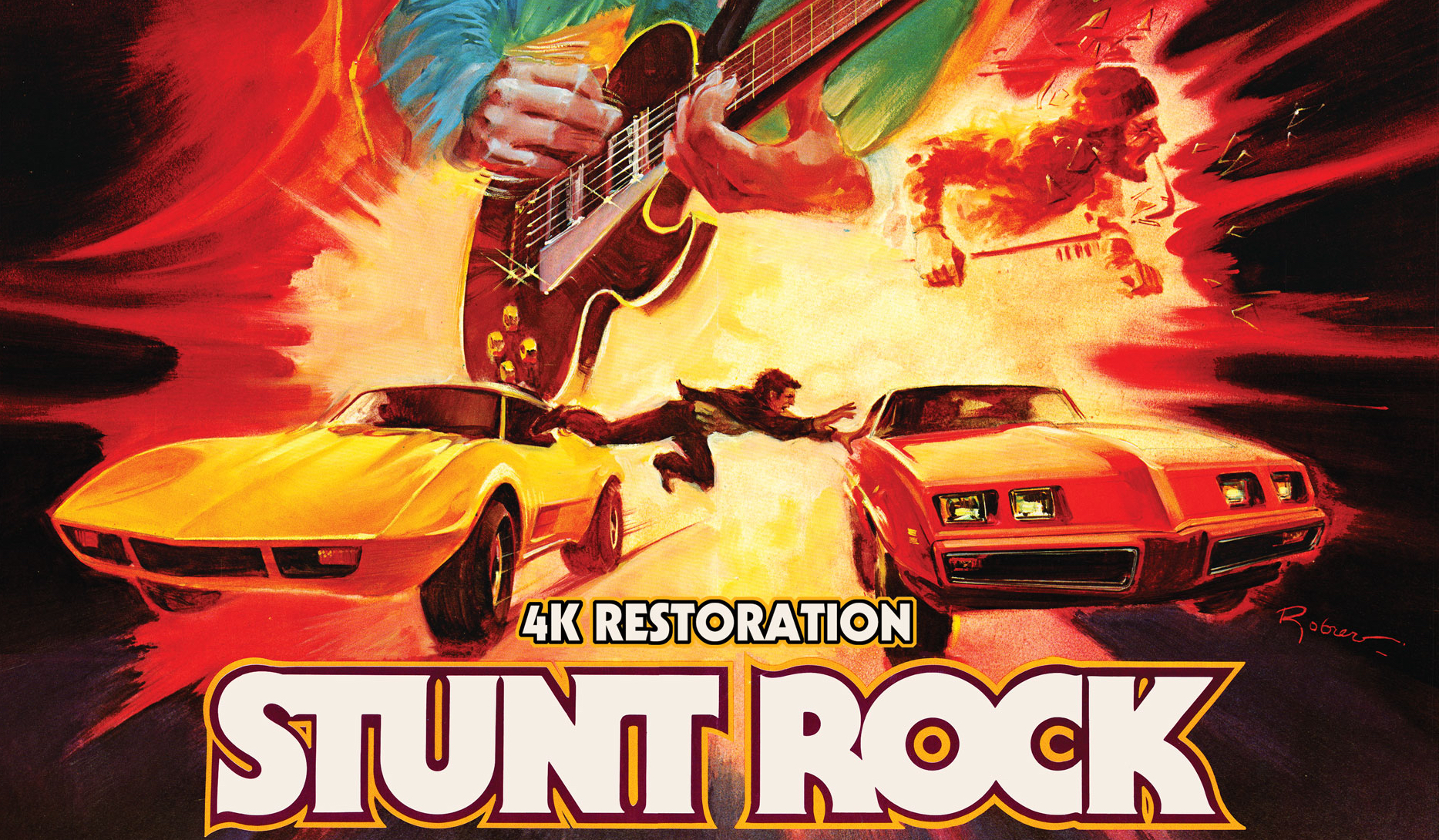 STUNT ROCK! is back in theaters.  If you know what’s good for you… you’ll go see it.

For those not in the know, one question does come up.

What the bloody hell is STUNT ROCK!?

Like another film said once; Once cannot be told what STUNT ROCK! is they have to see for themselves.  Because even as I review this powder keg of kick-ass you will still want to see it for yourself.

Part Documentary.  Part Concert Film.  Part Narrative Film.  All Badassery.  The film tells the story of Grant Page (Grant Page) and his trip to Hollywood as his brother’s band Sorcery (played by Sorcery) plays their one-of-a-kind Stunts-Magic-Rock N Roll spectacular to sold-out crowds at the (in)Famous Forum.  While Page works stunts on a TV show starring fellow Aussie Monique van de Ven (Monique van de Ven) attracts her attention, as well as Reporter Lois (Margaret Trenchard-Smith).  Over the days of filming the Pilot with van de Ven, Page gives both women a look into the world of stunts and its history.

Oh, yeah, and lots of watching Sorcery do what they do best… MAGIC!!!

Brain Trenchard-Smith’s is a little bit of Hooper, a bit of Song Remains the Same, and a huge awesome bomb of some of the greatest Stunts you’ll see.  STUNT ROCK! should under no circumstances work yet, the film’s charms are greater than the sum of its parts.  Trenchard-Smith knows that the combination of delirious stunts and rock ‘n roll is the main attraction here and uses it as the glue to make everything in the narrative stick.  It helps the director knows exactly how to shoot both stunts and musical performances for maximum effect.

Complicit in all of this is one of the greatest Stunt Performers in the history of Stunt Performers; Grant Page.  Page is known for his work on classics like Mad Max, Road Games, The Man from Hong Kong and more recently Max Mad: Fury Road is a Stuntie through and through.  Though separating him from a lot of Stuntmen, Page can act and does so with charm and wit in STUNT ROCK! playing a variation of himself.

If you are watching STUNT ROCK! for the acting and story… well, you’re absolutely in the wrong place.  The film delivers on both words of its title with the enthusiasm of an 8-year-old hopped up on candy that his grandma gave him.  The overwhelming sense of play, fun, and general mischief on display will make any action fiend or cineaste satisfied.  Whether it’s showcasing a stunt that went wrong on the Dennis Hopper insanity Mad Dog Morgan that ended up in the film or the history of Stuntmen or showing a Wizard fight a Demon on stage while Sorcery plays STUNT ROCK! is always arched in its tone with tongue planted firmly in cheek.

STUNT ROCK! should come with a money-back satisfaction guarantee (it does not) for all those entering the theater about to be both stunted and rocked.  Trenchard-Smith’s film does exactly that with style and wit to spare.