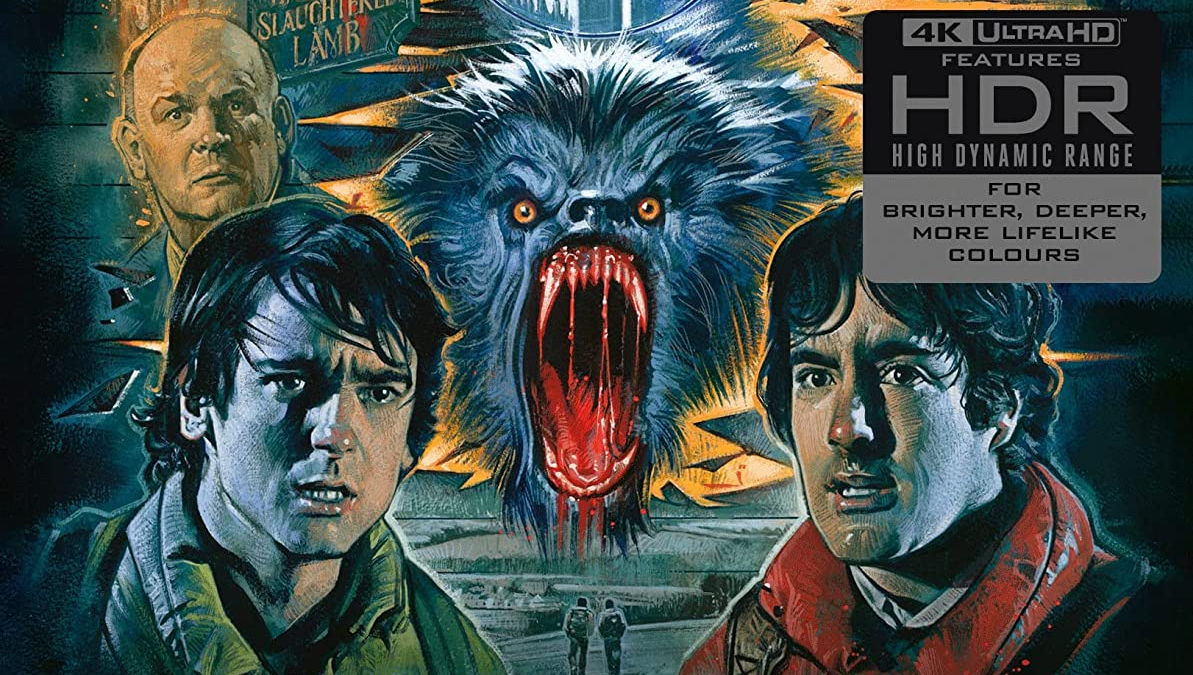 An American Werewolf in London gets a 4K UHD upgrade from Arrow Video.  The results… stunning.

The hardest films to write about are the ones that are written about ad nauseum.  Case in point the stone-cold classic that is An American Werewolf in London. Close to 40 years later the film is as powerful as ever and funny and also scary but funny but scary.

David (David Naughton) and Jack (Griffin Dunne) are backpacking through Europe when they are attacked by a werewolf.  David surviving the vicious attack can’t seem to shake the horrifying dreams and seeing Jack who may or may not be the Undead. Unwilling to believe everything that is occurring David finds comfort in the arm of a Nurse (Jenny Agutter) but she is no help as the full moon approaches.

John Landis’ film is still lighting in a bottle.

It’s one of those films that’s pitch-perfect tone is only matched by its beautiful script, direction, and acting.  There are a few items, if any, to critique about the film. Much of the film has aged gracefully though some of the jokes land on the wrong side of 2019 (naked balloon man wouldn’t fly nowadays).  Most of it is still equal parts hilarious and terrifying.

The centerpiece is still the transformation scene.  The scene which netted Rick Baker the first Make-up FX award is in this age of Digital FXs is stark and horrifying because it feels tangible.  Even its contemporaries like The Howling and Wolfen are nowhere nearly effective as Landis’ film.  Though other films of the era still manage to be effective, it’s Landis’ film that always rises to the top not only in its subgenres (eg Werewolf, Horror-Comedy) but also in the Horror genre as a whole.

Much of that is due to Landis breaking the code of how to properly do a Horror-Comedy, which many still do not follow.  Horror has to be horrific.  Comedy has to be funny.  But never the two shall meld.

An American Werewolf in London is a classic, but still an effective movie.  So few movies after close to four decades cannot say the same. Like Jaws, this movie still has plenty of teeth and still bites as wickedly as ever.

The Brand new 4K restoration by Arrow Video from the original camera negative presented in Dolby Vision is the best American Werewolf in London has ever looked. The film has never been a “gorgeous” film with Landis opting for a more grounded classically lensed picture by cinematographer Robert Paynter.  On UHD with the Dolby Vision encoding the image is beautifully rendered to mimic a newly struck 35mm archival print.  Similar to their work last year on Dune, this transfer seems to fix any of the issues/concerns people have with earlier iterations of the film on home video.  The grain structure, sharpness, and contrast are all beautifully reproduced on the disc.  The Dolby Vision gives a luminous to color and grain structure.  The image is darker but is expected when the color spectrum and widened with UHD.  Having seen the film multiple times at rep screenings this iteration is as good as any of those rep screenings.  Arrow’s work here is splendid and thoughtful bringing American Werewolf in London to 4K.

NOTE: Arrow Video continues to be the most forward-thinking Boutique Label by including ALL special features on their UHD DISC [looking at you CRITERION COLLECTION]!!!

The audio commentary by Paul Davis the director of the Beware the Moon and also the author of the book of the same name. Davis in lieu of having a Landis commentary (he does do commentaries) is the best possible person. Everything that you could possibly want to and not want to know about the film is discussed. Davis’ commentary is breezy, fun, and informative.

The audio commentary by David Naughton and Griffin Dunne is ported over from Original Blu-Ray is fantastic. Both Dunne and Naughton have much affection for each other, the film, and Landis. It’s a great and fun commentary. Though there are stretches of silences between their comments.

Wares of the Wolf is an 8-minute interview with special effects artist Dan Martin and Tim Lawes. Martin who is actually the co-host of the Arrow Podcast gives us a breakdown and visual essay on the props and what they call “artifacts” that remain in the UK. They discuss some of the pieces that have remained. It’s an arresting look at the work that was done in the film. Both film clips and behind the scenes photos and b-roll from the production.

I think he’s a Jew: The Werewolf’s Secret is a 12-minute visual essay by filmmaker Jon Spira is a discussion of Jewish culture and Jewish experience post-WWII. The way the Nazi used Werewolf iconography, and how the writer of the original Wolfman, Curt Siodmak, informed on the modern werewolf. It’s a brilliant dissection of how this informed John Landis’ iconic film.

The Werewolf’s Call is an 11-minute discussion with Corin Hardy (director of The Nun) and screenwriter Simon Ward and the influence of American Werewolf in London on their lives. Beginning with Hardy talking about his first experience with the film and how it changed him into a Horror geek. They begin a very lively discussion of the Landis Classic and how it specifically informed their lives and work. Part of the great part of this discussion is they actually break down how the balance is Horror and Comedy happens so beautifully in this film. Additionally, the director discusses how The Hallow (Corin’s 2015 feature) influenced by An American Werewolf in London’s creature FX work.

Beware the Moon is the feature-length (97-minutes) making-of documentary by Paul Davis. The film is a wonderful documentary breaking down the making-of the 1981 Horror-Comedy hybrid. Starring John Landis, Rick Baker, Robert Paynter, Deborah Landis, Jenny Agutter, David Naughton, Griffin Dunne, David Schofield, John Woodvine, and a lot of the other cast and crew are included. Beginning with the germination of the idea that started Landis’ film from a burial procession. Every piece of the production is discussed from the development of the script, getting the budget, make-up work, casting, even the surprising struggles with MPAA with the sex scenes, and just about everything you could possibly want to know about the production. All of the major set pieces are discussed in detail. This feature-length documentary has been included other releases of the film.

Making An American Werewolf in London is an archival 5-minute featurette. An old-school EPK shot on 16mm is similar to the making-of Thriller for those that have seen it. This is a great piece of nostalgia as it really does give you some insight into the production via b-roll footage.

An Interview with John Landis is an 18-minute archival interview where Landis covers much of what has already bee discussed in other featurettes on the disc. The interview basically tracks the writing of the script and eventual making-of the film. It is nice to be included and features some great behind the scenes photos.

Make-up Artist Rick Baker on An American Werewolf in London is an 11-minute interview with the legendary Makeup FX artist. Beginning with how Baker was told about the script by Landis during the making Schlock the FX Artist is quite informative on his side of making the groundbreaking and still genius work on the film. The interview includes one great outtake and b-roll footage as Baker describes some of the more complicated makeup. Some great anecdote includes Baker hiring literal kids and fans to help him and commenting on the infamous “neck flap” on Griffin Dunne.

I Walked with a Werewolf is a 7-minute interview with Rick Baker. The new interview is more of an ode to Universal Monster movies and his life and career as a Makeup FX artist. Some of the interview does go over some of the same ground as the previous interview but there is some great discusses on how effective the collaboration between he and Landis have. Also, included is notes about the recent remake of The Wolfman.

Casting of the Hand is a 10-minute featurette containing b-roll footage of Rick Baker and his crew working on casting David Naughton’s hand (with Landis watching in the bg). The title card says it’s October 11, 1980. The featurette is filmed to be a fly on the wall.  The footage is the same 16mm footage used in the archival Making-Of featurette.  Anyone who loves Makeup work and the nuts and bolts behind the work is going to want to see this footage. It’s absolutely fascinating and compelling to watch. There’s even a bit of drama with Naughton pulling his hand out of the cast.

The Outtakes amount to 3-minutes of various lifts from scenes, short ends, trims, moments before the clapper, and after the clapper. Also included is something called “Mysterious footage” which is Landis on a directing chair speaking to the camera as something quite naughty happens in the background. Note: no Soundtrack or Production Audio is included.

Storyboard Featurette is a 2.5-minute storyboard comparison of the Piccadilly Circus rampage scene.

They have included 3 Original Trailers. The 3-minute theatrical trailer. The 1-minute teaser which has no footage but is a highly effective teaser, it is similar to the Bram Stoker’s Dracula teaser that uses Blood as a major motif. The 30-second TV spot is fairly effective.

Finally, the Image Galleries are divided into 6 areas:

Arrow Video has given the classic horror-comedy a 4K UHD upgrade worth the price.  The mere fact they included all special features on the UHD DISCS is worth it alone.  HIGHEST POSSIBLE RECOMMENDATIONS!!!!!