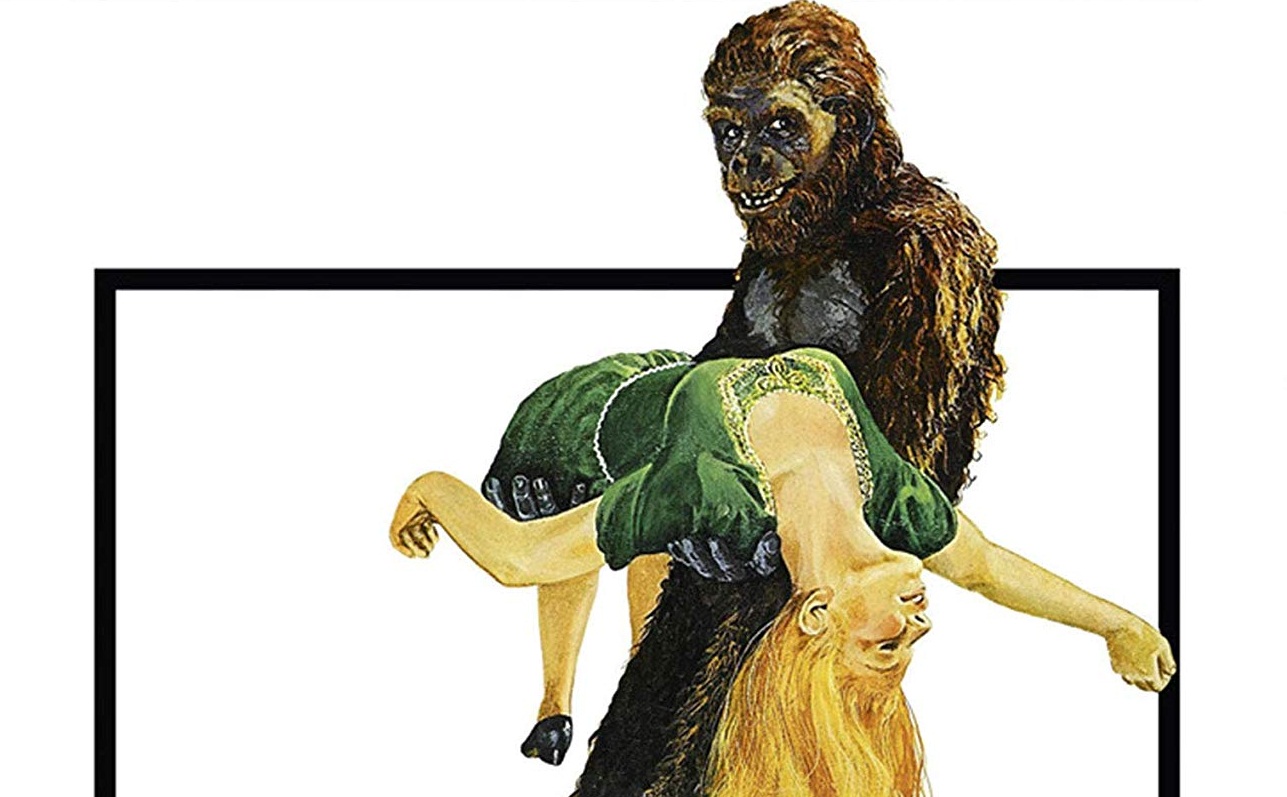 Adam likes John Landis’ Schlock in theory; he’s just not sure he likes it in execution.  The comedy satire has just been released by Arrow Video.

Those that think they will find a diamond in the rough with the viewing of John Landis’ feature film directorial debut Schlock, are only half right.  The film is kind of roughhewed homemade DIY audacious filmmaking that feels more accomplished because of its audacity rather than the execution.  It’s not to say that Schlock is terrible (it really isn’t), it’s just not the refined debut that one would have thought Landis would have directed.

The film’s thin storyline of the missing link aka Schlock (played by Landis himself) being accidentally released on an unsuspecting world is an excuse for a series of gags and cliched story troupes.  Similar to Attack of the Killer Tomatoes the film takes the conventions, troupes, clichés, and stereotypes of the 1950’s bad Sci-Fi films and places them on screen in a comedic context.  Nowhere near the kind of brilliant filmmaking acumen that the director would show in later work Schlock plays like one long joke over 75 minutes.  There are moments of hilarity and smart writing but they are in such small fits one would be forgiven if they missed it.

Ultimately, a harmless entry into the subgenre of self-parody Schlock is the type of film one would watch if they were a completist needing to watch all of Landis’ work.

The new 4K restoration of the film from the original camera negative that was produced by Arrow Video is beautiful.  Arrow continues its streak of amazing detailed restoration work.  Schlock has never looked as good as it has on this Blu-Ray.  Like most Arrow transfers there is a beautiful sheen of grain that isn’t lost or DNR’ed into oblivion.  Arrow has always sided on filmic transfers over crystal clarity and are better for it.  There transfer here is no different.   The film looks natural rather than forced digitally sharper.  Bravo to Arrow for ensure this film looks as film-like as possible.

The Audio Commentary by Landis and Baker is more entertaining than the movie itself.  Landis is his normal loquacious self.  The director quite frequently, with Baker egging him on, off on tangents and side stories that are hilarious and informative.  If one were to recommend this disc one could recommend it solely on the basis of the commentary.

Defrosting Schlock is a 17-minute interview and visual essay by Kim Morgan about Schlock. Specifically the critic discusses how Landis came to direct the project and the production history of the film.  If you have seen the other features by Newman on Arrow Video disc you will know the quality and depth of this interview which is more of a visual essay.

Birth of Schlock is a 47-minute Interview with John Landis about the making of Schlock.  Like all things Landis the interview is about Schlock but isn’t as Landis’ loquacious nature gives us more than just the making of his first film.  He takes us through his childhood and his time in Spain as a First AD, Extra and Actor.  He discussed his role as an actor and stunt person on Kelly’s Hero. It’s a rambunctious and hilarious interview.  He admits Schlock is a terrible movie but out of it came his meeting of Rick Baker who at the time was living with his parents in Covina (a suburbs on the outskirts of Los Angeles) at 19 and how he hired them.  How he played Schlock (the missing link) and how during the shooting, fate would have it, that it was one of the hottest summers in southern California history.  It was also the film he met George Folsey Jr. his great editor and producer.  The interview covers all the bases you would expect form a Landis interview including a lot of great stories and tidbits that I will leave for viewers to discover.

I shot Schlock is an older 7-minute archival interview with director of photography Bob Collins.

Rounding out the special features are the Promotional Material – Three different trailers 1972, 1979, 1982 “Banana Monster” trailer, radio spots.  The trailers are worth watching just to see how the trailer was only changed by added a simple tag.

What Schlock lacks as a film more than makes up for as a Blu-Ray disc.  A wealth of entertaining (more entertaining than the film) features bumps this one up to a Recommended!!!

Arrow Video’s Blu-Ray of Schlock is out now