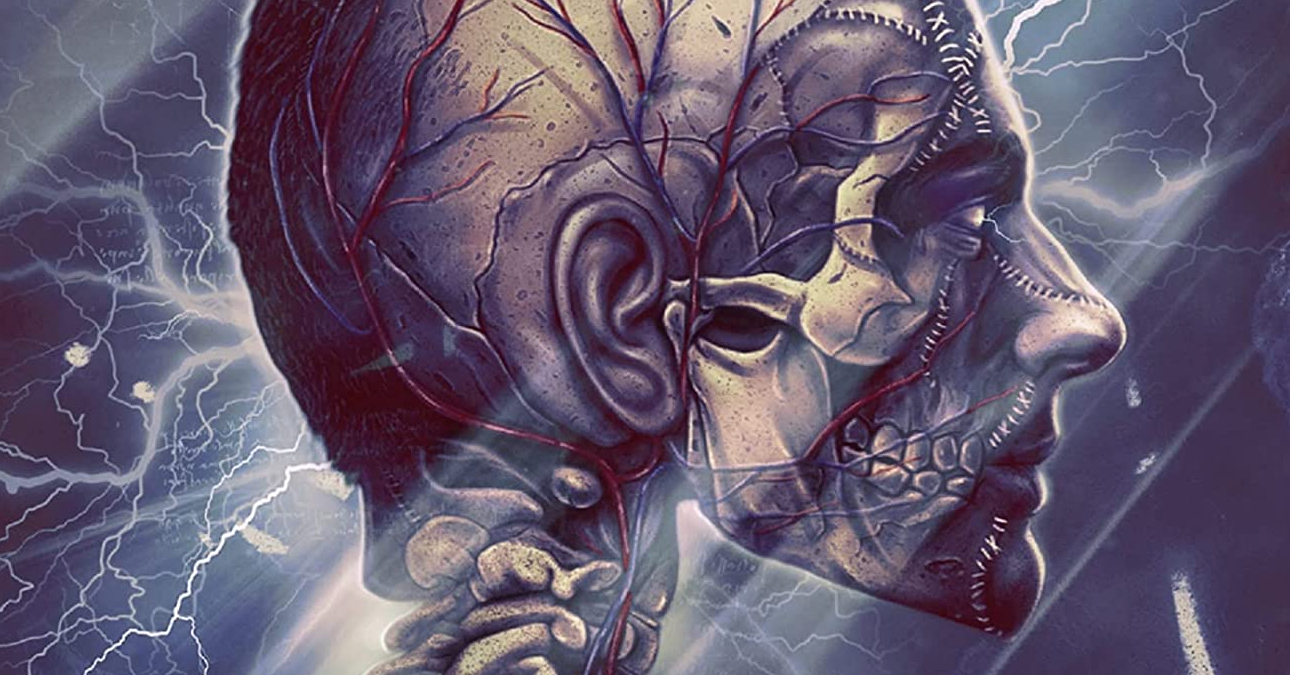 I still remember seeing Mary Shelley’s Frankenstein opening weekend.  I was 16 years old.  I had read Shelley’s book.  I had seen the Universal version.  I dug the hell out of Corman’s Version (Frankenstein Unbound).  I adored – still do – Mel Brook’s Young Frankenstein.  DeNiro was a modern-day iconic in the prime of his career.  Branagh’s Henry V between my friends and I was some kind of undercover medieval epic with battles that lived up to the Bard’s words.

All to say I was primed for this venture that everyone thought was akin to Coppola’s interpretation of Bram Stoker’s Dracula.

Wow were we wrong.

Cut to three decades later and a reappraisal has this reviewer wondering… Is this generally hyperactive overwrought adaptation of Frankenstein being just a wee bit ahead of its time???

The answer: sort of.

The work done by Branagh here is exhausting.  The camera never seems to stop moving.  The editing is so rat-tat-tat in unison with the HUGE propulsive score by Patrick Doyle.  It all leads somewhere.  It is stylish for sure.  There’s a certain amount of wide-eyed innocence to the way that Branagh directs everything.  Like he’s just figured out camera movement and wants to experiment with it until he’s come up with rules.  That sort of wonderment at the possibility and pushing it to the point of parody is fascinating.

Though, the emotion and subtext, of Shelly’s work are all but obliterated here.  Any subtly is erased and returned with an overwrought sense of emotions that would make even Douglas Sirk blush. What we are left with are actors who all are known for some of the best acting the modern era can muster … adrift playing things at the highest possible decibel (both literally and figuratively).  DeNiro, Branagh, Helena Bonham Carter, Tom Hulce, John Cleese, Ian Holm, and Aidan Quinn are all lost in a wall of sound and a fury of visuals.

DeNiro as the Monster does manage to create his own version though one must fight Branagh’s sound and fury to see it.  Though watching the Monster swing the villagers of Vienna around like he’s in a Wuxia movie will make anyone laugh.

In fact, much – if not all – of the pathos is nullified because of the unsubtle direction of Branagh.  Moments that are to be tragedies are met with either bafflement or brazen melodramatic tomfoolery.  Take the Wedding Night sequence.  What should have been the apex of the emotional throughline is met with a wet-sounding thud.  The way it’s shot you would have thought that the Monster was a Deadite and Branagh was about to turn into Ash and quip “let’s dance he-bitch”.  Actually, that would have been preferred to what happens during and after this sequence.

The visual work is nothing short of brilliant.  From an era where physical builds still happened, it is amazing to see the fully realized world created for the production.  From the production design by Tim Harvey to the costumes by James Acheson to the make-up work done by Daniel Parker there isn’t a piece that doesn’t work.  Through that sound and furious camera work, you can see the world-building is brilliant and seamless.  Harvey’s use of existing structures and sets to give us a unifying vision from Vienna to the Artic is beautiful in that used/faded luster approach. Acheson’s costume design is both bodice-ripping and period-appropriate.  Parker’s make-up work takes its cues from a heightened realism that Del Toro’s work would perfect.

Ultimately, Mary Shelly’s Frankenstein is worthy of a revisit if to only see the sort of excessive filmmaking of the mid-1990s brought us.   The sort of accurately adapted in the literal sense but tonally deaf to the substiles of the work that it was adapted from is a rarity that is as fascinating a failure as was produced in that era.

The New 4K restoration from the original camera negatives by Sony Pictures Entertainment in Dolby Vision (HDR10 compatible) is a revelation.  The UHD image is more of an accurate representation of the film’s theatrical experience.  The image encoded with Dolby Vision is an inherently darker transfer because of the color spectrum and contrast levels are broader giving us an image that is much more detailed in the blacks than it was in previous editions.  The grain structure again, like their recently UHD release of An American Werewolf in London is spot on, giving us a more filmic look.  Even comparisons to the Blu-Ray Edition of the transfer shows a noted uptick in the density of the image.  Where Blu-Ray still feels like Home Video, the UHD feels like an actual film print.  Bravo to Sony and Arrow for this beautiful presentation.

They Include the Following;

The all-new audio commentary by film historians Michael Brooke and Johnny Mains begins with their respective bonafides along with a sort of thesis of what they’ll be discussing.  Some of the details from the track are discussing Mary Shelley’s opening being used here, the first publication of the novel, how it was published, the fact that it went out anoymously, the rejection by critics because they knew that it was written by a woman, the massive set that was created at Shepperton Studios and the lengths they went to create this impressive set, the work of Tom Hulce, the work of John Cleese, accounts of science of similar ilk at the time (including quotes), the 1910 Thomas Edison produced Frankenstein (which is included here), the adaptation and lack of letters and diary entries in the film, the vaccination scenes that mirror our current climate, the creation of the monster in the book and how it’s been inflated by movies, readings from Shelley’s passage on the creation of the creature, the work of Bernie Wrightson and his reprinting of Mary Shelley’s Frankenstein and his beautiful 50 paintings he created for the book, Branagh’s version of the creation of the creature and all of the work that went into it, the work of Robert DeNiro, the painful makeup appliances – including the full body appliances – that DeNiro endured, the work of Richard Briers, the work of composer Patrick Doyle, how this adaptation keeps the monster’s voice which isn’t something that is within any other adaptations, a great anecdote about screening Young Frankenstein, Branagh’s love of and referencing Edward Scissorhands, a more personal account Mary Shelley’s life as related to Victor and Elizabeth and drawing from her life also including quotes, the various FX gurus that “audition” for the work including Rick Baker and who eventually won, the massive push to promote the film, the film’s failure, and much more.  Brooke and Mains give us a great commentary track that gives us some context for this much-maligned film.

Mary Shelley and The Creation of a Monster (29:37) – is an all-new documentary featurette on the origins and evolution of the Frankenstein story, featuring Gothic specialists David Pirie, Jonathan Rigby, and Stephen Volk.  This fascinating and very comprehensive featurette begins with how Gothic was an insult specifically starting with Architecture and then moving to literature at the time evolving and twisting in the romantic movement of literature.  The documentary gives context to which Mary Shelley created her novel, the personal, the scientific, and how her work influenced real work and vice versa.  The various adaptations stage, screen (both movies and TV), and much more.  The trio does a great job of giving us a true overview of how influential Shelley and her novel and the work surrounding it to the arts (not just horror) and history.  There is so much here on just how influential the novel and the other works that were adapted were over the last two hundred years.  There are some great photos, clips, and more intercut into the featurette.

Frankenstein: A Liberal Adaptation from Mrs. Shelley’s Famous Story for Edison Production (1910) [12:55] – From Arrow Video “The first screen adaptation of Shelley’s story in a 2K restoration by the Library of Congress, with music by Donald Sosin”.  In the title, the emphasis should really be on “liberal” because only the barest of essentials are left in this first adaptation of the monumental work.  The image is gorgeous in 4K with the color-tinted short is fairly well preserved.  The monster/creation and its inception are wild and nothing close to what we’re used to.  All in all, it’s truly great that Arrow has included this into their package, and in 4K no less!

Interviews – housed in their own subsection are three new interviews

Stitching Frankenstein: An Interview with Costume Designer James Acheson (14:53) – All-new interview with Acheson begins with a funny anecdote about meeting Kenneth Branagh.  Some of the details include Branagh’s adroit morning routine, how he approaches the work specifically in this film, how the make-up department interacted with the costume department, clothing the monster, how they used maquettes to costume sample, working with DeNiro, and much more.

We’ll Go No More A Roving: An Interview with Composer Patrick Doyle (12:40) – All-new interview with Doyle begins with discussing his decades-long collaboration with Branagh.  Some of the details include what inspired the score, including a song by Lord Byron, how he composed for the film, and much more.  Added bonus is seeing Doyle play his piano and sections of the score.

Making it all Up: An Interview with Make-up Artist Daniel Parker (14:22) – All-new interview with Parker begins with his informal training and how he learned from his father (who happened to do Kubrick’s 2001) where he learned both animatronics and make-up appliances which isn’t the case for most Make-up Artists.  Some of the other details include how he was hired, meeting Branagh, the design and the emotion he brought to the work, research on the make-up, his collaboration with other crew members, the amount of work that needed to be accomplished, and much more.

Rounding out the special features is an Image Gallery that houses 16 production stills.

Mary Shelley’s Frankenstein is worthy of a revisit.  Arrow Video with their 4K UHD set makes sure of it.  High Recommendations.