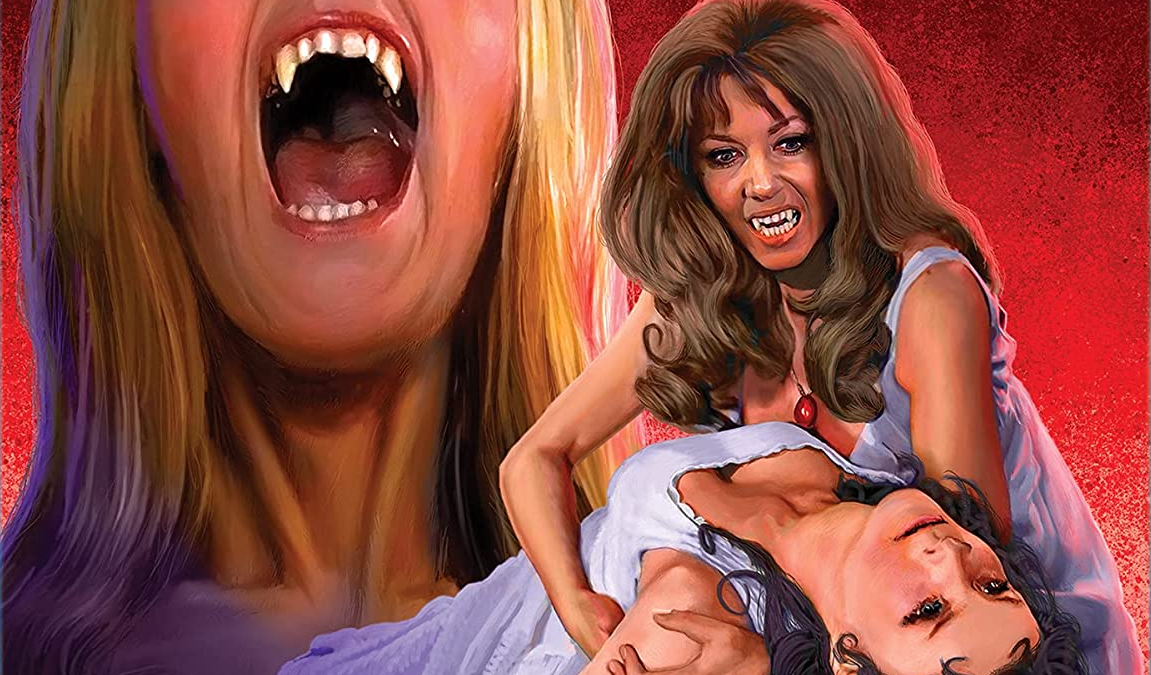 The Vampire Lovers is proof that Hammer and AIP are a match made in Hell/Heaven.  The new Scream Factory disc comes with a new 4K Scan of the negative and special features.

When Francis Ford Coppolla made the naughtier bit of Bram Stoker’s Dracula one is sure that he took inspiration from Roy Ward Baker’s saucy and randy The Vampire Lovers.  More of a bodice ripper than horror the film delights in the conceit of a female vampire setting her sights on the virginal women of an Estate belonging to a General (Peter Cushing in a cameo that’s a sly nod to his Van Helsing of old).

The film rather than focusing on the horror elements aims at the seduction of the pious Laura (Pippa Steel).  Marcilla (Ingrid Pitt) is as much a seductress as Dracula (Christopher Lee) was a seducer in the Hammer Films.  Though instead of the blood and transfixing horror element, Marcilla’s is more of a sexual seduction but is as much a hunter as Dracula is in previous films.  These moments are more effective than the scare in the piece, which is mostly Laura screaming and writhing in a four-post bed as vaguely menacing imagery occurs on screen.

The film never delves into outright softcore or anything outright trashy but enough naked bodies and sensuous caressing to raise anyone’s eyebrows.  There is a sort of leering quality to the way that everything unfolds.  Baker’s camera is never too far away from stopping to accommodate actors Ingrid Pitt, Madeline Smith, and Pippa Steel as they disrobe. Though the same could be said about the horror when it does finally begin to occur.  Baker’s camera seems to give the same sort of enthusiasm and sensuality to the bites and other random bits of horror that occurs.

The Vampire Lovers is definitely a dirty movie with the sort of “respectable” bonafides to get it past the sort of exploitative trashy of softcore to something a bit more Hammer and less AIP.  Though the AIP spirit is definitely alive and well.

What a difference a decade makes.  The new 4K Scan from the Original Camera Negative is a marvel.  The beautiful image is leaps and bounds better than previous editions, including the 2013 from Scream Factory Disc.  The contrast and sharpness make impressive upgrades to the transfer giving us not just a cleaner image but one that depth, color, shadow all show improvements.  Other than a UHD Dolby Vision color grading this is as good an image as we can get.  Bravo to Scream/Shout for getting a truly wonderful new transfer/scan making this worth the price of the upgrade alone.

The newly recorded commentary by Film Historian/Author Dr. Steve Haberman and Film Historian/Filmmaker Constantine Nasr.  The double-headed hydra of Haberman and Nasr have been recorded commentaries for other Hammer Films with great success.  Details from this commentary include details about the adaptation from the novella, the transition to a more modern take on vampires with all the overt violence and sexuality that is the norm in the modernist takes, screenwriter Tudor Gates contributions and why he was hired, the work and life of Ingrid Pitt, Universal wanting to make a 3D version of Carmilla (the novella), the editing of the film and how much it was reconstructed in post-production, the fact that the actress stated that they had no idea of the LBGTQ themes, the work of actor John Finch, the excessive nudity and the infamous bath scene, quotes from Gates at the time on the nudity and LBGTQ thematics, an account of how the production of that bath scene occurred, the changes in the rating system in the UK, the change in the guard at Hammer Films at the time, the partnership that arose at the time with American International Pictures, the rating boards in both US and UK benefited the release, a discussion of the script and things that were removed, and much more.  The duo like they’ve done before with The Brides of Dracula and Kiss of the Vampire they bring a deeply researched, entertaining commentary track.

The second commentary track is an archival one hosted by author Jonathon Sothcott with comments by Director Roy Ward Baker, Actress Ingrid Pitt, And Screenwriter Tudor Gates.  Sothcott begins by having the interview subjects discuss who they were and quickly how they came onto the project.  Some of the other details include the casting of the film, the cameo by Peter Cushing and how it came about, Pitt and Baker’s opinions on the original story and the adaptation by Gates, the press tour, a discussion of what it was like working and being around with Peter Cushing, a discussion about the infamous bath scene, the nudity and each of their takes on the matter, Pitt’s autobiography and how harrowing a life the actress led Pitt’s own discussion about LBGTQ slant and her own opinions about the matter which leads to a great conversation about each participants opinions on the matter, and much more.  Sothcott does a great job of driving the conversation getting some truly wonderful information about the production from all three.  Note: you’ll want to turn up the volume on this one as all the participants speak very softly other than Sothcott.

The third and final audio commentary is an archival one with Film Historians Marcus Hearn and Jonathan Rigby. Much like the Haberman and Nasr track, this is an informational deep dive into the production.  Hearn is the Historian for Hammer and notes they record the commentary on Halloween of 2014.  Some of the detail include a matte shot that would come back to Scars of Dracula, the production design by Scott McGregor, how they achieved the severed head from the open title sequence, the original source material’s influence on Bram Stoker, differences between Hammer go to directors Baker and Terrence Fisher, a humorous aside about a famous Music Producer who was married to one of the stars of the film, the production details and anecdotes about the notorious bathtub scenes, the work of actor Ingrid Pitt, Censorship issues from that scene and the general tone of the piece, some very odd concerns by API, a record released by Hammer in the early 70s that sounds very very intriguing, how Hammer wanted to make this a franchise (Twins of Evil and Lust for a Vampire) which would eventually become known by fans as the Constaine trilogy, the various adaptations of the source material (Camilla) which they are plenty including a recent (2014) movie, a conversation about the lack of “knickers” in the film and the reason why “thanks” to director Baker, screenwriter Gates thoughts on the film itself and where it ranks in Hammer Producitons, and much more.  Hern and Rigby give us a witty and informational commentary track.

The Rapture of Cruelty: Carmilla In Classic Cinema (53:00) – is an all-new Audio Essay by Steve Haberman Read By Actress Madeline Smith.  Smith introduces herself and begins to read the essay about not only the novella Carmilla, its author Sheridan Le Fanu, and much more.  The Essay lasts about 53-minutes in total.  I mention this because the essay is accessed through the AUDIO menu (it can also be found in the Extras submenu as well) and once completed goes back to the movie’s normal audio track.

To Love a Vampire (15:53) – is an all-new introduction by Actor Madeline Smith.  Smith gives a truly epic intro to the film.  With great enthusiasm Smith comments about various aspects of the production including how she was cast, how she approached the role, the production and what she loved so much about it, the costuming, and more.  The interview is intercut with scenes from the film.

Carnal Crimson (19:05) – is an all-new interview with Film Historian/Author Kim Newman on The Carmilla Legend. The Author discusses Hammer films at the time and how “defanged” they had become which made it possible to make The Vampire Lovers and other modernist takes on horror.  Some of the other details include a history of the source material Carmilla, the API collaboration, the “sequels” of The Vampire Lovers – Lust for a Vampire, and Twins of Evil, those films lack of Carmilla and vampires altogether, and much more.  As with all interviews featuring Newman, he brings his considerable knowledge and insight to this film and Hammer Production of the era.

Fangs for The Memories (24:31) – is an all-new interview with Film Historian/Author Jonathan Rigby discusses THE VAMPIRE LOVERS.  Much like Newman’s featurette, Rigby discusses not just the making of the film but gives us a look at the production, Hammer wanting to get into the more salacious content because of the revising of the ratings, how the casting of both Ingrid Pitt and Peter Cushing were tied, nudity in the era and how it was approached, Pitt’s feelings on nudity at the time and in more recent interviews, the casting of Madeline Smith, Smith’s feeling on the nudity and the role itself, the casting of Kate O’Mara, the various supporting players, a nice aside about Cushing and Lee with Sherlock Holmes, and much more.  Rigby brings his considerable knowledge of all things Hammer to this discussion about The Vampire Lovers.

Feminine Fantastique – Resurrecting THE VAMPIRE LOVERS (9:56) – a critical and behind-the-scenes look at The Vampire Lovers.  The featurette looks at the literary origins, the era that the film was released, Ingrid Pitt and the other cast, the sexuality and themes the film deals with, and more.  Comments by critics and historians like Ted Newsom, Kim Newman, David Skal, and others.

New Blood: Hammer Enters The 70s (26:22) – Film Historians Discuss Hammer Films During The 70s.  This archival featurette gives a considerably detailed account of behind-the-scenes at Hammer as they began to shift from the features of the 50s and 60s into a more modern take.  This really gets into the executives and behind-the-scenes talents involved with Hammer from the beginning (it was essentially a studio run by a few families) and the adjustment and sometimes growing pains they faced in this era.  The featurette does spend a large part of its run time discussing The Vampire Lovers as it was the first of the “new era” features to feature explicit nudity and content.  The featurette is handsomely shot and edited with a bevy of behind-the-scenes photos.

Madeline Smith: Vampire Lover (20:32) – an archival interview with Actress Madeline Smith.  Smith brings the same sort of enthusiasm and wit to this interview as she brought to the newer “introduction”.  Some of the alternate details she goes over is how API were the people that added the “hotten up bits” as she says, her approach to the performance, learning to ride horses, working with Ingrid Pitt, and much more.  The interview is intercut with scenes from the film and production stills.

Reading Of Carmilla by Actress Ingrid Pitt (12:05) – a reading of this abbreviated version of the short story plays over various animated production stills and scenes from the film (including the most lurid of scenes).

Deleted Shot of The Opening Beheading (1:22) – the entire opening moment of the beheading plays including the shot that was cut initially by censors.

Trailers From Hell: Mick Garris on THE VAMPIRE LOVERS (2:34) – Garris provides a mico-commentary for the trailer.

Radio Spots (1:29) – the 3-radio spots play over a production still and a cheeky bit of animation.

Image Gallery (15:05) – the gallery begins with the fact that it does contain nudity and that the film was originally released with an R-rated for the more … conservative viewers one is to guess.  The gallery contains over 600 movie stills, Behind-The-Scenes Photos, Posters, and Lobby Cards!  The gallery runs automatically but can be paused. Unfortunately, there is no individual navigation.

The Vampire Lovers is a classic modernist take on Vampires.  Scream Factory has given the film a proper release filled with great insightful extras.  HIGHEST POSSIBLE RECOMMENDATIONS!!!