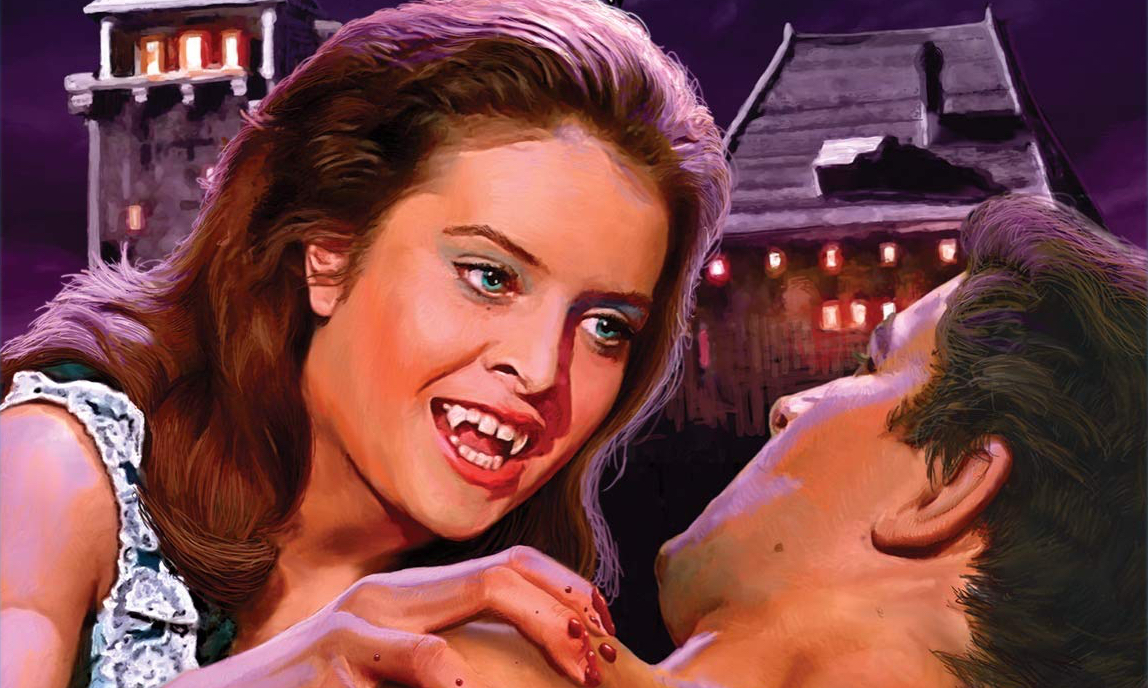 In the Hammer tradition of Vampires and Gaslighting comes Kiss of the Vampire. Just your average early 20th Century tail of a Newlywed dolts that come into the gaze of a vicious Vampire clan.

Gerald and Marianne make the stupidest of stupid mistakes Newlyweds can make In their era… Honeymooning in Bulgaria.  I mean really??? You’re just asking for some kind of supernatural trouble.  The couple gets it in the form of Dr. Ravna and his brood of Vampires and Cultish underlings. Of course, Dr. Ravna wants nothing more than Marianne and will go to great lengths to get her.  Can the dim bulb Gerald with the help of the alcoholic Professor Zimmer.

Prime era Hammer horror doesn’t get more delicious than this.  The film’s beautiful production design, photography, and score dull the oftentimes hilarious story.  The film is directed with a stately beauty by

Don Sharp (who directed the much better Rasputin, The Mad Monk).  The film is always on point with it’s design and look.

Where the film falls short is with it’s script.  Some of the choices are inspired.  The cult, the gaslighting are smart choices in the way they are setup and paid off.  Those are countered by awful character choices that seem to be dictated by the need to move the script forward. The couple makes choices and react to things that just make them look stupid.  Rather than finding ways around story issues like getting the characters together they rely on Gerald and Marianne being dummies.  Which in all fairness may have been the case at the time but in a film, even one from the 1960s, is a hard ask.

Many Hammer fans will love this one for the sumptuous deign.  Others may find it derivative and exactly what they expect from a 50-year-old horror film.

The new 2K Scan of the Interpositive In Two Aspect Ratios (1.85:1 And 1.66:1) is the type of extra added attention to detail that makes Scream Factory collector’s edition worth their money.  The film is beautifully represented here in both formats but the 1.66 aka the original theatrical Exhibition in Europe is the way to go.  Though only slightly more information, the 1.66 definitely gives more information on all sides of the frame.  The framing is also slightly more pleasing to the eye and by default the image looks sharper as the image is not zoomed in.  Both versions do sport an amazing color spectrum with vivid reds (anyone who’s seen a Hamer Horror film will know the red I speak of) reproduced in almost UHD quality.

Note: both films are slightly different experiences as the framing leads to a more claustrophobic experience in the 1.85 frame.  The 1.66 is a more pleasing experience as its framed as the director intended. Nuanced, albeit however small, still deserve to be reviewed and critiqued.  Scream Factory definitely deserves compliments for going the extra mile by including both versions as they know their audience.  An audience that is grateful they understand these attentions to details.

You have to love Scream Factory for including not one, or two but three commentaries and placing them each on different versions of the version.

The Men Who Made Hammer: Composer James Bernard – is an all-new 17-minute featurette/profile on the composer who coined the Hammer musical sound.  Using behind-the-scenes photos and interview with Publisher of Little Shoppe of Horrors Magazine Richard Klemensen to discuss the Composer’s work on the film and many others.  As the title suggests Bernard’s musical sound was heavily influential in what would become Hammer Horror.

The Men Who Made Hammer: Production Designer Bernard Robinson – is an all-new 20-minute featurette/profile on Production Designer.  Similar to the previous featurette, Richard Klemensen, profiles the production designer and his influence on Hammer’s specific look.  Also, with this featurette/profile there are a ton of great behind-the-scenes photos along with musings by Klemensen who knows a great deal about Robinson’s work.

TV Version (1.33) the SD version of the film similar to the TV version of The Thing Scream Factory had placed on their Collector’s edition.  All of the gore has been taken out, and the additional footage that has been added.  The additional footage is fascinating albeit terrible TV-Movie of the era Quality of the new footage.  Only hardcore fans will want to watch this.  Though people will definitely want to listen to the commentary that’s included.

Additional Scenes – amounting to 17-miutes of filler added to ensure that the film could play on Network Television.  The scenes are SD Quality as they’ve been pulled directly from the TV Version of the film.  Those that do not want to sit through the TV version but are curious about what has been added will find this section very helpful.

Rounding out the special features are a Trailer (1:29), Radio Spot (1:02), TV Spots.  The Trailer and TV Spot are not restored.  The TV Spot is basically an abbreviated version of the Theatrical Trailer.  The Radio spot has a nice graphic and animation when played.

Scream Factory has put Kiss of the Vampire’s best foot forward.  Three different versions.  Commentaries on all three. A wealth of extras.  A beautiful transfer.  There isn’t much more that a Hammer fan could ask for.  HIGHEST POSSIBLE RECOMMENDATION – Hammer Fans.  POSSIBLE RECOMMEND – Non-Hammer but Horror Fans.