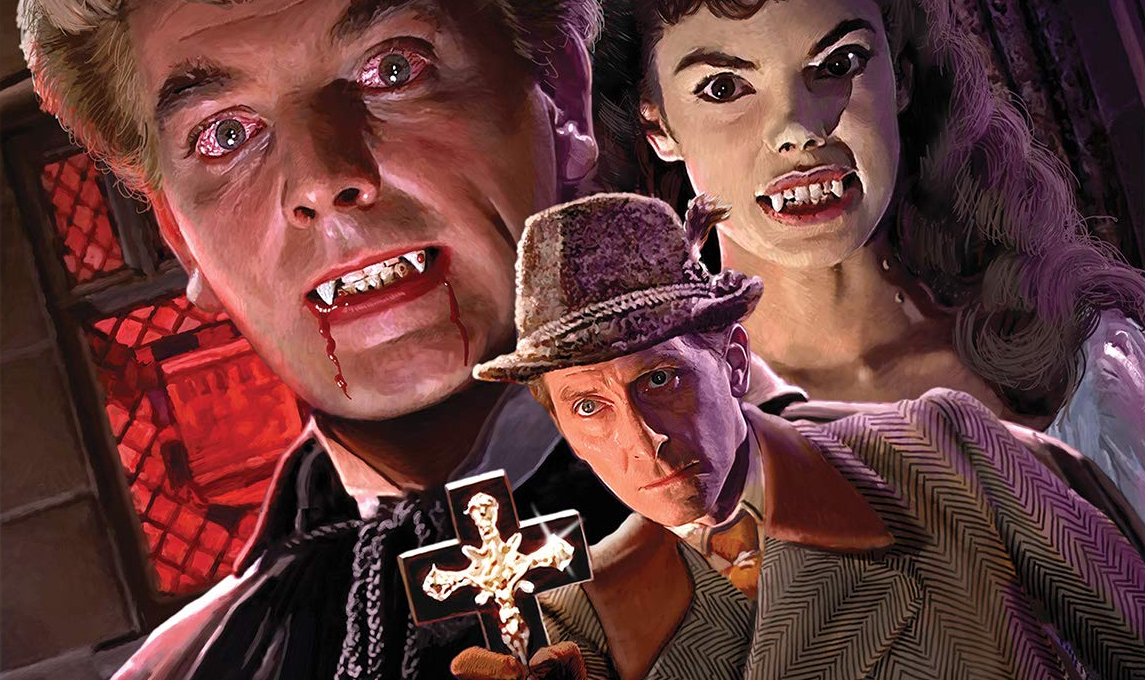 The Brides of Dracula, the most iconic and possible best Hammer Films comes to Blu-Ray. Scream Factory gives us a truly great collector’s edition with a Beautiful Transfer and extras.

What do you do with a sequel to your biggest hit when you’re cheap and don’t want to pony up the money for your Star?  Well, you bring back the second lead, write a truly clever and engaging script, bring the director back and a bigger budget.  With a lot of lucky and alchemy you get The Brides of Dracula which has no Dracula but does have Van Helsing aka Peter Cushing.

Set after the demise of Dracula (Christopher Lee).  The repercussions of Dracula’s death echoes through Europe with his Brides and followers have begun to strike make their presence known.  A French teacher Marianne (Yvonne Monlaur) is on her way to Transylvania to fill a position when she’s left in at an Inn by the Stagecoach that brought her there.  She does eventually make to the school that she’s to teach in.  Not before she meets and put under the spell of Baron Meinster (David Peel).

The Brides of Dracula is the proto-sequel template that many if not all sequels follow that loose their primary star.  No doubt, Lee’s star power is certainly lost but what the film gains is a sense of stakes.  Dracula is dead.  He doesn’t come back.  Van Helsing won but still has to contend with a much larger world.  This is the movie’s strength that it creates a larger world that Van Helsing will have to fight within.  Rather than recycling and figuring out how to bring Dracula from the dead, they have created new story.

The anchor here is Peter Cushing bringing all the gravitas, magnetism, and physicality to the role of Van Helsing.  From the moment Cushing shows up on screen, close to forty-five minutes in, he owns the screen.  There is nothing that is asked of the actor that he isn’t able to sell to you.  Even as he tries to save himself from a bite, its not the way that the scene is shot or directed by rather Cushing’s commitment to the scene.  In fact, Cushing single-handedly created the vampire cure in this film, regardless of who wrote it.

The Brides of Dracula is truly a great sequel to the original Dracula.  Rather than recycle a formula they found a way to solve the problem of loosing their charismatic villain.

The new 2K Scan From The Interpositive – In Two Aspect Ratios (1.85:1 And 1.66:1) is nothing short of stunning.  The transfer’s reproduction of the technicolor color is one of the best we’ve seen this year.  The color usage in this film is on par with a Powell and Pressburger film and its treated as such.  The 1.66 version is an extra but as it was the original framing by Terence Fisher the director it should be the preferred version.

The new commentary by the dynamic duo of Haberman and Nasr is great.  There is not a single piece of information about the production and the film that they don’t investigate and discuss.  Haberman and Nasr discuss the lack of Christopher Lee but Peter Cushing starring, the budget increase because Hammer taking on Universal as a partner, the Vampire lore in Hammer, Terence Fisher as a director, the history of the production, the various great European cast, the develop of the script, the influence of this film and Hammer as a whole on the genre worldwide, Producer Anthony Hines, the artfulness of the Hammer films, the alternate ending that was scripted but lost in development, and much more.  If one is familiar with the duo the same level of information and entertainment is to be had on this great commentary.

The Men Who Made Hammer: Terence Fisher (58:21) – is an all-new featurette (directed by Nasr) about the director of some of the most iconic Hammer films.  Featuring comments by Editor/Publisher Richard Klemensen and using behind the scenes stills, production stills, and various pieces of art and film clips creates a biography of sorts of Fisher’s filmography.  The featurette goes through Fisher’s career with a certain amount of honesty about the director’s career and the setbacks.  There is a sadness to what could have been in Fisher’s career that towards the later part of his life was besieged with health issues.  This is a great documentary on a filmmaker that isn’t often credited with just how much of an impact he had on film and specifically horror.

The Men Who Made Hammer: Jack Asher (16:24) – is an all-new featurette (again directed by Nasr) this time about the Director of Photography of some of the beautifully photographed and lit Hammer Films produced.  Again, featuring comments by Editor/Publisher Richard Klemensen and using behind the scenes stills, production stills, and various pieces of art and film clips creates a biography of sorts of Asher’s filmography.  Klemensen not only recounts the cinematographer’s career but makes sure to give us the examples of how much Asher molded the visual style of a hammer film.  Much like Fisher, Asher’s later career is filled with sadness.

The Eternal And The Damned: Malcolm Williamson And The Brides Of Dracula (15:22) – is an all-new featurette discussing the work of Williamson.  Essentially an interview with author David Huckvale, who at the piano discusses the composers work on The Brides of Dracula, giving examples by playing the score on his piano.  Additionally discussion goes to Williamson’s relationship with iconic Hammer Composer James Bernard, troubles in his life, and more.  It’s a great featurette that uses Huckvale’s skill as a musician to great effect.

Introduction & The Making Of Brides Of Dracula (31:10) – the archival making-of featurette is narrated By Edward De Souza with Interviews with Anthony Hines, Yvonne Monlaur, Jimmy Sangster, Hugh Harlow, and more.  This entertaining and informative making-of goes into the development of the script, casting, pre-production, production, and release of The Brides of Dracula the sequel of the hugely success of Hammer’s Dracula starring Christopher Lee and Peter Cushing.  There are some great details on the making of like Cushing’s disdain for the scripts of Sangster, the making of sets for the first time (Hammer filmed at actual castles at first), and much more.

The Haunted History Of Oakley Court (15:13) – this archival feature (from Severin films release) is about the Home that features promptly in The Brides of Dracula and many other Hammer Films.  Some of the great pieces of information include the countless number of films that used the castle, the interiors were used to film The Rocky Horror Picture Show, that it’s often rented out by weddings, and much more.

Theatrical Trailers (4:06) – two trailers done in that overwrought style that most horror/gothic films were done in the 1960s.   Of Note that they call actress Yvonne Monlaur “France’s latest Sex Kitten” which must’ve meant something back then other than insulting.

Radio Spots (1:03) – two radio spots that play over an Image of Andree Melly from the film.

The Brides of Dracula is another winner for Scream Factory.  They’ve done one of the best Hammer Vampire films justice with an amazing Transfer and a wealth of extras.  Highest Recommended!!!