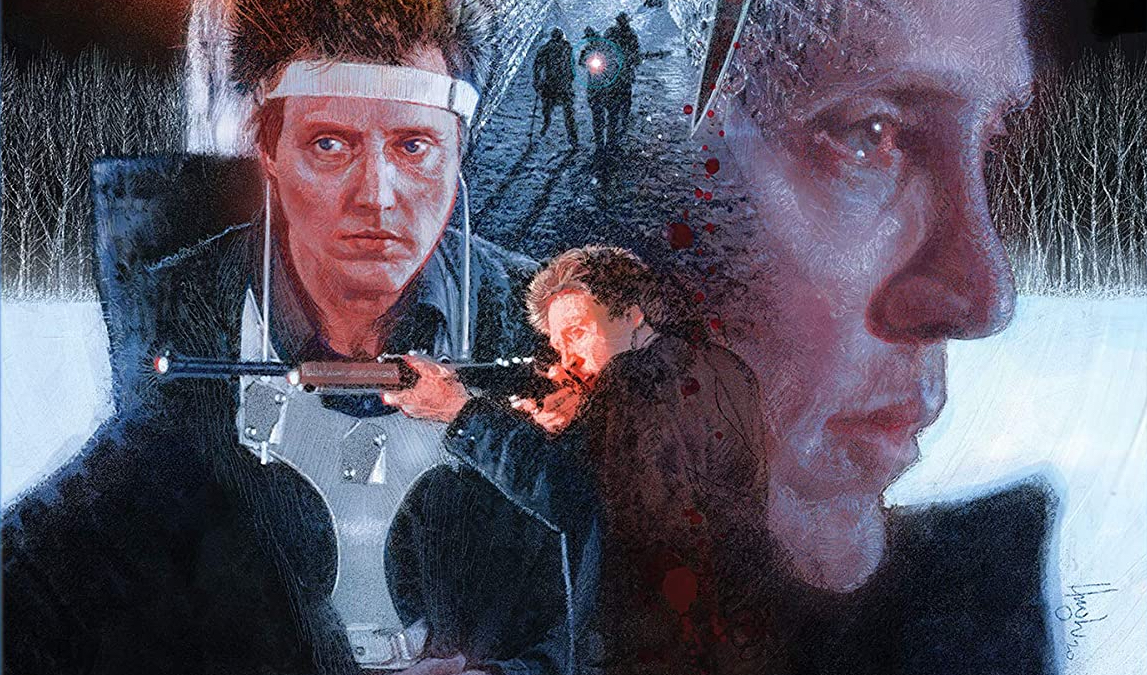 David Cronenberg’s masterful adaptation of Stephen King’s The Dead Zone gets a beautifully produced much deserved special edition from Scream Factory with a new 4K Scan of the Original Negative.

The key in any adaptation, especially one of Stephen King’s works, is knowing what the pair down.  The film adaptation of The Dead Zone is the perfect distillation of the haunting novel paired with a truly amazing performance by Christopher Walken.

High School English Teacher Johnny Smith (Walken) is at the beginning of his life; good career, a loving partner (Brooke Adams) he’s crazy about.  It only takes a freak accident to take that away from him.  Smith awakens five years later to a changing world and a changed self.  Not just physically changed but something else entirely.  Now when he touches someone’s hand he can see into their lives, their darkest secrets, their futures.  This ability is not a gift, however, the farthest thing from it.  With these growing powers, he finds himself confronted by a sinister future literally at the hands of a Congressional hopeful Greg Stillson (Martin Sheen).  Smith with time quickly running out must do the unthinkable for a world that has forsaken and thrown him away.

One of the most wonderful things about horror is how it can be used as a delivery system to tell stories normally no paying audience would go see.  The Dead Zone with its tale of rehabilitation, loss of time, and sacrifice is something that if the supernatural elements were taken out, most would not go to see.  The adaptation by Jeffery Boam retains the sadness and beauty of Johnny’s journey throughout the book until its final moments.  Smartly, the script drops almost all of the narrative concerning Stillson having the Politician show up in the last third. Boam’s script, with workings by Cronenberg, and its judicious editing crafts a story of loss and true heroism.  The kind of heroism that comes at the cost of no one knowing.

It is no wonder that Christopher Walken considers this among his favorite performances.  There is the same sort of shattered humanity that the actor brought to The Deer Hunter that made that performance so heartbreaking (and awards-worthy).  Johnny is a young man with everything in front of him and in a blink of an eye and half a decade later is left with a shattered body and a “gift” that is more horror and blessing.  Walken plays each scene with a sort of vacant shell-shocked loss that really has to be seen and not described.  The work is artfully accurate and the kind of work that would cement Walken as one of the great unique talents of his generation.

In the center of this artfully delicately brutal work is David Cronenberg.  The Dead Zone is one of his first fully realized works of art.  Released within the same year as Videodrome, the two films represent the evolution of a director.  The evolution from arresting filmmaker to true world-renowned artist.  If Videodrome shows a unique visionary delving deep into his own thematic interests with little to no care for audience reception.  Then The Dead Zone shows that same unique artist tackling those similar thematic interests in a commercial venue/form.  The latter results are as astounding as the former if not more so.

The Dead Zone shows David Cronenberg can be as close emotionally to a subject as he can distance himself and still create the kind of stunning unique horror within the studio system.

The new 4K Scan of The Original Camera Negative that was done in 2021 is a revelation.  The film’s winter setting is beautifully reproduced here with little to no issue. The transfer always remains sharp and without digital defects that can come with a film primarily shot in the snow and at night. The white levels and contrast which could have been an issue are also near-perfectly reproduced on this disc. All around this handsome Blu-Ray is as good as The Dead Zone has looked at home or in the theaters.

The new audio commentary with Director of Photography Mark Irwin is hosted by Michael Felsher.  Irwin begins with the details of how he was hired for the production which is highly entertaining which began with working on Cronenberg’s Fast Company.  Other details include Irwin writing his thesis in film theory on Cronenberg, shooting this and Videodrome back-to-back, Cronenberg’s lack of control because of how much that Stephen King had, the look and feel that Irwin and Cronenberg worked on, shooting Canada for America or as Irwin says “Rockwell Americana”, how the truck accident was achieved, casting what if’s before Christopher Walken cast (including a very strange Saturday Night Live alumni), working with producer Debra Hill, how the set piece for Johnny’s first “vision” was achieved, how it was working with Christopher Walken, how the Johnny reaction shots were achieved, how it was working with Dino DeLaurentis, working with Brooke Adams, the reported “odd” behavior that Christopher Walken is known for (especially later in his career), a hilarious Walken impersonation by Irwin, Toronto’s film production infrastructure at the time, the actress that played Walken’s mother only being four years older than Walken, how the lighting and camera works evolves throughout the film as Johnny powers grow, the alternate idea for the suicide of the deputy, a crazy personal anecdote about a horrible accident that Irwin witnessed that informed on the deputy’s suicide, how the drowning Hockey Kids set piece was achieved, and much more.  Irwin is a fascinating commentator giving us both technical and personal anecdotes about the production.  Considering it was 37 years ago his recall of details is amazing and well worth listening to.

The second new Audio Commentary with Film Historian Michael Gingold.  Gingold admits in the opening that this is his favorite King Adaptation, Cornenbreg film, and Walken film.  Details include a discussion of the opening credit designed by R Greenberg, Cronenberg’s hesitance to cast Walken because of his age (he turned 40 onset),  the details of how the book was written, the discussion of King’s work in The Dead Zone, the history of publishing the book and other King’s book during the time, the themes of the book and how they translated, the development of the film after the rights were purchased, the various directors and writers were attached including Walter Hill as the first choice for Debra Hill (no relations), the numerous differences between King’s book and Jeffery Boam’s adaptation, and much more.  Gingold does a great job of primarily focusing on the book itself and the adaptation though he does delve into personal asides, production anecdotes, and more.

The third new Audio Commentary with Film Historian/Author Dr. Steve Haberman And Filmmaker/Film Historian Constantine Nasr.  Opening with a quote from Cronenberg about film criticism.  Haberman and Nasr are regulars on Horror Films commentary tracks for Scream (listen to their tracks on The Brides of Dracula and Kiss of the Vampire of more great commentaries).  Details include comments on Cronenberg inability to record a commentary as he at the time of producing this disc is in the middle of production of a new film, Cronenberg’s adaptation being one of the best King adaptations, the removal of the film’s original opening, Cronenberg’s certain themes that come up in all his films like fixations on Cars, Body Horror, the adaptation changes by Boam and Cronenberg from the King novel and how that changed the focus of the film, the work of Stanley Donen before he left the film, the details of producing the massive WW2 set-piece, the rise of Cronenberg post-release of this film, the work of Herbert Lom, the work of Brooke Adams and Christopher Walken, Cronenberg’s films specifically being produced during the wintertime in Canada, this being one of Walken’s favorite roles, the use of Castlerock for the first time and why it was relocated to New Hampshire from New England, the work of Martin Sheen, and much more.  Haberman and Nasr never waste a moment during their track bringing the same sort of informative deeply researched commentaries we come to expect from them.

The final Audio Commentary with Film Music Historian Daniel Schweiger With Isolated Score Selections in a rare treat we’ve gotten a commentary and isolated score.  Schweiger discusses his history with composer Michael Kamen.  Details include a personal history of Kamen, his friendship with Mark Snow, beginning a rock band with Snow, his time at Julliard, working with Pink Floyd, the production and how Kamen was brought on though Howard Shore wanted Cronenberg, how Kamen was only given 3-weeks to complete, Kamen’s inspiration for the score, the eventual release of the score, and much more.  The isolated score selections are beautiful and sound amazing in a halfway decent home theater setup.  Note that the commentary is about 20-minutes in length, the isolated score is about 60-minutes in length.

Sarah’s Story (10:37) – is an all-new Interview with actor Brooke Adams.  The actor discusses how she began very young because her father was a Broadway producer.  Details include how she read the book, the romance of the piece, how she was cast with help of Christopher Walken, how she knew Walken and his family, the work of Martin Sheen in the film, and much more.

Cold Visions: Producing The Dead Zone (20:32)– is an all-new featurette featuring interviews with Production Manager John M. Eckert and Associate Producer Jeffrey Chernov about the making of the film.  Details include how Debra Hill became produced the film, what a Production manager does, how Chernov started as a Second AD for Carpenter and Hill on Escape from New York which led to Hill hiring him as Associate Producer, their memories of Dino DeLaurentis as a producer, how they came upon Toronto and the various locations, working with Christopher Walken, and much more.  There are some great behind-the-scenes photographs including on this featurette.

Trailers From Hell (2:11) – Mick Garris provides a micro-commentary on the trailer for The Dead Zone.

Memories From The Dead Zone (1219) – is an archival featurette with director David Cronenberg, actor Brooke Adams, and King Historian Douglas E Winter.  The featurette discusses how the book was written, its success as a best seller, and the eventual adaptation and development of the source material.

The Look of The Dead Zone (9:25) – is an archival featurette with comments by director David Cronenberg, director of photography Mark Irwin, and King Historian Douglas E Winter.  The focus here is the visual style, shooting Canada for America, and how certain FX set pieces were achieved.

Visions of The Dead Zone (9:44) – is an archival featurette with comments by director David Cronenberg, and director of photography Mark Irwin.  This featurette focuses on the horror set pieces of the film, specifically the visions Johnny has, how it was developed away from the book and how they achieved the shocked reactions from Walken and also the extras.

The Politics of The Dead Zone (11:34) – is an archival featurette with comments by director David Cronenberg, director of photography Mark Irwin, editor Ronald Sanders, actor Martin Sheen, and King Historian Douglas E Winter.  Focusing on the politics of Greg Stillson is very prescient to current politics.

Behind The Scenes Still Gallery (13:10) – covering well over 100 images the still gallery cannot be navigated though can be paused.  There are some truly great behind-the-scenes photos of sets, cast, and crew including some great photos from some of the biggest set pieces in the film giving you an idea of how they were achieved.

The Dead Zone is a classic horror film.  Scream Factory has given it the deluxe treatment it deserves.  Highest Possible Recommendations!

Scream Factory’s Blu-Ray Edition of The Dead Zone is out July 27th!