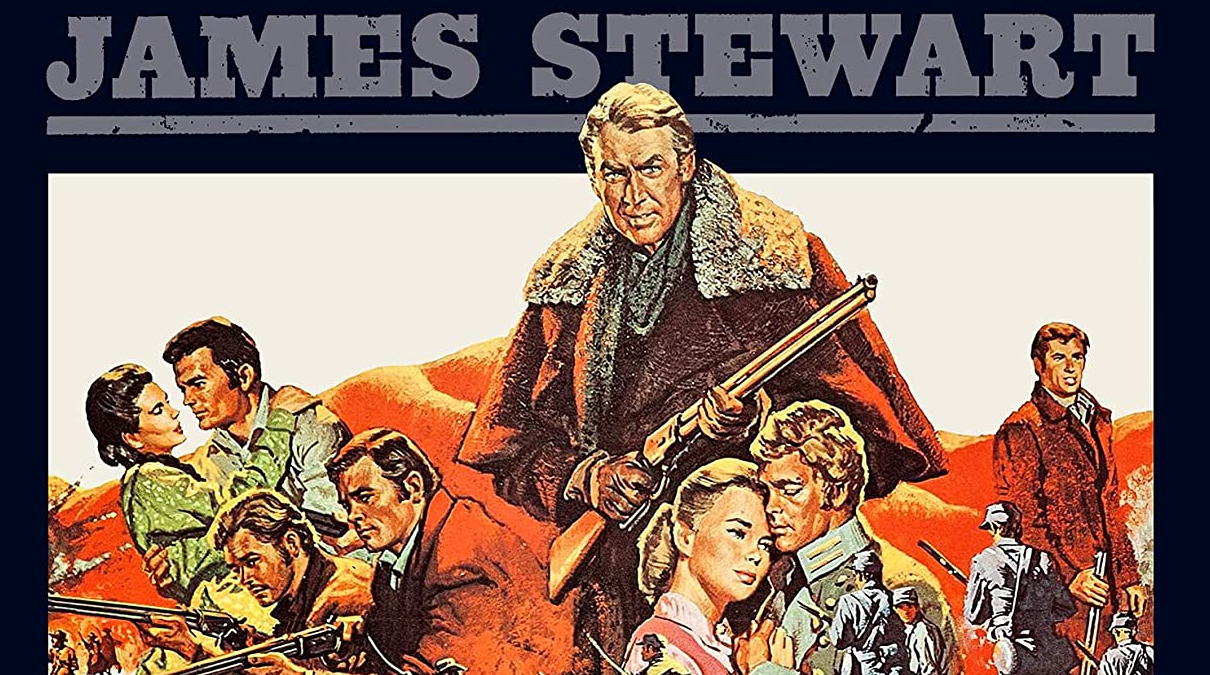 James Stewart is a crusty old father in the middle of the Civil War in the Western Shenandoah.  Kino Lorber’s Blu-Ray features a solid transfer and special features.

Circumstance.  That seems to be what Shenandoah wants you to believe during the whole of its runtime.  It’s great to see Stewart in the craggy grump phase of his Stardom but everything seems to be aimed towards the “they were so bad” philosophy.

Charlie Anderson (Stewart) is the stern patriarch of the Anderson clan.  The farm he presides over in Virginia with his six sons and two daughters is a fruitful one.  He has no time for the Civil War going on.  Not for the South.  Not for the North.  No one but his family.  No sooner than you can say DOM TORRETTO, Anderson is thrust into a desperate search for his youngest son that leads him to Union and Confederate soldiers’ camps and back home.

Shenandoah wants to take a humanist portrait of a situation that does not need it.  We don’t need to humanize Confederate soldiers. We don’t need to villainize Union soldiers.  Though screenwriter James Lee Barrett seems intent on it, which creates a murky view of the Civil War.  Murk is not anything anyone needed in this situation. Or any Civil War film for that matter.  The anti-war message is nice and unexpected but is betrayed by its ever-present need to make Confederates “misunderstood”.

James Stewart is the singular reason to see this film.  In the later era of his career, Stewart seems to be freed from the wholesomeness to play characters with more shading.  Though not as amazing as his work with Anthony Mann, Shenandoah shows Stewart as the conflicted father.  One that has seen more hurt and pain than he would like to admit.  The final moments in the graveyard are exactly what inspired Tom Hanks in Forrest Gump.

Andrew V McLaglen keeps everything moving along with a focus on the human-scale drama rather than the action.  The action scenes are pedestrian at best but with a focus on dramaturgy, it makes sense they would be slight.  Watching this film only makes me realize one thing; We don’t need any more Civil War films period.  End of Discussion.

The transfer provided to Kino Lorber by Universal is a solid albeit older transfer.  The color reproduction is good, contrast levels are good, black level is too.  It’s generally a handsome image free of dirt, specks, and scratches.

The New Commentary by Michael F. Blake, C. Courtney Joyner and Constantine Nasr beginning with a discussion of the creation of the film and its script by James Lee Barrett.  Details include where Universal was as a Movie Studio, James Stewart career and work in the film, the work of Andrew McLaglen in the film and during his career, the historical context of the film, the western as a whole, and how this film fits into the history of the genre, the casting and work of Katharine Ross, the casting and work of Patrick Wayne, how much control that Stewart had over the production, the comedy and pathos mixture of the piece, the production filming in Oregon rather than Virginia, the ingenious use of the Johnny Reb “hat”, the success of the film, the work of George Kennedy, the production design by the Universal team of Alexander Golitzen and Alfred Sweeny, Albert Whitlock’s Matte Paintings, the finale and lack of awards recognition though box office success, and much more.  Joyner, Nasr, and later Blake all do a fascinating track that really delves deeply into the film.  Even if this reviewer did not like the film’s murky thematics all three contribute to a fascinating and vital commentary track.

THE DEFIANT VIRGINIAN: Super 8mm Short (8:20) – which is the Super8 version of Shenandoah is a fun featurette.  The Black & White version gets the general gist of the entire film in an 8th of the time.  No restoration whatsoever was done with the image so what you see is what you get.  NOTE: this Super8 version it is presented with no audio.

Shenandoah is Stewart at his best.  The commentary track provided by Kino Lorber is a fascinating deep dive into the production.